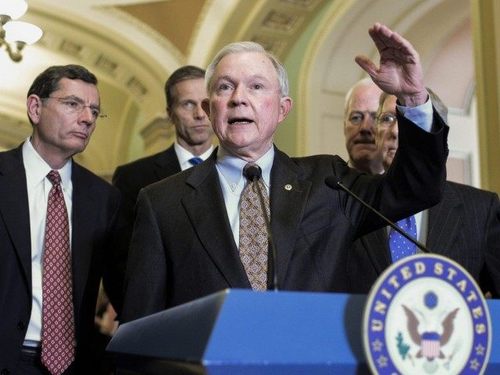 Senator Sessions issued a press release on Monday along with a related chart showing the extreme effect of unrestrained immigration.

The tiny boxed type in the graphic below reads: “A new report from Pew Research projects that, absent new immigration, the U.S. population will grow another 14 million between now and 2065. This 14 million is the net difference between births and deaths. The Pew Research Center further projects that the federal government, exclusively through immigration policy, will add 103 million future residents to the U.S. population (new immigrants and their descendants).” 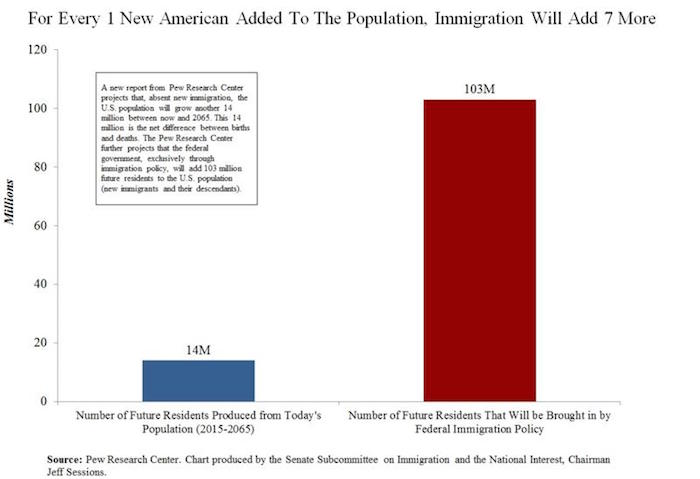 Listen to the audio clip below:

SESSIONS: “I love America. I believe I’m an elected official. And who puts me in office? […] The people who should benefit from my actions are the American people. That’s who should be first. Some people seem to think they represent groups, they seem to think we represent the whole world, they think we represent business groups, and activist groups and La Raza or the Chamber of Commerce, and we’re losing sight of who we represent. And it’s absolutely clear that too large a flow of [foreign] workers, particularly lower skilled workers, hammer American workers, damage their ability to get a pay raise or even get a job. That’s not disputable. That matter has been settled. And someone needs to be worried about those people… I think that’s been lost sight of in your nation’s capital.”

Clearly the immigration system has grown into a system for destroying the American nation by demographic warfare, which works very well for Democrats who could never convince traditional citizens to give up their traditional values for socialism lite. And too many Republicans have gone along for the short-term financial gain.

Senator Sessions recommends that the extreme level of legal immigration should be decreased for the good of the people. Actually, given the rapidly automating workplace, the appropriate number of immigrants is ZERO.

Subcommittee Chart: For Every 1 New American Added to the Population, Immigration Will Add 7 More, October 4, 2015

Background from the Subcommittee on Immigration and the National Interest:

October 3rd marked the 50th anniversary of the Immigration and Nationality Act. According to Pew Research, in the five decades since the Act’s adoption, 59 million immigrants have entered the United States.  Pew further estimates that, including the descendants of those new arrivals, immigration policy added 72 million people to the population of the United States. In 1970, fewer than 1 in 21 Americans were foreign-born; today, nearly 1 in 7 are foreign-born. The United States has taken in four times more worldwide immigrants than any other nation on Earth. Over the next five decades, Pew projects that new immigration, including the descendants of those new immigrants, will add 103 million to the current U.S. population. The net addition of 103 million new persons is exclusively the result of new immigration of persons not currently in the U.S. The 103 million figure does not include any immigrants currently in the U.S. or their future children.  (As a side note: Pew data shows that new foreign-born arrivals will not lower today’s median U.S. age of 38; Pew estimates the median age of the foreign-born in 2065 will approach 53.)

Pew also found that, by more than a 3-1 margin, Americans wished to see immigration rates reduced – not raised. Unless such reductions are enacted, the foreign-born share of the U.S. population will soon eclipse the highest levels ever recorded in U.S. history and will keep climbing to new all-time records every decade of the 21st century. Pew projects that by 2065, more than 1 in 3 U.S. residents will either be foreign-born or have foreign-born parents, assuming no law is passed to reduce immigration rates. By contrast, in the 20th century, after the foreign-born population share peak reached in 1910, immigration was reduced for the next six consecutive decades.

Lower-income workers, including millions of prior immigrants, are among those most severely impacted by the vast inflow of new workers competing for the same jobs at lower wages. Across the economy, average hourly wages are lower today than in 1973, while the share of people not working is at nearly a four-decade high. Yet the Senate’s Gang of Eight bill would have tripled green card issuances over the next decade (issuing more new green cards than the entire population of Texas) and the industry-backed I-squared bill would triple admission of new H-1B foreign workers provided to technology corporations as low-wage substitutes for their existing workers.

“We should not admit people in larger numbers than we can reasonably expect to vet, assimilate, and absorb into our schools, communities, and labor markets. It is not compassionate but uncaring to bring in so many people that there are not enough jobs for them or the people already here. Over the last four decades, immigration levels have quadrupled. The Census Bureau projects that we will add another 14 million immigrants over the next decade. It is not mainstream, but extreme, to continue surging immigration beyond all historical precedent. It is time for moderation to prevail, and for us to focus on improving the jobs, wages, and security of the 300 million people already living inside our borders.”

Polling from Kellyanne Conway shows that, by nearly a 10-1 margin, Americans of all backgrounds are united in their belief that companies should raise wages and improve working conditions for people already living in the United States – instead of bringing in new labor from abroad.