Demography can be unkind when allowed to run amok. Washington’s diversity immigration machine is set on auto-pilot, and is having the effect of increasingly making America culturally dissimilar to the nation’s founders. The post-national globalist elites don’t like the traditional citizen (who is conservative) and have been importing a new people who are culturally friendlier to big government, e.g. Mexicans.

The early warning system of demographic change is kindergarten. If you think the bus is diverse, check out the playground.

The kindergarten class of 2010-11 is less white, less black, more Asian and much more Hispanic than in 2000, reflecting the nation’s rapid racial and ethnic transformation. The profile of the 4 million children starting kindergarten reveals the startling changes the USA has undergone the past decade and offers a glimpse of its future. In this year’s class, for example, about one out of four 5-year-olds will be Hispanic. Most of today’s kindergartners will graduate from high school in 2023.

More Hispanic children are likely in the next generation because the number of Hispanic girls entering childbearing years is up more than 30% this decade, says Kenneth Johnson, demographer at the University of New Hampshire’s Carsey Institute. “It’s only the beginning.”

A USA TODAY analysis of the most recent government surveys shows:

“This is not just a big-city phenomenon,” Johnson says. “The percentage of minority children is growing faster in the suburbs and in rural areas.”

In Lake County, Ind., a Chicago suburb, the under-20 population went from 51.8% white in 2000 to 47.1% in 2008, Johnson’s research shows. In rural Nebraska’s Colfax and Dakota counties, the share of Hispanic youths is rising while young whites are down from 60% to about 45% in the same period.

“That makes issues of language development and how to teach them even more important than 10 years ago,” says W. Steven Barnett, co-director of the National Institute for Early Education Research at Rutgers University. “In some districts, 40% of their kids are Latino, and 4% of their teachers are. It’s a huge gap.”

Below, in 2008 Atlanta Bolton Academy students celebrate Hispanic Heritage Month with potluck and piñatas. They are wearing paper sombrero hats to get into the appropriate mood. So kiddies are taught from their earliest school experience to embrace diversity, rather than learn American traditions (well explained in The Civic Education America Needs by Victor Davis Hanson). 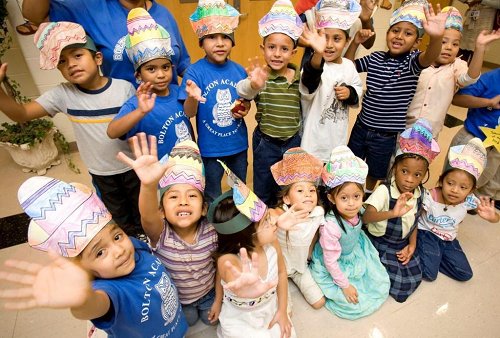