We know that Democrats’ immediate reaction to anyone who disagrees with them is to shriek “Racist!” However, America’s Senator Jeff Sessions being named as the Attorney General does pose a genuine threat to the liberal agenda of turning America into a diverse socialist hellhole — thus the overwrought howls.

Democrats may have learned from the election that traditional Americans cannot be browbeaten into choosing the leftward path, so Dems will need to import even more culturally big-government immigrants like Mexicans to achieve their goals. So the Ds appear to think, judging from their current hysteria.

A genuinely tough immigration enforcer as AG is a threat to Democrat dreams of dominance in politics, and Jeff Sessions must therefore be destroyed.

Interestingly, on Monday Senator Sessions’ one-time Legislative Counsel William Smith appeared on Fox News to discuss his experience of working with the Alabama Republican. Smith was the first African-American Chief Counsel on the Senate Judiciary Committee and was hired by the senator. Smith explained how Sessions “prosecuted the head of the KKK, made sure that he received the death penalty [in a murder case]; he desegregated schools in Alabama and I think you might have a picture of John Lewis and Jeff Sessions walking hand-in-hand across the Edmund Pettus Bridge.”

Below, Senator Jeff Sessions joined civil rights icon John Lewis and others for the 50th Anniversary of “Bloody Sunday,” in Selma to march across the Edmund Pettus Bridge, known for violence against civil rights marchers in 1965. 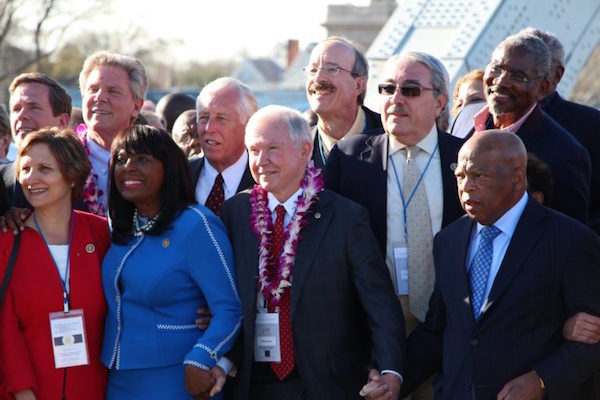 It’s curious to see black American leaders (particularly media elites like Al Sharpton) gripe about the nation’s most dedicated immigration enforcer, when a shutdown of the open border would benefit blacks probably more than any other group. Deporting the Mexican job thieves would open many blue collar occupations in construction and similar industries like home renovation. But black leaders care little for actual improvement in the lives of the people they claim to represent, judging from their policies.

Columnist Byron York calls the Sessions nomination a “nightmare” for Democrats because he is the “most determined, and most knowledgeable opponent of comprehensive immigration reform” and is the perfect person to obliterate Obama’s anti-America non-enforcement strategy.

President-elect Trump’s transition team knew that nominating Jeff Sessions for Attorney General would set off controversy. Democrats and their allies in the press have at key times in the past called Sessions a racist — they’re now using the Alabama senator’s full name, Jefferson Beauregard Sessions III, to heighten the Old South effect — and now, as they oppose Trump at nearly every turn, they’ve turned to race again.

Here’s why the effort to stop Sessions is likely to intensify as his confirmation hearings near. Sessions is the Senate’s highest-profile, most determined, and most knowledgeable opponent of comprehensive immigration reform. Democrats are particularly anxious about immigration because of the unusually tenuous nature of President Obama’s policies on the issue. Those policies can be undone unilaterally, by the new president in some cases, and by the attorney general and head of homeland security in other cases. There’s no need for congressional action — and no way for House or Senate Democrats to slow or stop it.

There are extensive, and in some cases, strict immigration laws on the books, passed by bipartisan majorities of Congress. Obama wanted Congress to change those laws. Congress declined. So Obama stopped enforcing provisions of the law that he did not like. A new administration could simply resume enforcement of the law — a move that by itself would bring a huge change to immigration practices in the United States. No congressional approval needed.

Many of those laws have been loosened or, in some cases, completely ignored by the Obama administration. A Trump administration would not need to ask Congress to pass any new laws to deal with illegal immigration. If there was a presidential order involved in Obama’s non-enforcement, Trump could undo it, and if there were Justice Department directives involved, Sessions could undo them, and if there are Department of Homeland Security directives involved, the still-to-be-nominated secretary could undo them.

“It will be possible for the Trump administration to dramatically increase enforcement of immigration laws by using what is now on the books,” notes Jessica Vaughan, director of policy studies at the Center for Immigration Studies, which advocates reducing immigration into the U.S.

One of the immediate changes would be to get rid of Obama’s Priority Enforcement Program, instituted in 2014. Known as PEP, the program made it almost impossible for Immigration and Customs Enforcement to even begin deportation proceedings until an illegal immigrant has been convicted of an aggravated felony or multiple misdemeanors. Obama’s policy “forced local ICE offices to release of thousands of deportable criminals,” Vaughan has noted, “including Eswin Mejia, an illegal alien with prior arrests who killed 21-year old Sarah Root in Omaha, Neb., while drag-racing drunk in January of this year. Like many of the 86,000 convicted criminals released by ICE since 2013, Mejia is now a fugitive but considered a ‘non-criminal,’ because he has yet to be tried and convicted for Root’s death.”

President Trump could throw PEP out the window. And that would be just a start. The Center for Immigration Studies has published a list of 79 Obama policies the new administration could change without any action by Congress. (The list was compiled in April 2016, before anyone could know who the next president would be.) Among them:

1) End the embargo on worksite enforcement. “Experience has shown that employers respond very quickly and voluntarily implement compliance measures when there is an uptick in enforcement,” Vaughan notes, “because they see the potential damage to their operations and public image for being caught and prosecuted.”

2) Restore ICE’s authority to make expedited removals of illegal immigrants who are felons or who have recently crossed into the United States.

3) Tighten requirements for H-1B visas, including banning such visas for low-salary, low-skill jobs, revoking visas that are followed by layoffs of American workers, and other measures.

The Justice Department, among other federal agencies, hands out billions of dollars in federal grants. In instructing grant recipients to comply with federal law, the Obama administration ignored 8 USC 1373; in September, the Justice Department inspector general told a House committee that, “we found that the Department had not provided grant recipients with clear guidance as to whether Section 1373 was an applicable federal law with which recipients were expected to comply.”

Attorney General Jeff Sessions could change that, and, as a result, many cities would find it harder to defy federal law. “For the diehards who do not respond to incentives or changed policies (like Chicago, San Francisco, Philadelphia, etc.),” writes Vaughan, “he could look at prosecution under 8 USC 1324, which prohibits shielding illegal aliens from detection.”

Those are just a few of the things a Trump administration, and an Attorney General Sessions, could do using executive authority. It’s not hard to see why Democrats want to stop them.

Of course, Democrats on the Senate Judiciary Committee, which will handle the Sessions nomination, cannot very well say to the nominee: “I will not support you because you might actually enforce the law.” So they need another basis on which to oppose Sessions. That’s where 30-plus year-old allegations come in.

Republicans, with a narrow majority in the Senate, should be able confirm their colleague, especially since soon-to-be-former Sen. Harry Reid nuked the minority’s ability to filibuster executive branch nominations. But before that happens, look for the noise and the anger over the Sessions nomination to increase. There’s too much at stake for Democrats to go along.