Illegal alien crimes followed by repeated deportations and re-entries are infuriating to knowledgeable Americans who care about sovereignty and public safety. A recent case of that sort occurred last month near San Diego, where a 15-times-deported Mexican drove drunk into an American family’s car and critically injured a little boy.

A drunken driving suspect in a hit-and-run crash that severely injured a 6-year-old boy in San Ysidro over the weekend had been deported from the U.S. at least 15 times, authorities said Tuesday.

Below, six-year-old Lennox Lake was seriously injured when a drunk illegal alien Mexican smashed his truck into the Lake car. 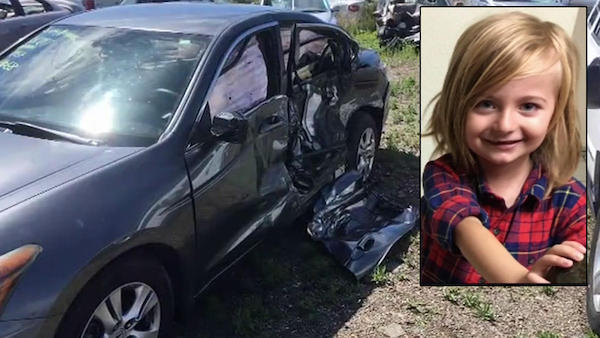 A May 29 news article reported that Lennox is still hospitalized from the May 6 crash.

This preventable illegal alien crime was the background for a recent report about the implementation of tough enforcement against criminal aliens by Attorney General Jeff Sessions and the inclusion of Kate’s Law into a bill now being constructed in the Congress:

WILLIAM LA JEUNESSE: This guy’s record reflects policy in the last decade. It wasn’t a mistake and it explains why the new Attorney General supports Kate’s Law to impose a mandatory five-year minimum for illegal immigrants who are caught re-entering the US after being deported. So here is Constantino Banda-Acosta after a night of heavy drinking and nearly killing a family near San Diego.

So why wasn’t he in jail? Well remember with the Obama policy of prosecutorial discretion? That directed US Attorneys to only file charges against most serious criminal aliens that allowed many to stay in the US but also gave Mexicans who were deported a free pass to go home without a criminal record, and that’s what happened here. Numerous times Acosta was caught entering illegally using fake documents or sneaking over the border, and the US Attorney gave him a free pass; even after arrest for DUI domestic violence, prosecutors using their discretion refused to prosecute. That is why the new administration bill opposes sanctuary-lite policies that allow misdemeanor criminal aliens to stay in the US indefinitely.

BILL HEMMER: So what does Senator Grassley want and how would Kate’s Law prevent similar incidents, if at all, William?

LA JEUNESSE: After entering illegally the second time, Banda-Acosta would have gone to jail for five years mandatory minimum, and this six-year-old that you see here would not have been found almost dead on the highway. It explains Sessions’ new orders for prosecutors to charge and pursue the most serious offenses.

ATTORNEY GENERAL JEFF SESSIONS: People who re-enter having been convicted of a crime, they get deported and they come right back. So you can’t just deport them again: they have to be punished, and that sends a message more and more that you shouldn’t come back. And if we build a wall and deport them, they’re not coming back.

LA JEUNESSE: So Democrats blocked Kate’s Law in 2015 and 16 but the same language of Kate’s Law is now resurfacing the border security bill the GOP hopes to pass this year.

Here’s some background on the illegal alien enforcement legislation now in the Congress:

Republicans are going on the offensive with “Kate’s Law,” seeking to fulfill one of President Trump’s most high-profile promises while putting Democrats on defense over illegal immigration.

During the presidential campaign, Trump highlighted the murder of 32-year-old Kathryn Steinle, who was shot by a Mexican immigrant who had unlawfully re-entered the country after being convicted of a separate crime and deported.

Now, Republicans are working on legislation to impose a mandatory five-year minimum prison sentence for immigrants who have twice been charged with illegally re-entering the country or have prior aggravated felony convictions.

Language for Kate’s Law is tucked into a border security bill that Sen. John Cornyn (R-Texas) and House Homeland Security Committee Chairman Michael McCaul (R-Texas) are working on, according to a draft copy reviewed by The Hill.

The bill, which Senate Democrats successfully blocked in 2015 and 2016, is a priority for Trump.

A May 2 tweet from Rabbi Shmuley Boteach shows him and White House strategist Stephen Bannon standing in front of a whiteboard with Bannon’s to-do list. The words “pass ‘Kate’s law’” are visible under the header “Pledges on Immigration.”

The White House did not respond to a request for comment on the Republican proposal.

In addition to Kate’s Law, the larger border security bill includes provisions to add 10,000 detention beds each year for the next four years, increase the number of border patrol agents from 21,000 to 26,370 and require U.S. attorneys to prosecute people who are caught within 100 miles of crossing the southern border.

“It’s a one-size-fits-all justice that is going to produce sentences that don’t fit the person’s circumstances or facts of life,” Chen said. “People who have lived here a long time may go to visit family in Mexico and then get picked up on the way back in.”

While Republicans appear to be pushing the measure in the name of national security, immigration advocates claim Democrats are on strong footing to once again oppose the proposal.

Philip Wolgin, managing director for the immigration policy team at the liberal Center for American Progress, claims Trump’s tougher stance on immigration enforcement has actually made communities more dangerous because fewer immigrants are willing to report rape, sexual assault and crimes to police.

“It’s laughable you could claim this is about national security or community safety,” he said.

A March McClatchy-Marist survey found that 80 percent of Americans favor providing a way for undocumented immigrants to gain legal U.S. citizenship if they meet certain criteria.

The poll found that opinion to be bipartisan, with 69 percent of Republicans saying they would favor such a move if undocumented immigrants learn English, pay fines and have jobs that pay taxes.

In a statement to The Hill, Rep. Luis Gutiérrez (D-Ill.), who chairs the Immigration Taskforce of the Congressional Hispanic Caucus, said Cornyn has forged a partnership with GOP opponents of legal immigration to help thwart immigration reforms that would improve border security and increase overall legality and accountability.

“I’m sure whatever he and Rep. McCaul come up with will be popular with the White House and Trump’s base, but the problem they face is that American voters think we need more practical solutions than walls and round-ups,” he said.

Ira Mehlman, a spokesman for the Federation for American Immigration Reform, a group that supports Kate’s Law, said there has to be more of a deterrent for people who re-enter the country illegally.

“If people understand [that] if they get caught they might go to prison, then they might not try to come back,” he said. “We might not have as many people going to prison because the threat of getting caught is enough to stop them from coming in the first place.”

Mehlman said illegal border crossings are already down under Trump, noting that the first brick of his much-touted proposed border wall has yet to be laid.

“Illegal aliens are rational people, and they come when they don’t think we are enforcing our laws,” Mehlman said. “It’s our policies that have been irrational up until fairly recently.”

Lynn Tramonte, deputy director of the liberal America’s Voice, wonders if Cornyn and McCaul included Kate’s Law to get groups supportive of reduced immigration to back their border bill.

“The problem is, the more radical they make their bill, the less likely it is to pass,” she said in a statement to The Hill. “Our immigration laws are already harsh and extreme. They already bend toward deportation over family unification.”

At some point, Tramonte said, reasonable minds in the Senate will be forced to ask a key question: Do we really need more punishing immigration laws?

“If Cornyn and McCaul wanted to work on real solutions, they would work on reform that includes a path to citizenship for aspiring Americans,” she said. “That’s the type of change in law that would actually move this country forward.”