Amazon’s automated warehouses continue to show how rapidly smart machines are taking over tasks that were performed by humans. A few years ago, workers pushed carts for miles around the warehouse picking out items for customer orders. Huffpo reported in 2011, “Some workers at Amazon.com’s Allentown, Pennsylvania warehouse are reportedly willing to contend with working at a brutal pace in dizzying heat so long as it means having a job.”

Was that only five years ago? It shows how quickly an industry can change when modern automation is applied.

Now the Amazon warehouse is immersed in tech, and other companies are turning to automation as the capability of the machines improves. For example, Walmart announced early this month that it was six to nine months from using drones within its warehouses to do inventory, cutting the time of that chore from one month to one day.

San Jose California is a part of Silicon Valley, and naturally awareness of tech issues is high there. The home town Mercury News had a front-page spread on Sunday that focused on the employment threat presented by robots, as represented by the automation powerhouse that Amazon has become. The paper tried to draw a fine line, cheering the advances of robots and the jobs added to the nearby Amazon warehouse in Tracy while also observing the long-term inevitable job loss. 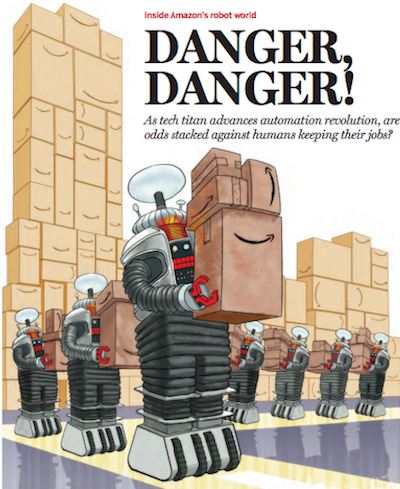 Despite the Mercury’s happy talk, the clear trend is for hugely fewer jobs in the future because of automation. Warehouse worker is one of millions of ordinary occupations that have disappeared since the great recession began, the result being that the choices for job seekers have shrunk enormously. Oxford University researchers predicted in 2013 that nearly half of American jobs could be automated within 20 years. The Gartner technology consultants predict that one-third of US jobs will be done by a computer or robot by 2025. That’s a grim future that no political leaders even mention.

Certainly within such a dire employment prospects, it makes no sense for Washington to continue importing millions of unnecessary immigrant workers. In fact…

Amazon’s success has led to employment growth for the time being, but improving technology means fewer jobs later on. How do these brilliant captains of industry like Jeff Bezos expect the economy to run when half or more of the jobs (and paychecks!) have disappeared?

TRACY — In Amazon’s million-square-foot order-filling warehouse, two low-slung orange robots carrying stacks of consumer products are zipping across the floor, headed right at each other. One stops — not on a dime, it turns out, but rather over a QR code stuck to the floor — and allows the other to proceed, carrying inventory to a human worker who will pluck out an item, scan it and send it off for packing and shipping.

In this building the size of 28 football fields, containing four miles of conveyor belts and 15 million items awaiting customer orders from Northern California and beyond, the two limbless goods-moving machines are part of Amazon’s 30,000-strong robot army. Gliding in straight lines on a grid, separated from workers by chain-link fencing with signs warning people to keep out, the machines can lift and carry up to 750 pounds of retail products.

Seattle-based Amazon has pushed itself to the forefront of the robotics revolution, deploying robots in 15 U.S. fulfillment centers over the past four years. It has leased a fleet of 20 jumbo jets to further speed deliveries as an estimated 54 million Americans have flocked to its two-day-delivery Prime service.

The company says its superhuman robots have created far more jobs than they’ve taken, but experts say that employment trend will reverse as machines grow increasingly sophisticated and climb ever higher on the job-skills ladder, bumping Homo sapiens to the side.

“There was very little appreciable progress (in robotics) for a long time. Now we’re in an era where that progress is occurring,” said MIT economist David Autor.

But Amazon says the advancement won’t come at its workers’ expense. Two years ago, the e-commerce titan opened the Tracy facility with 1,500 full-time, permanent employees. Now, there are more than 3,000, company spokeswoman Ashley Robinson said. The job gains here that result from automation of certain tasks are seen across Amazon’s robot-equipped warehouses, Robinson said.

“It’s all about efficiency. It’s all about getting the boxes out to customers as quickly as we can. In a building without robotics it can take hours to fulfill an order. In this building it can take minutes,” Robinson said. “We’ve been able to build our workforce in this building because the robots have allowed us to fulfill more customer demand. It allows us to keep growing and growing.”

Michael Keele, 23, of Tracy, had been employed in other firms’ warehouses before arriving at Amazon 11 months ago and encountering his new robot colleagues. “It kind of blew my mind,” said Keele, a “stower” responsible for putting items into inventory. “It was very different to see a product actually brought to you. It makes it a lot easier because you don’t have to move around and exhaust yourself as much.” Keele doesn’t worry about getting replaced by a robot. “They’re going to need people to do certain things that the robots can’t do,” Keele said.

True — for now. While Amazon touts job-creation, it is actively supporting robotic technology that would eliminate many warehouse jobs.

Amazon’s robots showcase automation technology as it readies for blastoff: Advances in the past few years in artificial intelligence (AI) and engineering let robots “see,” “hear” and “feel” via lasers, lenses and other sensors. Machines can be fed data and simulations to “learn” far faster than humans, “think” via evolving algorithms, and outperform people in growing areas of reasoning and decision-making. And machines are becoming increasingly dexterous, using multi-jointed arms and even robotic hands to transform industrial processes.

Many of those advances spring from Silicon Valley, where more than 100 robotics firms raked in $1 billion in funding in 2015, equal to the amount received over the previous five years combined, according to Silicon Valley Robotics, an industry group. The artificial intelligence and big-data processing behind Google’s AlphaGo — which beat the 18-time world champion in the world’s hardest board game, Go — have turbo-charged robotics. Google’s self-driving cars further highlight the pace of change: The project began in 2009 and now the vehicles have driven themselves on more than 1.5 million miles of public road.

In the Tracy warehouse, a few work stations down from Keele, Renee Plascencia, 20, said she appreciated the novelty of the robots, and how they reduce the need to walk long distances in the colossal warehouse. Did Plascencia, a stower, worry about being automated out of a job? “Honestly, yeah,” Plascencia said. “Sooner or later they’re going to have robots doing what we do.”

By now, many purely manual jobs in factories and warehouses have been automated, but much of Amazon’s fulfillment center requires human-only skills, said MIT’s Autor, who has studied the online marketplace giant. “We don’t actually have dexterous robots that can do that work with any reliability,” Autor said.

Amazon’s workers — including the stowers, the “pickers” who take items from inventory to send to the “packers” — need to handle fragile items and watch for irregularities. “Amazon does not want to ship you a book that has rat droppings on it,” Autor said.

Amazon’s robots have brought order where before it was lacking, said analyst Bharath Kanniappan at market research firm Technavio. “(Robots) act as the perfect solution for the confusion, stress, chaos, misconception and misalignment which were regular in Amazon’s fulfillment centers before robotics implementation,” Kanniappan said by email. After the robots arrived, “the company witnessed a drastic decline in customer complaints regarding wrong/mistaken delivery, delay and damaged product delivery,” he said.

Retail e-commerce is expected to grow 13 percent by 2020 from 2015 levels as robotics advances, and many companies in the sector will add or increase automation for materials handling, potentially starting to cut warehouse-job recruitment in three years, said Kanniappan.

This month, the stakes abruptly rose for Amazon. In a threat to the firm’s web-commerce dominance, the world’s biggest retailer, Walmart, with its 6,000 big-rig trucks, announced it would invest $2 billion in e-commerce and pilot two-day delivery, putting its service right on the heels of Amazon’s expedited one- and two-day delivery.

Amazon has announced that this year’s contest will add a “stow task.” The company in May won a patent for robot-aided stowing that says, “some or all of the activities described as being performed by a human operator may be performed by automated mechanisms.”

Amazon’s Robinson said the picking challenge was intended to strengthen ties between industry and academia and to share solutions to automation problems. The company does not foresee robots replacing pickers and stowers, Robinson said.

Robot-fueled hiring gains at Amazon probably mean fewer jobs at competitors losing market share to the company, said Autor of MIT. “It’s hugely unlikely that it would actually increase in net the total number of warehouse jobs,” Autor said. “Automation almost always replaces some part of what we do. It has not historically had the effect of reducing employment overall but … it certainly displaces some workers.”