Almost a Million Pygmies in Africa 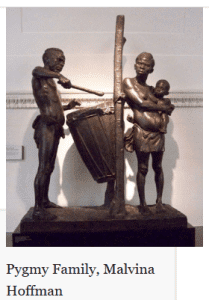 Be honest: pygmies don’t sound as though they actually exist. Homer Simpson could have added them to his observation, “Lisa, vampires are make-believe, like elves, gremlins, and Eskimos.”

But there are quite a few of them. From the New York Times:

There are about 920,000 pygmies in central Africa, but their forest communities are fragmented and endangered by logging, mining and land clearance, according to a consortium of researchers who collaborated to create the first scientific estimate of the size of the population.

Because there is so little census data on pygmies, especially in the Democratic Republic of Congo, where most of them live, the survey relied on techniques normally used for counting animals and plants.

The authors gathered data from 26 collaborators, including anthropologists, biologists and human rights groups.

Starting with the known locations and habits of 654 pygmy camps in five countries, the scientists mapped out grids of terrain across central Africa where similar camps could exist.

There are also populations around the Indian Ocean and southwestern Pacific that are pygmy in size, but don’t appear to be closely related genealogically to the pygmies of Africa. My impression is that these groups are much fewer in number. For example, there are 20th Century photographs of pygmy-sized people in the jungle of northeastern Australia, but nobody has seen any in recent decades.

Interestingly, the NYT still uses the term “pygmy,” which sounds like the kind of thing you aren’t supposed to say. Wikipedia explains:

The term pygmy is sometimes considered pejorative. However, there is no single term to replace it. Many prefer to be identified by their ethnicity, such as the Aka (Mbenga), Baka, Mbuti, and Twa.

The same is true for numerous other ethnic names, but that doesn’t stop them from changing names. For example, the Canadian insistence that Eskimo is a slur and must be replaced by Inuit irritates the non-Inuit Yupik Eskimos of Alaska. But perhaps this urge among white people to change the names of nonwhite peoples to embarrass and befuddle other white people is finally receding?

What seems to be strengthening is the prejudice against mentioning differences in average physique among racial groups. For example, this NYT article goes on to with four paragraphs of useful introductory information about pygmies, e.g., “Genetically, they are related to the Khoisan people of southern Africa who speak “click” languages.” But there’s no mention of their height, even though, or because, that’s what readers would likely most like to know: “Just how short are pygmies?”