“If The Outfit* trusts him, you can trust him!”

I offer the above words as suggested campaign slogans, on the house, to Alexi Giannoulias, Illinois’ Democratic State Treasurer, who is running for the Illinois U.S. Senate seat vacated by the John Doe calling himself “Barack Obama.” 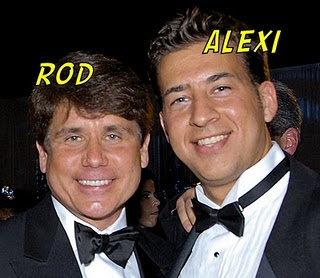 I learned about Giannoulias via my Oak Park, Illinois writer friend, Jim Bowman, in “The Trouble with Alexi.” Jim directs readers to a crackerjack campaign film,

“Video: Alexi Giannoulias - A Brief History,” made by Giannoulias’ GOP opponent, Cong. Mark Kirk, and which I picked up from The Illinois Review, formerly The Illinois Leader.

It seems that the Broadway Bank, which is 100 percent owned by the Giannoulias family, loaned $27 million to two mobsters, Michael Giorango and Demitri Stavropoulos, after they had been convicted and were awaiting sentencing. Broadway Bank’s chief loan officer and vice president at the time, who bragged that he ran every aspect of the bank’s operations: Alexi Giannoulias!

It’s all Greek to me.

But however Giannoulias’ electoral fortunes should pan out, he has proven himself eminently qualified to be an official in the “Obama” Administration.

As John Kass would say, it’s the Chicago Way.

[*“The Outfit” is Illinois slang for what is elsewhere referred to, variously, as “the Mafia,” “the Cosa Nostra,” or “the Mob.”]