I'm very sorry to report the death of a friend and long-time stalwart in the battle to save America. Alan Kuper, a retired physicist who was 84 years old, died Saturday in his home in Shaker Heights, near Cleveland. He was a tireless and honest environmentalist, a position that required him to include the issue of unsustainable immigration as part of his belief system.

I first became acquainted with Alan when I joined up with Sierrans for US Population Stabilization, as the group was known then (now SUSPS). He was one of the founders—long time members of the Sierra Club who were disgusted with the organization's disavowal of a responsible population policy in 1996 and decided to change it back, using the Club's democratic mechanisms.

Up to that time, the Sierra Club had stated policy goals that were entirely reasonable, e.g. "Immigration to the U.S. should be no greater than that which will permit achievement of population stabilization in the U.S." (1988). We had no idea then that the fix was in, that Sierra Executive Director Carl Pope was a pay-to-play guy who had sold the Sierra Club's integrity for $100 million. That "donation" to the Club came with ideological strings attached from Wall Street investor David Gelbaum (not revealed until the October 27, 2004 LA Times article The Man Behind theÂ Land). "I did tell Carl Pope in 1994 or 1995 that if they everÂ came out anti-immigration, they would never get a dollar fromÂ me," Gelbaum declared.

As a result, the Sierra Club changed from a non-partisan environmental organization to a far-left group whose new best friends were MoveOn.org (used to smear our top-notch Board candidates as racists) and leftist puppetmaster billionaire George Soros.

I explain this history because of all the people involved with SUSPS, Alan still thought he could work within the Sierra Club, despite the loss of its soul. He ran for a seat on the board even after the revelations about the Gelbaum affair, but never succeeded. That was a shame, because Alan was a devoted Sierra Club member, and continued to work for worthwhile issues despite the corruption at the top. At an earlier time, he was recognized nationally with a Special Achievement Award in 1994. He was a well known voice of the environmental movement in northern Ohio because of the public service radio announcements he presented over 25 years for a local radio station, noted in a local Sierra newsletter in 2006.

Starting in 2000, he created CUSP - Comprehensive (approach to) U.S. Sustainable Population in order to "raise awareness of the population-environment connection and to encourage reduction in U.S. population and consumption." The website includes an assessment of Congressional voting records as well.

Alan had an operation for stomach cancer at the end of October and was initially upbeat about his prospects. Then he got the bad news from the doctors which he sent around to his email recipients on Nov 6, that a pathology examination indicated an aggressive form of cancer, and he had less than a year to live. Sadly, his remaining time was far less than that.

Below, a photo from 1999 of several members of the SUSPS group, hiking on San Bruno Mountain south of San Francisco. That's Alan Kuper on the left, looking the way I will remember him. 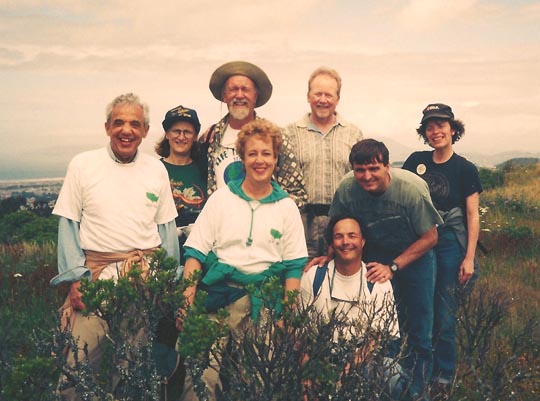