Alabama: Illegals Are Sneaking Back

Back when Alabama passed an immigration enforcement law described as being tougher than Arizonas, the open-borders Marxicans went nuts. You would have thought the Gestapo had been reborn and was about to round up thousands of illegal aliens. An SPLC mouthpiece called the use of workplace E-verify mean-spirited, racist even though those liberated jobs would become available for law-abiding Americans. 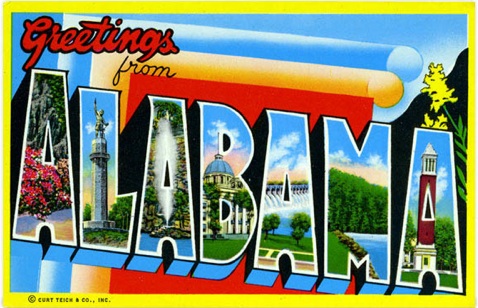 As intended, many foreign job thieves packed up and left. Those jobs did open up, allowing citizens to take them.

But now, some of those illegal aliens are moving back to Alabama. Apparently the state law was not tough enough.

Immigrants trickling back to Ala despite crackdown, Associated Press, February 19, 2012

Birmingham, Ala. (AP) Ana Jimenez and her husband were so terrified of being sent back to their native Mexico when Alabamas tough crackdown on illegal immigrants took effect that they fled more than 2,000 miles to Los Angeles, cramming into a two-bedroom apartment with more than 20 other relatives.

Now they are among the families coming back to cities like Birmingham, as the mass deportations never materialized and courts blocked parts of the law. No one knows how many people initially left the state, so its impossible to say how many have returned. But some illegal immigrants are trickling back, unable to find work elsewhere and missing the place that had been home for years.

Of 18 Hispanic immigrants interviewed by The Associated Press in the Birmingham area, six said they had friends or relatives who had returned to Alabama after fleeing because of the law.

As for Jimenez, she left Birmingham with her husband, father and brother three days after the law took effect. Now, all except her brother are back. Jimenez said through a translator that not much had changed, though she cant reclaim her job at a McDonalds restaurant because managers are checking citizenship papers.

Everything is the same. I just cant work now, Jimenez said through a translator. She said the family is living off the income of her husband, who installs carpet and flooring.

The Obama administration, immigrant groups and others sued over Alabamas law, and the 11th U.S. Circuit Court of Appeals is set to consider arguments about it on March 1. The U.S. Supreme Court will hear oral arguments a month later over Arizonas crackdown on illegal immigration, which isnt considered as strict as Alabamas.

Republicans who supported the crackdown had said they hoped the tough provisions — which made it difficult if not impossible to legally find work and housing, among other things — would force people to self-deport and move out of the state.

Among those who self-deported were Verenece Flores and her husband. They sold their home in metro Birmingham and moved with their three young children to Chicago. But the couple, originally from Mexico and living in the U.S. without legal documents, also could not find work, and relatives told them people werent being deported after traffic stops as some had feared.

The family is staying with relatives and doesnt have their own place, and Flores remains a little scared of the law. But she said she was happy to be back. Flores had lived here for 15 years before the short move to Chicago, and her children are happier and her husband is back working construction jobs.

I missed everything about it — friends, family, the weather, Flores said. She knows two more families that left Alabama for Washington state only to return.

Estela Fuentes said friends of hers moved to Atlanta because the law required that public schools verify the citizenship status of students, yet they returned late last month after learning courts had put that section of the law on hold. The family was sad throughout its exile to Georgia, she said through a translator.

One of their daughters cried and cried because she had no friends over there, said Fuentes, who is originally from El Salvador.

And while there are families returning, some officials say they havent heard anything to suggest the numbers are huge. Zayne Smith, an immigration attorney with the nonprofit Alabama Appleseed legal center in Montgomery, said she had been hearing that some people wanted to wait until after the 11th Circuit considers the case in March.

State agriculture officials who say the new law led to a chronic shortage in agricultural labor said they havent seen evidence of large numbers of immigrants returning to the state. Many immigrants worked in the states poultry processing plants or out in tomato fields, planting and harvesting crops.

Gwen Ferreti, a researcher and activist in the Hispanic community, said some immigrants remain wary but are coming back because of their deep ties to the state.

Some initially feared the law would mean that people would be rounded up, or that youd be stopped just for being Hispanic, said Ferreti, an anthropologist from the University of Texas who is living in Tuscaloosa, about 60 miles southwest of Birmingham, for her studies. That has not happened, but people are aware that racial profiling is going on if you are Hispanic. They are still uneasy.