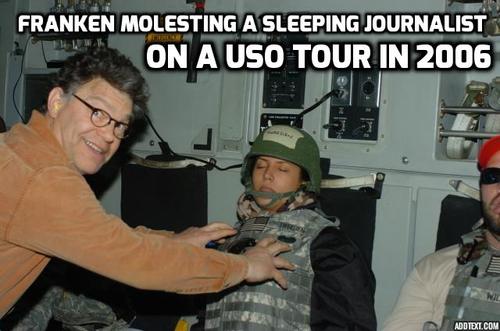 Apropos of James Kirkpatrick’s piece on Al Franken, take note that molesting sleeping women or fondling buttocks aren't his only obvious problem. He’s a rage-a-holic and potentially violent maniac, as we know from his tackling a protester at a campaign event in 2004 for Howard Dean, then governor of New Hampshire. Bottom line: Don’t disagree with Al, or else.

The latest on the Minnesota Funnyman comes from Melanie Morgan, who appeared with Franken on “Politically Incorrect” on Aug. 19, 2000, as Media Equalizer retells the story. After an arcane dispute over the federal budget, Franken became enraged, angrily confronted Morgan backstage, then stalked Morgan for days by telephone. She was justifiably terrified.

She was joined by Franken, William Baldwin, and then-Colorado Lt. Governor Joe Rogers on the panel.

Morgan and Franken had a dispute over the OMB’s budget numbers.

“I was invited and unaware of who his guests were going to be that night,” Morgan said.

“I made a statement about the budget numbers, Franken challenged me, I challenged him back.

It was about spending priorities, actually just a mundane discussion. But he obsessed over it.”

After the show, Morgan said Franken wouldn’t leave her alone, insisting on continuing the argument.

“He approached me backstage, angrily called me out on those numbers and insisted he would prove he was right. He wouldn’t leave me alone, he kept following me. As a woman, his presence and proximity to me felt very threatening and intimidating.

“I didn’t realize his creepy behavior after the show meant it would continue in the days to come.

“He approached Carol, the show’s producer and demanded my home phone number, which was a clear violation of network protocol. I had thought that was the end of the story and was shocked when he started calling my home, badgering me repeatedly.

“I became fearful and called Carol to complain and asked her to tell him to back off. But he made another call after that. I thought that he might end up stalking me at my home in Northern California, it was that bad.

“By the third phone call I was outraged and terrified, as he is really disturbed,” Morgan recounted.

Morgan said Franken finally left her alone, but only after she pushed back and threatened “to call the police and make a report that he was harassing me.”

To this day, she says she is haunted by it: “I never forgot that experience and it informed me of his lack of character and obsessive personality. I believe every word Leann wrote.”

Sen. Al pulled the same stunt after a debate with GOP Sen. Norm Coleman, confronting Coleman so angrily that Franken’s wife had to intervene.

Too bad she wasn’t there to get between the Senate giant and Leeann Tweeden.

Of course, Franken’s hoped-for departure won’t just get rid of a reliable leftist voice in the Senate. It also rids us of a vigorous promoter of refugee and immigrants—.e.,  a Treason Lobbyist who wants to alter the ethnic balance of the nation, long term, which is no small thing even short term, given the many “Minnesota men” involved in crime and terrorism, but whom Franken wants to enter the country.