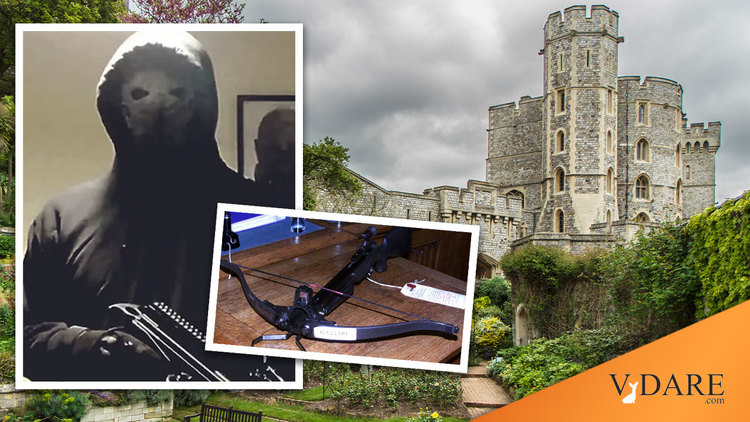 Britain’s Home Office said it was “considering options to strengthen controls” on the weapons, part of a continuing review, after a man was arrested in castle grounds with one.

LONDON — Regulations governing crossbows in Britain are receiving renewed attention after a man was apprehended with one on the grounds of Windsor Castle, where members of the royal family had gathered for the Christmas holiday.

“We are considering options to strengthen controls on crossbows,” a spokesman for Britain’s Home Office said in a statement Tuesday, as part of a continuing review of rules on lethal weapons ordered this year by Priti Patel, the home secretary.

The renewed scrutiny comes days after an intruder breached the castle grounds on Christmas morning. A 19-year-old man was arrested “on suspicion of breach or trespass of a protected site and possession of an offensive weapon,” according to the police, while Queen Elizabeth II was on the premises with other members of the royal family.

The man arrested, whom the police declined to identify, did not enter any buildings or endanger the royal family. But police officers said they found a crossbow after searching him, adding that he was in the care of medical professionals receiving treatment for mental health issues.

Under existing legislation, crossbows can be purchased over the counter or on the internet by those over the age of 18. Owners do not need a license or certificate to operate the weapons and, unlike shotguns and firearms, the police do not have an official record of who owns them and how many are in circulation. …

The Home Office said work reviewing the legislation was continuing after the episode in East Yorkshire, adding that it was already an offense to possess arrows, or possess offensive weapons in public spaces “without good reason or lawful authority.”

The New York Times is stumped by the police not revealing the name of the would-be Crossbow Assassin, but the more resourceful Daily Mail is not:

Awkwardly smiling for the camera, this is the teenager suspected of attempting to assassinate the Queen with a crossbow on Christmas Day.

The photos, which appear to show a studious and friendly young man, are in stark contrast with the chilling video Jaswant Singh Chail is believed to have sent to friends minutes before his arrest after he scaled a fence at Windsor Castle.

… And Chail’s father, Jasbir Singh Chail, 57, a software engineer who runs an IT company from the family’s £500,000 four-bed home on a private estate in the village of North Baddesley, Hampshire, yesterday told MailOnline something had gone ‘horribly wrong’ with his son. …

In the video footage, the masked and hooded 19-year-old aims a black crossbow at the camera as he pledges to kill the monarch in revenge for the 1919 Amritsar, or Jallianwala Bagh, massacre, when British troops killed hundreds of Indian protesters.

In an artificially deep voice that he has digitally distorted, Chail says: ‘If you have received this then my death is near.’

He adds: ‘I’m sorry. I’m sorry for what I’ve done and what I will do. I will attempt to assassinate Elizabeth, Queen of the Royal Family.

Doctors and detectives are now examining the bizarre footage in which Chail apparently makes various references to villains from the Star Wars film series.

‘I’m an Indian Sikh, a Sith. My name was Jaswant Singh Chail, my name is Darth Jones,’ he says in the video. This is understood to be a reference to the enemies of the Jedi knights, who use the dark side of the force for evil.