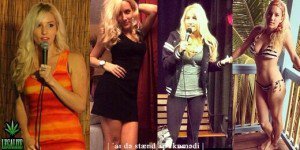 My mom and I were on FB discussing how awful Ann Coulter is and my conservative great-aunt commented "Are you haters?" then my head exploded
— Adrienne Airhart (@craydrienne) May 12, 2014

Because it simply hadn't  occurred to her, while she and her mom are hating Ann Coulter, that she's being hateful.

Coulter has been living with this since the 90s. [The Moral Fallout of Clintonism, by Noemie Emery, Heterodoxy, October 1999]

Coulter has been accused of misusing her tall, blond good looks in the cause of conservatism.

Vanity Fair's James Wolcott referred to  "the 'Basic Instinct' ride of her miniskirts and 'Fatal Attraction' stare" which is offensive, and said she was "no longer enticing viewers" which is just wrong.

(I'm sure Ann Coulter is not deliberately wearing short skirts, it's just that when you're six feet tall and a size six, skirts look short on you.) Is Adrienne Airhart likely to be called a telebimbo by Katie Couric as Coulter was? No!

But not because Adrienne Airhart is secretly a Cornell graduate and member of the New York Bar. She actually is a telebimbo. But she's not hated by haters, like Coulter is.