Obama’s long-promised post-election amnesty is shaping up at a yet-undetermined print shop capable of producing 34 million work permits and green cards over the next five years. Jessica Vaughan from CIS opined that the program would have a “sketchy funding arrangement” which could be a way for Congress to challenge it.

Naturally, the scheme is all about importing a new people, one more inclined to big government and the Democrat view of governance. 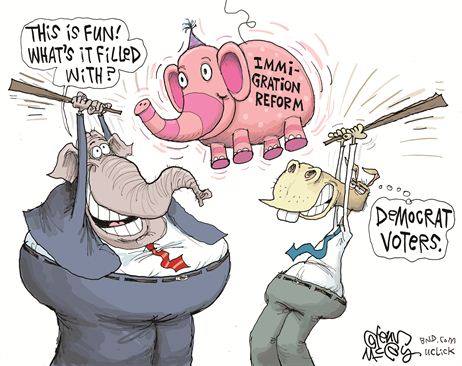 Rush Limbaugh devoted some radio time to the amnesty issue on Monday, which is always welcome after long periods of snooziness about the greatest threat to America.

RUSH: From Breitbart: “Despite no official action from the president ahead of the election, the Obama administration has quietly begun preparing to issue millions of work authorization permits, suggesting the implementation of a large-scale executive amnesty may have already begun.”

Now, this is not a surprise. You’ve all known this was coming. It was gonna happen before Labor Day, but Obama couldn’t find a way to pin it on the Republicans. Luis Gutierrez, congressman from Chicago, he was running around all excited, he’d already set the system up to help people adjust to it after if it happened. He was predicting it. It was imminent. It was gonna happen. And then when it didn’t happen Labor Day, well, you know, it’ll happen right before the election. No, no, no, it won’t. It’s not gonna happen before. Now it’s gonna happen after the election.

Now what we know is, it’s not gonna happen until every Senate election has been decided, including Mary Landrieu, Louisiana, that goes to run off. Obama’s not gonna do anything here, because nobody’s gonna get any credit for this. This is not a positive. This is nothing a majority of the American people support. This is pure governing against the will of the people. I just gave you the story in the New York Times about this poor woman who’s discovering she can’t afford even health maintenance after signing up for Obamacare. She can’t even afford a brain scan ’cause her deductible is now six grand. So everything before that she has to pay, come out of her pocket.

She thought her premiums are gonna go down. That didn’t happen, either, but the employer mandate doesn’t kick in ’til after the election. There’s all kinds of new horror stories in a lot of areas that are going to become reality after the election. And one of them is amnesty.

This story here: “Despite no official action from the president ahead of the election, the Obama administration has quietly begun preparing to issue millions of work authorization permits, suggesting the implementation of a large-scale executive amnesty may have already begun. Unnoticed until now, a draft solicitation for bids issued by US Citizenship and Immigration Services (USCIS) Oct. 6 says potential vendors must be capable of handling a ’surge’ scenario of 9 million id cards in one year ‘to support possible future immigration reform initiative requirements.’

“The request for proposals says the agency will need a minimum of four million cards per year. In the ’surge,’ scenario in 2016, the agency would need an additional five million cards — more than double the baseline annual amount for a total of 9 million. … It’s not unheard of for federal agencies to plan for contingencies, but the request specifically explains that the surge is related to potential changes in immigration policy.”

Now, what it all means is that we’re getting ready to pass out work IDs to nine million people. That’s what the memo is telling involved agencies to be prepared for. “The Contractor shall demonstrate the capability to support potential ’surge’ in PRC and EAD card demand for up to 9M cards during the initial period of performance to support possible future immigration reform initiative requirements.” This is in the document, and all it means is amnesty is coming.

Meanwhile, also from Breitbart: “Deportations from the interior of the United States declined 34 percent this year from last, according to a new report from the Center for Immigration Studies, derived largely from an internal Department of Homeland Security document. The CIS report released Wednesday and authored by the group’s director of policy studies, Jessica Vaughan, details the decline in immigration enforcement and reveals that there remain nearly 167,000 convicted criminal immigrants with final orders of removal still in the United States and ‘currently at large.’”

“Unnoticed until now, a draft solicitation for bids issued by US Citizenship and Immigration Services (USCIS) Oct. 6 says potential vendors must be capable of handling a ’surge’ scenario of 9 million id cards in one year ‘to support possible future immigration reform initiative requirements.’” Clearly unconstitutional. But this is it. This is the executive amnesty.

Mr. Snerdley’s in there smiling and nodding his head because we’ve seen this before. I take you back to June 23rd of this year. Let me read to you excerpts from our Morning Update, a commentary that runs on EIB affiliates every morning.

“Six months ago, the Regime began planning how to transport tens of thousands of undocumented children from the border. A January 29th application was posted on Federal Business Opportunities, a website that advertises government contract openings. The post says the government was preparing for the arrival of undocumented kids, and they sought vendors to handle transportation logistics.”

Transportation vendors to handle transportation logistics. January. Remember the surge of kids. We became aware of it in March or April. It turns out there were tens of thousands of them from Central America, and nobody knew why. Why now? What’s behind this? A 45-day trip on a train. Their parents staying at home in Guatemala, El Salvador, Nicaragua. They would get here, they’d be processed quickly and then dispatched to, quote, unquote, family members all over the country.

Nobody knew where they went. Nobody knew how many, really, except we found that the government was advertising for the transportation logistics services all the way back on January 29th. They knew January 29th what was coming and were preparing to hire private contractors to handle dispersing these arriving kids.

Well, here we go, the same thing’s happening now. These agencies are now being told, get ready for nine million illegals, work IDs, get ready for nine million of ‘em to start. This is the equivalent of that January 29th jobs posting memo on the federal website, what’s been uncovered here. So whereas we had a jobs posting memo hit on January 29th advertising for local transportation companies, buses, cars, you name it. We’re gonna have a bunch of kids that we gotta scatter all over the country, we’re gonna hire you, submit your bid on this website.

What’s happening now is contractors who want to apply for low wage labor applicants, are being told get ready because we’re gonna have nine million new arrivals. So who knew? We all knew. None of this is a surprise. Some people, I think, thought the longer it went on without Obama actually doing it, there might be an outside chance he wouldn’t do it. That he wouldn’t pull the trigger. He’s always intended to pull the trigger.

He was always gonna pull the trigger. If he could have found a way for this to be blamed on the Republicans, he would have pulled the trigger by now. He was unable to. But he’s committed to this. And you know the reason. You know the why. You know why this is being done. And, by the way, this has some relationship to the way they’re trying to smear me again on CNN regarding Ebola.