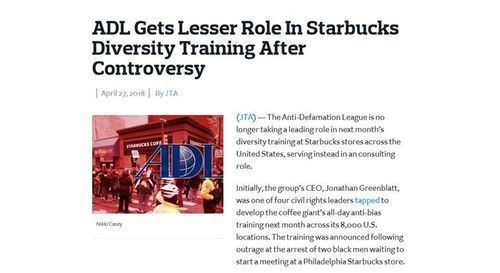 ADL Gets Lesser Role In Starbucks Diversity Training After Controversy
April 27, 2018 By JTA

(JTA) — The Anti-Defamation League is no longer taking a leading role in next month’s diversity training at Starbucks stores across the United States, serving instead in an consulting role.

Initially, the group’s CEO, Jonathan Greenblatt, was one of four civil rights leaders tapped to develop the coffee giant’s all-day anti-bias training next month across its 8,000 U.S. locations. The training was announced following outrage at the arrest of two black men waiting to start a meeting at a Philadelphia Starbucks store.

The other three civil rights leaders — Sherrilyn Ifill of the NAACP’s Legal Defense Fund, Bryan Stevenson of the Equal Justice Initiative and Heather McGhee off the liberal think tank Demos — will still be leading the training. 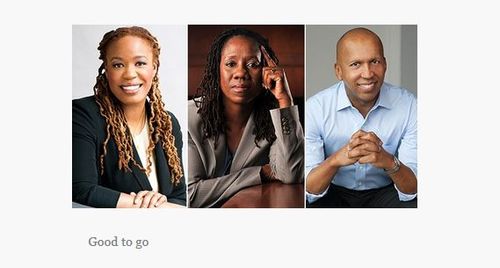 But Starbucks announced in a Wednesday press release that the ADL will now be one of “a diverse array of organizations and civil rights experts” that Starbucks will consult. Other groups in the consulting role include those combating anti-Muslim, anti-LGBT and anti-Latino bigotry. 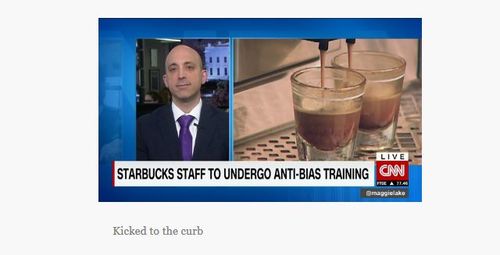 Starbucks did not specify why Greenblatt is no longer among the originally named experts.

This is just a crazy thought, but maybe it has something to do with Greenblatt not being black?

Greenblatt’s original role was criticized by left wing activists — and they claimed victory.

“The demotion of the ADL from a leadership role is a clear reflection of the recognition by a wide variety of social justice organizations and individuals that the ADL’s status as a civil rights organization is compromised given its history and practices of anti-Muslim, anti-Palestinian, and anti-Black racism,” Rebecca Vilkomerson, JVP’s executive director, said in the press release.

Here’s a leaked copy of the speech Greenblatt was planning to deliver to all Starbucks workers:

I say to you today, my friends, so even though we face the difficulties of today and tomorrow, I still have a dream. It is a dream deeply rooted in the American dream. I have a dream that one day this nation will rise up and live out the true meaning of its creed, “We hold these truths to be self-evident, that all men are created equal.” I have a dream that one day, Jewish-Americans will be free — free at last, free at last, Thank God Almighty, we are free at last — to sit down at a Starbucks lunch counter and order an Iced Skinny Cinnamon Dolce Latte.