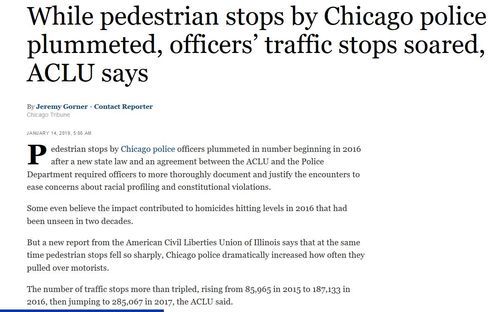 The total number of homicides in Chicago shot upwards from 512 in 2015 to 808 in 2016, following progressives at the ACLU and Obama Administrations taking effective control of the Chicago Police Department after the city finally released video of a cop shooting a black male on 11/23/2015.

Now, you might think that the ACLU would be a little embarrassed about those 296 incremental dead bodies in one city in one year. But instead the ACLU is back with a new report about how the cops in Chicago still aren’t spending enough time in the donut shop. From the Chicago Tribune:

Pedestrian stops by Chicago police officers plummeted in number beginning in 2016 after a new state law and an agreement between the ACLU and the Police Department required officers to more thoroughly document and justify the encounters to ease concerns about racial profiling and constitutional violations.

Some even believe the impact contributed to homicides hitting levels in 2016 that had been unseen in two decades.

How about: “Homicides in Chicago rocketed upwards almost immediately. Ultimately, 58% more human beings were murdered in Chicago in 2016 than in 2015.”

But a new report from the American Civil Liberties Union of Illinois says that at the same time pedestrian stops fell so sharply, Chicago police dramatically increased how often they pulled over motorists.

The findings have raised alarms for civil libertarians at a time when the Police Department is attempting to improve trust with minority communities as it nears a federal court agreement meant to ensure widespread reforms are carried out. …

Multiple Chicago police officers who talked to the Tribune on the condition of anonymity because they were not authorized to speak publicly said they believe many officers now prefer to pull drivers over rather than stop pedestrians. The documentation they must fill out for traffic stops is much simpler than the lengthy, detailed reports required for pedestrian stops as a result of the department’s agreement with the ACLU, they said. …

The high number of traffic stops came at the same time that officers sharply dropped how often they stopped pedestrians. Those street stops plummeted to just over 107,000 for both 2016 and 2017, down from about 600,000 in 2015, official Police Department statistics show. …

Chicago ended 2016 with more than 4,300 people shot and in excess of 760 killed, the worst violence the city had seen in two decades. In interviews that year with the Tribune, some officers blamed the changes in the pedestrian stops in part for the rise in violence, saying they prevented cops from policing the streets more aggressively.

But crime experts have dismissed that explanation for the spike in violence, while the ACLU has contended that the drastic drop in pedestrian stops likely indicates that the closer review is succeeding in officers making fewer unconstitutional stops.

So, if you read this very lengthy article carefully and critically, it’s clear that the “crime experts” are lying and the ACLU and Obama Administration have a lot of blood on their hands.

But who reads carefully?

Is there any accountability for progressives?