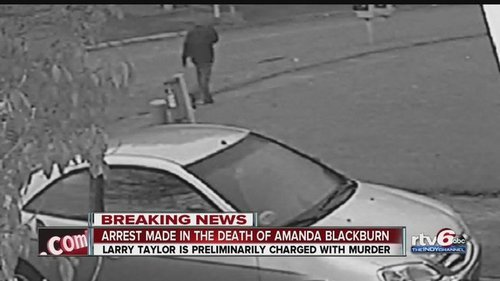 Accused In Amanda Blackburn Rape-Murder: ONE Fast Fact You Need To Know—He's Black

Heavy.com's trademark "5 Fast Facts You Need to Know" about breaking crime stories rarely includes race, except in photographic form. This story doesn't have a photo:

Larry Jo Taylor Jr., 18, was arrested November 23 and is being held on a preliminary charge of murder in the death of 28-year-old Amanda Blackburn, according to Indianapolis police.

Blackburn, who was 12 weeks pregnant, was found unconscious in her Indianapolis home on November 10 by her husband, Resonate Church Pastor Davey Blackburn. Their 1-year-old son was sleeping upstairs. Amanda Blackburn was taken to the hospital, but died two days later.

Two other suspects, Jalen Watson and Diano Gordan, are also in custody, but have not yet been charged, Fox 59 reports.

Watson is expected to be charged with felony murder, WISH-TV reports.

Police said a booking photo of Taylor was not immediately available.

However, under Fact 1: Taylor Is Accused of Raping & Shooting Blackburn While the Other Suspects Went to an ATM is this graphic—click to enlarge:

And that includes the booking description:

Because for the police, who have to find criminals, and the jails, who have to keep track of them, race is always one fast fact you need to know.

I haven't seen pictures of Jalen Watson and Diano Gordan. I'm just going to assume that people named Jalen and Diano who were part of something called "The Kill Gang" with Larry Taylor (male, black, 5' 8", 145) are also black males.