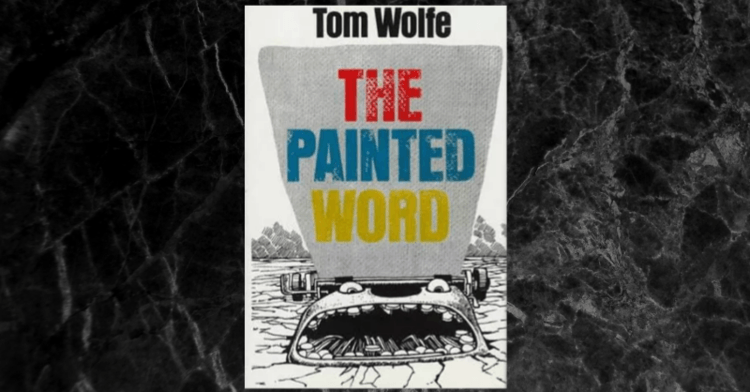 Abstract Expressionism and the CIA

Here's Mark Tansey's ten-foot wide 1984 neo-conceptualist painting The Triumph of the New York School, which is roughly modeled on Velasquez's Surrender of Breda. It hangs in New York's Whitney Museum. 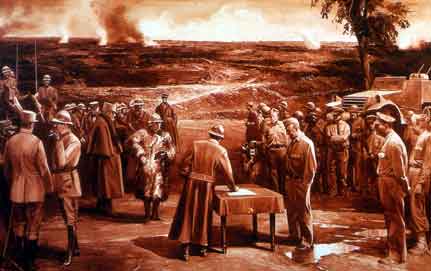 The general of the victorious American forces, with his hands in his pockets, is critic Clement Greenberg, the chief expounder of Jackson Pollock's drip paintings. The second most dominant American figure is the MacArthuresque general on the right, critic Harold Rosenberg. In agreement with Tom Wolfe's 1975 book, The Painted Word, the actual American painters, such as Pollock, Willem de Kooning, and Mark Rothko, are depicted as adjutants in the background behind their critical leadership.

The actual paintings themselves are a matter of personal taste, but there's no disputing the triumph of American art during the early Cold War years over stodgy Moscow-approved socialist realism as fashion.

After WWII, the U.S. government attempted to win European intellectuals away from the Communist Party by sponsoring avant-garde art, such as the New York School of abstract expressionist painting. But, American politicians, such as President Truman, objected to the taxpayers dollars being wasted on ugly stuff that their kids could do.

So, funding moved to the black budget of the CIA.

Frances Stonor Saunders' 1995 article in The Independent, Modern art was CIA 'weapon,' revealed some details of CIA sponsorship of the New York School. Her method of research was basically to call up old CIA men (or their kids) and get them talking about their triumphs during the good old days. This is not a particularly reliable method (it invites old-timers to exaggerate their importance), but it's certainly better than nothing.

Until now there has been no first-hand evidence to prove that this connection was made, but for the first time a former case officer, Donald Jameson, has broken the silence. Yes, he says, the agency saw Abstract Expressionism as an opportunity, and yes, it ran with it.

"Regarding Abstract Expressionism, I'd love to be able to say that the CIA invented it just to see what happens in New York and downtown SoHo tomorrow!" he joked. "But I think that what we did really was to recognise the difference. It was recognised that Abstract Expressionism was the kind of art that made Socialist Realism look even more stylised and more rigid and confined than it was. And that relationship was exploited in some of the exhibitions. ...

To pursue its underground interest in America's lefty avant-garde, the CIA had to be sure its patronage could not be discovered. "Matters of this sort could only have been done at two or three removes," Mr Jameson explained, "so that there wouldn't be any question of having to clear Jackson Pollock, for example, or do anything that would involve these people in the organisation. And it couldn't have been any closer, because most of them were people who had very little respect for the government, in particular, and certainly none for the CIA. If you had to use people who considered themselves one way or another to be closer to Moscow than to Washington, well, so much the better perhaps."

This was the "long leash". The centrepiece of the CIA campaign became the Congress for Cultural Freedom, a vast jamboree of intellectuals, writers, historians, poets, and artists which was set up with CIA funds in 1950 and run by a CIA agent. It was the beach-head from which culture could be defended against the attacks of Moscow and its "fellow travellers" in the West. At its height, it had offices in 35 countries and published more than two dozen magazines, including Encounter [edited by English ex-Communist poet Stephen Spender].

The Congress for Cultural Freedom also gave the CIA the ideal front to promote its covert interest in Abstract Expressionism. It would be the official sponsor of touring exhibitions; its magazines would provide useful platforms for critics favourable to the new American painting; and no one, the artists included, would be any the wiser.

This organisation put together several exhibitions of Abstract Expressionism during the 1950s. One of the most significant, "The New American Painting", visited every big European city in 1958-59. Other influential shows included "Modern Art in the United States" (1955) and "Masterpieces of the Twentieth Century" (1952).

Because Abstract Expressionism was expensive to move around and exhibit, millionaires and museums were called into play. Preeminent among these was Nelson Rockefeller, whose mother had co-founded the Museum of Modern Art in New York. As president of what he called "Mummy's museum", Rockefeller was one of the biggest backers of Abstract Expressionism (which he called "free enterprise painting"). His museum was contracted to the Congress for Cultural Freedom to organise and curate most of its important art shows.

The museum was also linked to the CIA by several other bridges. William Paley, the president of CBS broadcasting and a founding father of the CIA, sat on the members' board of the museum's International Programme. John Hay Whitney, who had served in the agency's wartime predecessor, the OSS, was its chairman. And Tom Braden, first chief of the CIA's International Organisations Division, was executive secretary of the museum in 1949.

Now in his eighties, Mr Braden lives in Woodbridge, Virginia, in a house packed with Abstract Expressionist works and guarded by enormous Alsatians. He explained the purpose of the IOD.

"We wanted to unite all the people who were writers, who were musicians, who were artists, to demonstrate that the West and the United States was devoted to freedom of expression and to intellectual achievement, without any rigid barriers as to what you must write, and what you must say, and what you must do, and what you must paint, which was what was going on in the Soviet Union. I think it was the most important division that the agency had, and I think that it played an enormous role in the Cold War."

He confirmed that his division had acted secretly because of the public hostility to the avant-garde: "It was very difficult to get Congress to go along with some of the things we wanted to do - send art abroad, send symphonies abroad, publish magazines abroad. That's one of the reasons it had to be done covertly. It had to be a secret. In order to encourage openness we had to be secret."

If this meant playing pope to this century's Michelangelos, well, all the better: "It takes a pope or somebody with a lot of money to recognise art and to support it," Mr Braden said. "And after many centuries people say, 'Oh look! the Sistine Chapel, the most beautiful creation on Earth!' It's a problem that civilisation has faced ever since the first artist and the first millionaire or pope who supported him. And yet if it hadn't been for the multi-millionaires or the popes, we wouldn't have had the art."

But look where this art ended up: in the marble halls of banks, in airports, in city halls, boardrooms and great galleries. For the Cold Warriors who promoted them, these paintings were a logo, a signature for their culture and system which they wanted to display everywhere that counted. They succeeded.

Basically, this was the kind of painting that the American ruling class, circa 1945-1964, liked.

Their wives in Darien found it fashionable and their cousins bought it for the lobbies of their corporate headquarters. It was a new sort of imperial art for a new sort of empire. Rather than an in-your-face colossal statue of Emperor Ozymandias, this imperial art was depersonalized (an asset in the global twilight struggle for the allegiance of peoples who all looked different), cool, enigmatic. Rather than overpower the spectator, it undermined the viewer's self-confidence (as in Norman Rockwell's genial The Connoisseur): 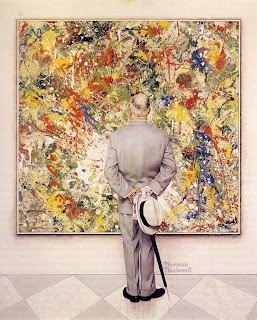 Somebody with a lot of money and power caused this enormous canvas of drips to be displayed here. But why? What do they know that I don't know? If they can pull this off, what else can they do? What can't they do? They look like they are going to win, so wouldn't it be smarter for me just to go along with them?

Abstract expressionism was a sort of objective correlative for the CIA.