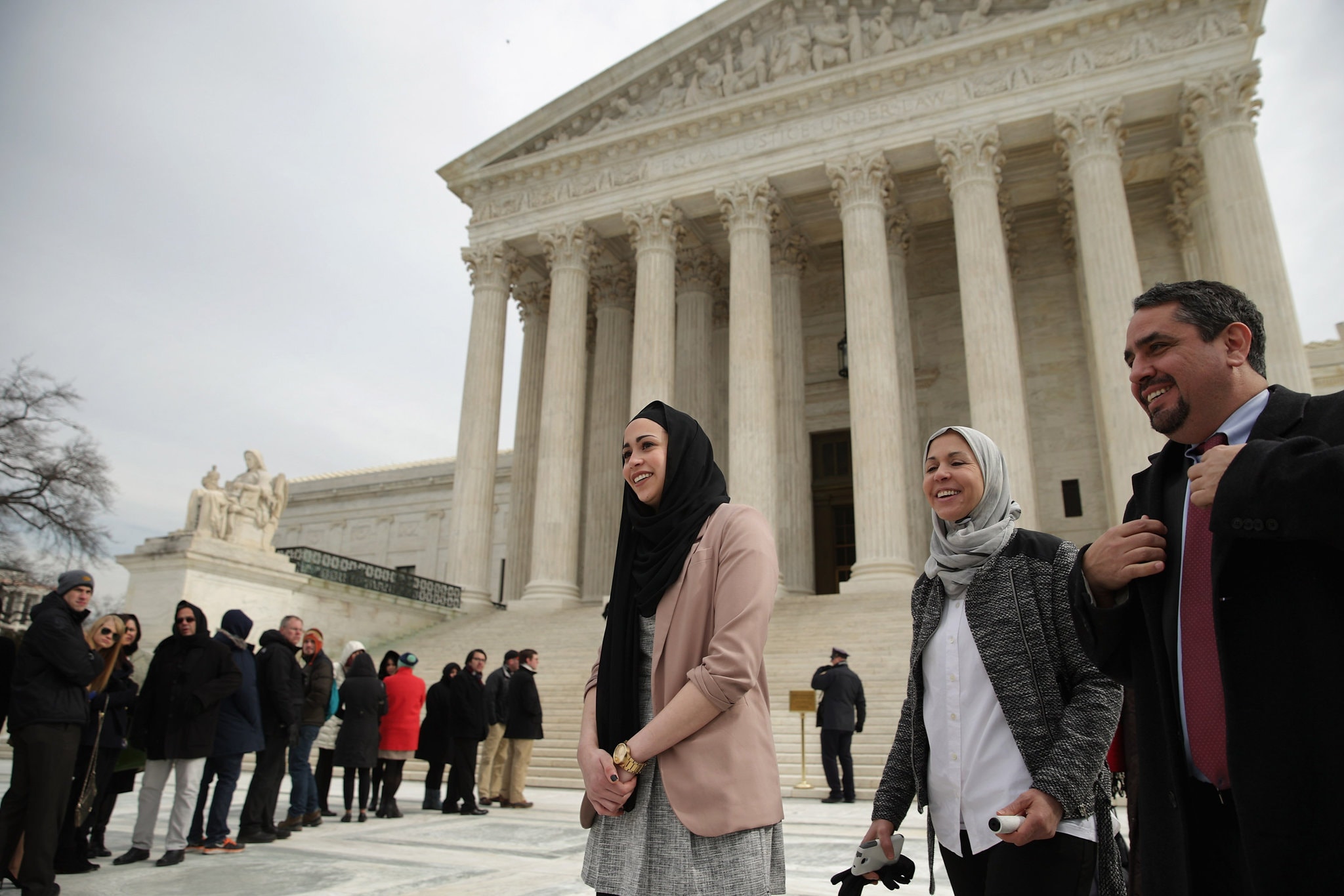 The complainer and her mom, in hijabs. Also, David Lopez, general counsel for the Equal Employment, paid for with your tax dollars.

In a Case of Religious Dress, Justices Explore the Obligations of Employers

… Samantha Elauf, then 17, sought a job in a children’s clothing store owned by Abercrombie & Fitch. She wore a black head scarf but did not say why.

The company declined to hire her, saying her scarf clashed with the company’s dress code, which called for a “classic East Coast collegiate style.” The desired look, Justice Alito said, was that of “the mythical preppy.”

Ms. Elauf recalled the experience in a statement issued after the argument. …

“Then I learned I was not hired by Abercrombie because I wear a head scarf, which is a symbol of modesty in my Muslim faith,” she added. “This was shocking to me.”

It would have been great if Scalia had banged his gavel and summarily declared Abercrombie & Fitch guilty by Reason of Pederasty. From a New York profile of Mike Jeffries, boss of Abercrombie until very recently:

Above all, Jeffries, who was once married but is now openly gay, sought to sell an image of American beefcake sexuality as he saw it: a world of hairless, amply muscled men tussling in a pastoral Eden. That this world was so highly homoeroticized—the roughhousing in the catalogues seemed perpetually on the point of turning into a full-on orgy—is one of the most poignant ironies of his success. He was persuading straight jock teenagers to buy into a gay man’s fantasy of a jock utopia.

“Poignant” isn’t the word I would use.

Back to the Supreme Court:

Her experience with Abercrombie made her feel “disrespected because of my religious beliefs,” she said. “I was born in the United States and I thought I was the same as everyone else.”

I feel disrespected just walking past an Abercrombie store at the mall because I don’t share the sexual orientation of Ernst Röhm.

Fortunately, Justices Kagan and Ginsburg were there to worry about whether Jews would be discriminated against in the fashion retailing industry:

“Suppose,” Justice Kagan asked, “an employer just doesn’t want to hire any Jews, and somebody walks in and his name is Mel Goldberg, and he looks kind of Jewish and the employer doesn’t know he’s Jewish. No absolute certainty, and certainly Mr. Goldberg doesn’t say anything about being Jewish, but the employer just operates on an assumption that he’s Jewish, so no, he doesn’t get the job. Is that a violation?”

Mr. Dvoretzky said that was classic employment discrimination based on religion. But Abercrombie’s dress code was different, he said. It applied neutrally in banning all head coverings.

When I was at UCLA’s MBA school in the early 1980s, a retailing professor had to warn female gentile students that they’d never get promoted beyond Buyer at any of Los Angeles’s major department store chains. Funny how you never hear that kind of history of discrimination mentioned. Of course, we don’t even have a word for it, so it’s hard to remember.