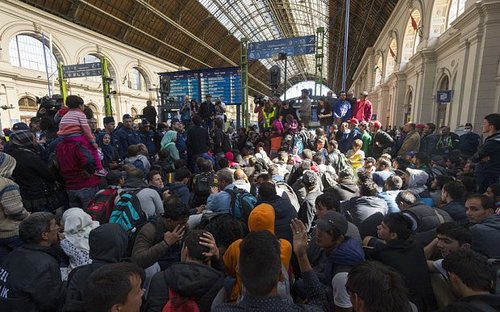 Merkel broke, suspended the Schengen Agreement, and is sending all available German police officers to seal the southern border. All trains have been stopped at the border. They're supposedly going to be very strict and only admit those with valid travel documents now.

There are also rumblings that Germany will enforce the Dublin protocol that requires refugees to register for asylum in the first EU country they enter, instead of illegally traveling hundreds of miles and passing through multiple safe EU countries to go for that German jackpot. I'll believe that when I see Viktor Orbán wrapped in a rainbow flag, handing out flowers and caviar at the border.

Merkel's open borders promise lasted one week. I believe she was on the verge of being involuntarily removed from office by the sane German politicos, if she didn't back down.

This is huge. It could be the end of Europe's immigration mania, and the EU itself. I hope for the love of God that it will be.

N.S.: While the MSM is still promoting the Merkel-as-the Moslem-grifter-and-terrorist’s-best-friend talking point, so far, England’s Telegraph alone is reporting the new situation:see the liveblogging at the Telegraph.