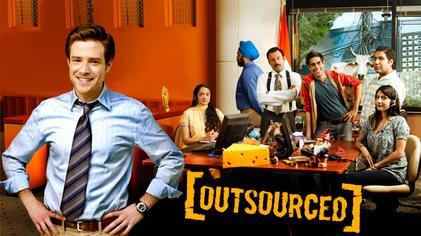 A Laughtrack for America's Decline

Stumbling through satellite channels the other night with Mrs. Anonymous Attorney, I found Outsourced, an NBC sitcom about a white American sent to Mumbai to oversee a call center for a Midwestern toy company.

The theory I developed a few seconds in: it's designed to cute-ify American job loss.

By the show's end, my theory was more or less confirmed. It's got a few funny cracks, but the basic idea is that we should all see the warmth, humanity and humor in the offshoring of American jobs, includng comical culture clashes between India and America and the striving and clever nature of Indians. Be patient with them on the phone, all you Archie Bunkers.

I had to chuckle at thoughts the show was "racist" — the only question for me was how "racist" it was against whites (which was "not any more than usual"). The writers offset ribbing of white American foibles with ribbing of Indian foibles, so nobody can be accused of taking sides. (Think of the portrayal of Apu on The Simpsons: yes, he's working at the Kwik-E-Mart, but he's really a striving, bright immigrant.)

And really, as immigrants go, Indians do compare favorably with Hispanics or other groups — and as takers of our jobs, they're a little hipper and more appealing than the Chinese. Therein lies another trick: present this cheerful group as the face of globalization and outsourcing, and it starts to look pretty harmless.

Thought: how would TV writers feel about their jobs being outsourced?