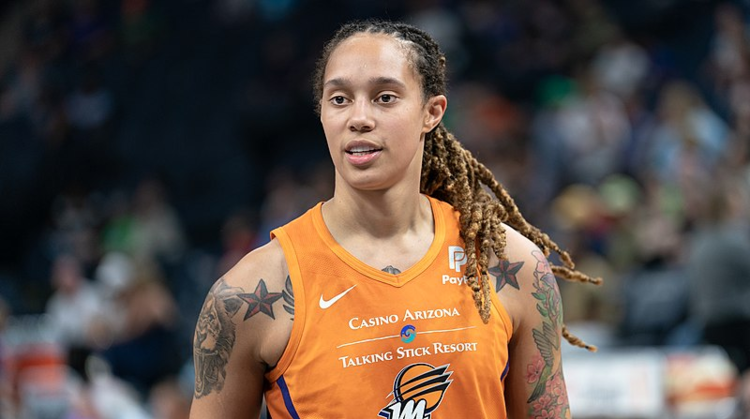 A Celebrity Who Probably Really Does Feel Like the Opposite Sex on the Inside: WNBA's 6'-8" Brittney Griner

Part of the NYT’s campaign gearing up to wage World War T as a successor to the World War G over gay marriage was a series of articles about babies born with birth defects that make their sex ambiguous to the doctor doing the delivery. This is a very rare but real medical syndrome. Not surprisingly, therefore, a few people grow up feeling very different on the inside than the sex marked on their birth certificates.

This PR offensive prepared the ground for the now conventional wisdom of viewers of Keeping Up with the Kardashians that guys like Bruce Jenner, Donald McCloskey, Larry Wachowski, and my old Marketing Strategy class teammate Martin Rothblatt (now the “highest paid female CEO” in America) were always really girls on the inside.

Now you know and I know that for these celebrities this is largely self-serving BS. At UCLA B-School, for instance, Rothblatt contended with an Israeli fighter pilot for the title of most arrogant man.

Most of the high profile m-to-f transgenders in the news have very different motivations than the ones you are allowed to assert in polite society. For example, there is the sex fetish of autogynephilia. Here’s a book on the subject:

There may well be other motivations, including mental issues. People struggling with depression or paranoia, for example, routinely retcon their past. They often really do feel like they’ve always been depressed or have always been persecuted by the grocery store clerks union.

On the other hand, there are a few celebrities who likely really are the victim of birth defects, typically highly masculine athletes without external male genitalia. But, the media seldom portray them as transgenders deserving of our sympathy for their unfortunate medical condition, but as Strong Women Shattering Sexist Stereotypes.

For example, at the 2012 Summer Olympics, South Africa entered in the Women’s 800m running race a youth named Caster Semenya, who is built like an LSU cornerback, except for not having descended testicles. Growing up, Semenya always hung out with guys, played sports, developed crushes on girls, and just seemed to be a regular guy, except for South Africa insisting Semenya is a world-class female athlete.

South Africa played the race card to override complaints by real women athletes about having to compete against Semenya. South Africa’s racial propaganda stymied the International Olympic Committee from performing a sex test on Semenya.

A dominant athlete who skipped the 2012 Olympics and the threat of a sex test was the world’s dominant “female” basketball player: slam-dunking, baritone-voice, bowtie-wearing, 6’8? Brittney Grier of Baylor, now of the WNBA.

Here, from the Vows wedding news column in the New York Times, is a good example of how the NYT often lets its reporters dog whistle what’s really going on for the benefit of individuals with very good reading comprehension skills without ever quite coming out and saying it and horrifying the naive subscriber base:

For Brittney Griner and Glory Johnson, a Complicated Match Made on the Hardwood MAY 11, 2015

These days, even in conservative Arizona, same-sex weddings are a dime a dozen. But this one was different.

This was a marriage between a gay woman and a straight woman.

This was a wedding that two weeks earlier many weren’t sure was going to happen.

The courtship and wedding plans of Brittney Griner and Glory Johnson, marquee players in the Women’s National Basketball Association, have been complicated.

Ms. Griner and Ms. Johnson, each 24 years old, have also been entertaining and largely public, including their active presence on Twitter and Instagram, their January appearance on the TLC show “Say Yes to the Dress: Atlanta,” and the mug shots that accompanied articles about their April 22 arrests on domestic violence charges after a fight at their new home west of Phoenix.

Ms. Griner, the 6-foot-8 center for the Phoenix Mercury, is one of the most decorated female college basketball players in history. She is the league’s top shot blocker and averaged 15.6 points last season, leading the Mercury to their third W.N.B.A. championship. Ms. Johnson, a 6-foot-3 forward for the Tulsa Shock, is a two-time W.N.B.A. All-Star and the league’s third-ranked rebounder, averaging 14.7 points last season.

… “Plus, Glory is straight,” Ms. Griner said. “That was another reason why I thought this could end really bad.”

Ms. Griner was in pursuit.

Ms. Johnson said she wasn’t sure what was happening, but that was O.K. She was not attracted to women, but she realized she was attracted to Ms. Griner.

“I’m not a lesbian,” Ms. Johnson said. “But Brittney is different.”

… Ms. Griner publicly came out as gay shortly after she was selected by the Mercury as the No. 1 draft pick in April 2013, though her sexuality had not been a secret and it generated little notice in her new hometown Phoenix. The city embraced Ms. Griner, a lanky Houston native with a deep voice, huge hands (a bigger grip than LeBron James) and size 17 shoes. She wowed fans with two dunks in her first pro game.

… “It was weird, but it was so comfortable it didn’t feel like it was wrong,” Ms. Johnson said. “But I didn’t know how I was going to tell my family and my friends.”

When she did tell them, Ms. Johnson said they didn’t believe her. A week later her parents and siblings came to visit her in Tulsa, while Ms. Griner was also visiting.

“When they actually met Brittney for the first time, they were like, ‘Oh, we get it now,’” Ms. Johnson said.

… Though they differ on how large their family will be (Ms. Johnson says “three max” and Ms. Griner says “a basketball team”), they agree on who will carry the children.

“If Brittney carries the children, all hell would break loose,” Ms. Johnson said. “She would be the worst pregnant lady ever.”

Ms. Johnson’s three sisters (Judy, Grace and Dorothy) and Isaac, and Ms. Griner’s brother and sister (DeCarlo and Shekera), along with Mr. Trejo, Ms. Griner’s former Mercury teammate Lynetta Kizer and Ms. Roy (,the “best man”) stood beside the couple as Jacob Hansen, a Universal Life minister, performed the ceremony under a white canopy adorned with hydrangea and coral and white roses.

The couple, who will use the surname Johnson-Griner, wrote their own vows. Ms. Griner was brief, funny and tender: “With you by my side, I know that I’ll always be taken care of and protected. I will give every ounce of my love that is possible to you, as long as you cook me fried chicken wings and hot chocolate.”

Ms. Johnson’s vows also short and sweet, addressed the complications in their relationship head on — and with humor. “I promise to be the Whitney to your Bobby, the Bonnie to your Clyde, the Ike to your Tina,” she began, to laughter from the small gathering of about 50 friends and family.

The brief and tumultuous high-profile union between the professional basketball stars Brittney Griner and Glory Johnson appears to be ending in much the same way it began — with drama.

In a petition for annulment filed June 5, Ms. Griner, a center for the Women’s National Basketball Association’s Phoenix Mercury, said their marriage of less than a month was “void based on fraud and duress.” Ms. Johnson, the court papers said, pressured Ms. Griner into marrying her with “threatening statements.” (The New York Times featured the wedding in a Vows article on May 17.)

Ms. Griner’s filing in Maricopa County Superior Court in Phoenix came the day after Ms. Johnson announced on Instagram that she was pregnant (with a photo of a cake shaped like a bun going into an oven and the hashtags #SUCCESS #BLESSED #WelcomeToTheJohnsonGrinerFamily).

That day, the Tulsa Shock announced that Ms. Johnson, a forward, would sit out the 2015 season because of her pregnancy. Both women have been suspended for the first seven games of the season by the W.N.B.A. after a domestic violence incident, which came 17 days before their wedding, at their recently purchased suburban Phoenix home.

“It has always been a dream of mine to start a family with someone I love,” Ms. Johnson said in the league’s June 4 news release. “The entire process, from learning our fertility options, to making the sacrifices necessary nine months before this child is born, is merely preparing me to become a great wife and an even better mother.”

While the marriage of Ms. Griner and Ms. Johnson, who said she is not a lesbian, was greeted with skepticism by some, it was largely celebrated by fans

All three dozen of them

, who welcomed the early baby news.

But the excitement was short-lived, as news broke of Ms. Griner’s move to end the marriage in a way that a longtime family-law lawyer, Greg Davis, says was “unnecessarily dramatic.” The legal language is “boilerplate” for an annulment, but the same ends could have been accomplished with a typical divorce, said Mr. Davis, a lawyer in Scottsdale, Ariz.

“This is one of those rare instances where a boilerplate can be inflammatory,” Mr. Davis said. “It makes for some interesting speculation, but in all probability it’s a tempest in a teapot.”

In an interview with ESPN on June 8, Ms. Griner said she was surprised by Ms. Johnson’s pregnancy. She said that the marriage was a “huge mistake” and that she had tried “several times” to postpone their May 8 wedding. “Sometimes you feel pressured into things,” Ms. Griner said. “I went along with it.” (Calls to the couple and their representatives were unreturned.)

I’m betting the real dad is … let’s pull a name out … Carmelo Anthony of the Knicks! (Evidence? None, except that it would be funny.)

In a statement and in the ESPN interview, Ms. Griner said she and Ms. Johnson, who are both 24, had agreed to end their marriage. But Ms. Johnson’s sports marketing agent, D. J. Fisher, said in a statement that his client was blindsided by the court filing, had “put her career on hold” to carry their child and remained committed to the marriage.

The annulment, which Ms. Griner filed, seeks to absolve any responsibility for alimony and to lay to rest any speculation about who is responsible once the baby is born, saying that the pregnancy is “the result of in vitro fertilization using respondent’s eggs and a donor’s sperm. There is no biological connection to petitioner and the unborn child.”

That may not matter, however. Under Arizona law, Mr. Davis said, there is a presumption that a child conceived during a marriage is a child of both spouses. It would be up to Ms. Griner to prove that she has no legal responsibility for the child. “So what is enough to rebut the presumption?” Mr. Davis said. “The fact that she has no sperm? Maybe. This may end up at the Supreme Court if the lawyers want it to.”

If it will make you feel any better, Britney, just try to remember you’re not the first dude who got played by a girl.