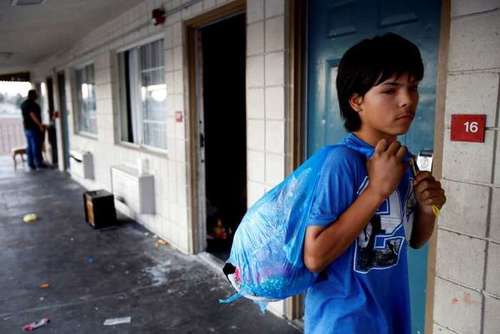 In California, a higher percentage of children are homeless — 5.7 percent — than all other states but Alabama and Mississippi, according to the National Center. They number more than half a million. Budget motels have become the last resort for those with nowhere else to go.

The situation is particularly stark in San Bernardino County, where 9 percent of public school students are identified as homeless, compared with 4.3 percent in Los Angeles County.

“Homeless” doesn’t usually mean they are sleeping on the sidewalk like in Calcutta. A lot of these 9% are, say, living at cheap motels. But still … San Bernardino County, the 12th most populous in the United States with a population of 2.1 million, is not an insignificant place. It’s also a forerunner for the rest of the United States in terms of diversity. The non-Hispanic white population is down to 31%. Hispanics are 51%, blacks 10%, and Asians 7%.

Being inland, San Bernardino County lacks the world-class natural advantages of California’s coastal counties, but its climate and scenery aren’t wholly dismissable either. While the county sprawls all the way to the Nevada border, most of the population lives in what’s simply the greater Los Angeles basin. And yet it still has massive problems.

In particular, the city of San Bernardino, the county seat, is in bad shape, as seen in Mozingo’s article “San Bernardino: Broken City.”