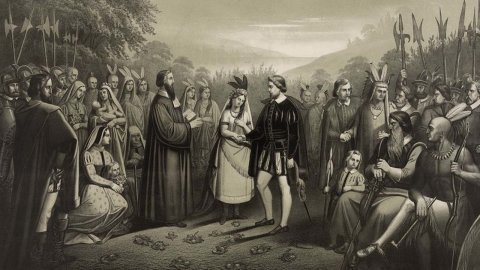 One of the stranger arguments in my new Taki’s Magazine column on Obama’s Origin Story is my contention that:

What the president’s mother did in marrying men of different races picked out by the American intelligence apparatus as future leaders in their homelands was novel only in that she was a WASP adventuress rather than a WASP adventurer. …

In early 19th-century California, sailors from Boston and New York would jump ship in the sleepy Mexican province. The most enterprising Yankees would convert to Catholicism and marry the daughters of local landowners (who were typically triracial). Then in the 1840s, the Yankees helped subvert Mexican rule and sponsor California’s annexation by the U.S.

Similarly, Northeastern merchants arriving in Hawaii married into the native Hawaiian royal family and obtained title to huge expanses of some of the most beautiful land in the world. Christian Bale as John Rolfe in Malick’s “The New World”

Commenters have pointed out that I overlooked the most famous and seminal example of this syndrome in American history: Princess Pocahontas.

Traditionally, proving you are descended from Pocahontas is the Holy Grail of American genealogy. According to this 1986 study, descendants of Pocahontas included Senator Byrd and all the other famous Byrds (e.g., the South Pole explorer), New York mayor John Lindsay, founding father Gouverneur Morris, John Randolph of Roanoke, and Robert E. Lee.