2017 Was the Year When Robots Came Out

In late December, people starts making end-of-year lists and analyses, so it’s not surprising to see one about the progress of automation in 2017. A writer at Wired thinks it been a great year for robots, when they began to be seen walking around and interacting with their environment, rather than being bolted to the factory floor for repetitious tasks.

Below, a robot barista made its debut in the Cafe X of San Francisco, where the owner says that he uses the machine because it is more efficient and cheaper than human workers. 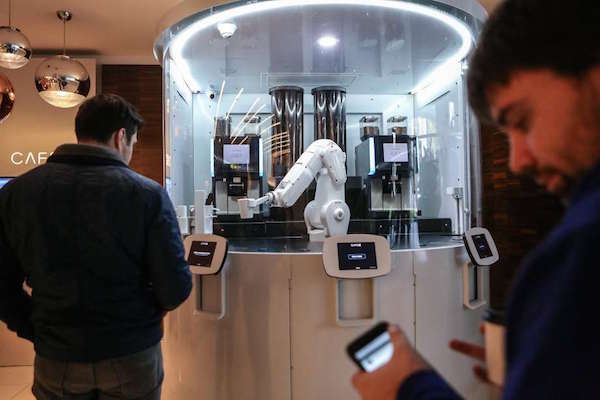 During the past year central aspects of robotics came together: the hardware become more dependable, and the brain power ramped up.

Now this is all great news from a tech progress viewpoint, but not so much when considering future job loss of humans to automation.

THE WORLD SEEMED different this year, yes? Like something strange has been walking and rolling among us? Like we’re now sharing the planet with a new species of our own creation?

Well, we are, because 2017 was the year that the robots really, truly arrived. They escaped the factory floor and started conquering big cities to deliver Mediterranean food. Self-driving cars swarmed the streets. And even bipedal robots—finally capable of not immediately falling on their faces—strolled out of the lab and into the real world. The machines are here, and it’s an exhilarating time indeed. Like, now Atlas the humanoid robot can do backflips. Backflips

“2017 has been an amazing year for robotics,” says roboticist Sebastian Thrun, a pioneer of the self-driving car. “Why 2017? Why did it take us so long?”

Well, it was a confluence of factors, namely the cheapening of sophisticated hardware combined with better brains. “In the past, in robotics we had not-so-smart software with hardware that would break all the time, and that’s not a good product,” Thrun says. “It’s only recently that both computers have become smart enough and that robot hardware has become reliable enough that the very first products start to emerge.”

Perhaps the biggest leap in hardware has been sensor technology. To build a robot you don’t have to babysit, you need it to sense its environment, and to sense its environment it needs a range of sensors. Not just with cameras, but with lasers that build a 3-D map of the robot’s surroundings. These kinds of components have gotten both far more powerful and far cheaper.

“I kind of talk about this finally being the golden age of robotics, and that means that for the first time in the last 12 months or so you see robots really becoming prolific,” says Ben Wolff, CEO of Sarcos Robotics, which makes the most bonkers robot arms you’ve ever seen. “And I think it’s because we’re finally at that crossover point, where the cost has come down of components while the capability of the components has increased sufficiently.”

Like, come down big time. One sensor cost Sarcos a quarter of a million dollars in 2010. Today, it’s $8,000—that’d be 3 percent of the cost just seven years ago. Other components like actuators—the motors in the joints of something like a robot arm—are also falling steadily in cost. Today, an actuator that once cost $3,500 is closer to $1,500. And it’s actuators, perhaps more than any other component, that promise to take robotics to the next level in the very near future.

Loaded with cheaper, supercharged sensors, robots are finally capable of tackling the uncertainty of the human world. Whether humans actually want that is another question. Take delivery robots, for instance. In San Francisco’s chaotic Mission neighborhood this year, a robot called Marble began picking up food and delivering it straight to customers’ doors.