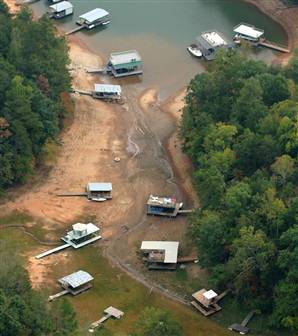 Atlanta is close to recording the dryest year in its history. But even if rainfall over the next couple days rescues the city from that unfortunate statistic, Georgia and the general area are facing "exceptional" drought conditions. (Pictured is Lake Lanier, a drastically reduced source of water for Atlanta, currently 20 feet below normal.)

In October, I reported that the state of Georgia had no plan of what to do if the unthinkable catastrophe happened and the water were to run out: Water Supply: Where the Overpopulation Rubber Hits the Road. (See also No Backup if Atlanta's Faucets Run Dry.)

Now Georgia at least has a short-term plan, although the sight of people lined up with buckets to get water from a tanker truck like some third world country may be deeply unsettling. Particularly if the National Guard must be called up to deliver water to a major city.

The state of Georgia said it has lined up contracts with vendors to bring in bottled water and tanker trucks that could dispense water into jugs, jars and buckets.

"Are we going to get to that point? I don't know. But the most important thing is to be prepared," said Buzz Weiss, spokesman for the Georgia Emergency Management Agency.

But the state, the city of Atlanta and the Georgia National Guard, which could be called into action by the governor to deliver water in an emergency, have yet to work out the details of exactly where the water would be distributed and how, saying it is too soon to say where it might be needed.

In any case, those are just emergency measures for supplying people with the water they need for drinking, cooking, bathing and flushing the toilet. Atlanta and other communities have yet to settle on a long-term solution if the water runs out. [Amid drought, Georgia is lining up tankers and bottled water, but still has no long-term plan, Associated Press, Dec 5, 2007]

The skunk at the garden party here is immigration-fueled population growth. Georgia has mushroomed to double the population it had 1960, from 4 million then to over 8 million counted in the 2000 Census. So not only has the supply of water decreased (droughts are a normal part of nature) but the demand has increased enormously.