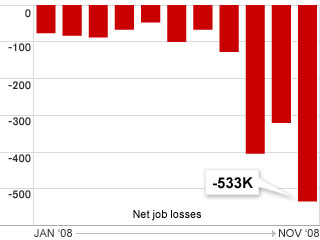 The economy shed 533,000 jobs in November, according to a government report Friday - bringing the year's total job losses to 1.9 million.

What is less obvious here is what the real picture is for American workers.

There has actually been a recent decline in the illegal alien population the US. What is less obvious is how many of those workers were originally reported in employment statistics(i.e. those falsely using social security numbers).

The estimate of the total number of outstanding guest worker visas is tricky-because good figures on that are hard to find-since there is a constant conversion of some workers to green cards-and others may temporarily repatriate. However, I think a growth in the guest worker population of 200,000 is a conservative estimate.

We also need to look at the increase in self-employment in marginal—or illegal—businesses and growth of the prison population as those figures emerge for 2008. The decline in job quality for Americans has been even more striking.

Still, this suggests the overall picture of jobs growth relative to the American work force is even worse than is being portrayed in the news. Something that can be done rapidly is to substantially raise fees on all guest worker programs, raise fees for all forms of legal immigration, eliminate all forms of legal familial immigration other than those of spouses and minor children and to enforce employer sanctions to continue the reduction of the illegal alien population in the US.