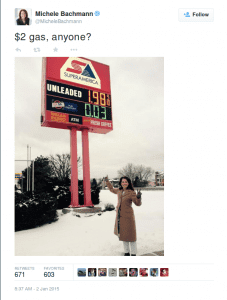 Crude oil prices collapsed today almost back to their January lows. Oil has more than halved in 6 months. The invaluable dissident financial webzine ZeroHedge offers an appallingly cogent reason: Another Conspiracy Theory Becomes Fact: The Entire Oil Collapse Is All About Crushing Russian Control Over Syria

It is not necessary to accept all the details in the ZeroHedge essay to recognize reality: Saudi Arabia’s geological endowment is such that for many years all higher cost oil development has been economically contingent on constrained production by the Saudi Kingdom. In a mindlessly free market world all oil supply would be sourced there for quite some years.

Michelle Bachmann was ridiculed for her comment Bachmann: I'll bring back $2 gas By Charles Riley CNN Money August 2011. In fact she was obviously reflecting what she had learned as a reportedly assiduous member of the House Intelligence Committee: America has always had the power to force down gasoline prices.

From VDARE.com point of view this vindicates our view that Michelle Bachmann was the best 2012 Presidential candidate, deplorably vetoed by the cultural enemy and sabotaged by Conservatism Inc. She really understood matters.

But she was willing to consider breaking oil to help the American consumer. Now it is being done to bolster Israel.

North Dakota oil workers will be mollified by the difference.