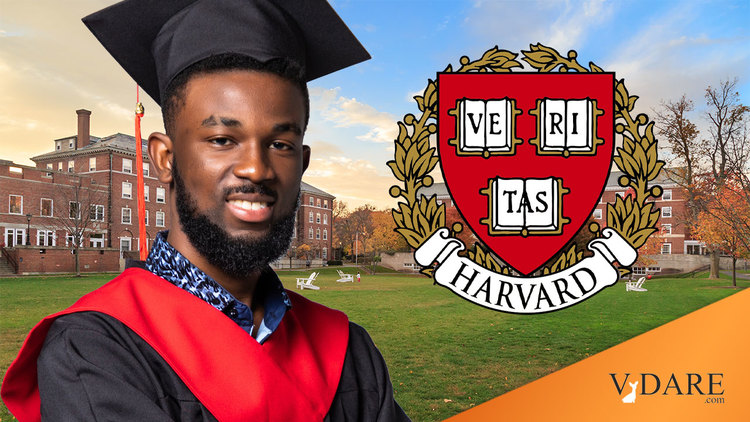 18% Of Harvard's Admissions Offers Are To Blacks

The aftermath of the George Floyd protests and a decreased reliance on standardized tests have led to more diverse admissions at elite universities.

Jianna Curbelo attends a career-focused public high school in New York City, works at McDonald’s and lives in the Bronx with her unemployed mother, who did not graduate from college.

So when her high-school counselor and her Ph.D.-educated aunt urged her to apply to Cornell, on her path to becoming a veterinarian, she had her doubts. But she also had her hopes.

“It was one of those, ‘I’ll give it a shot, boost my ego a little bit,’” she said, laughing infectiously, of her decision to apply.

Then she got the unexpected news: She was accepted. She figured she was helped by the fact that Cornell, like hundreds of other universities, had suspended its standardized test score requirement for admission during the coronavirus pandemic.

I call this the Not So Great Reset. For the 30 years I’ve been getting paid to write, I’ve been pointing out liberal elite hypocrisy. For example, we are told that IQ is fringe pseudoscience, but the Ivy League and Silicon Valley are obsessed with getting high IQ people.

And these hypocritical policies have been wildly successful. Several tech firms are worth over a trillion dollars and Harvard’s endowment is over $40 billion.

But now that the pandemic has disrupted the normal annual workings, we find out that elites have been less hypocritical geniuses and more slaves to inertia. Over the last year, it has been as if, when forced to rearrange how they do things due to minor problems like the SAT not being held, they suddenly realized: Oh my god, Sailer was right, we have been hypocrites! Well, we must do the right thing.

She also said she believed that protests kindled by the death of George Floyd had caught the attention of admissions officers, inspiring some to draft essay questions aimed at eliciting students’ thoughts on racial justice and the value of diversity.

College admission essays were already one of the curses of the 21st century. Can you imagine how dire they became during the Racial Reckoning?

“Those protests really did inspire me,” she said. “It made it seem like the times were sort of changing, in a way.”

Whether college admissions have changed for the long haul remains unclear. But early data suggests that many elite universities have admitted a higher proportion of traditionally underrepresented students this year — Black, Hispanic and those who were from lower-income communities or were the first generation in their families to go to college, or some combination — than ever before.

The gains seem to reflect a moment of national racial and social awareness not seen since the late 1960s that motivated universities to put a premium on diversity and that prodded students to expand their horizons on possible college experiences.

“I would say the likelihood is that the movement that arose in the wake of George Floyd’s murder has exerted some influence on these institutions’ admissions officers,” said Jerome Karabel, a sociologist at the University of California, Berkeley, and a historian of college admission.

“But I think an equally important factor may be the effect of the pandemic on the applicant pool — they had a much broader range of low-income and minority applicants to choose from.” …

Only 46 percent of applications this year came from students who reported a test score, down from 77 percent last year, according to Common App, the not-for-profit organization that offers the application used by more than 900 schools. First-generation, lower-income, as well as Black, Hispanic and Native American students were much less likely than others to submit their test scores on college applications.

Schools had been dropping the testing requirement for years, but during the pandemic a wave of 650 schools joined in. In most cases, a student with good scores could still submit them and have them considered; a student who had good grades and recommendations but fell short on test scores could leave them out.

Most schools have announced that they will continue the test-optional experiment next year, as the normal rhythm of the school year is still roiled by the pandemic. It is unclear whether the shift foretells a permanent change in how students are selected. …

At Harvard, the proportion of admitted students who are Black jumped to 18 percent from 14.8 percent last year.

I would say that without racial favoritism, perhaps 1.8% of the applicants accepted by Harvard would be black, so their acceptances are inflated by an order of magnitude, which is rather a bit. Now this doesn’t mean that 18% of Harvard’s freshman class will be black because Stanford, Yale, and Princeton will also have accepted many of the same applicants. The top colleges used to get together at a hotel each year and monopsonistically allocate top applicants so that smart kids couldn’t play the rich colleges off against each other. But during the Racial Reckoning, precious blacks are too precious for gentlemanly connivance.

If all of them enrolled, there would be about 63 more Black students in this year’s freshman class than if they were admitted at last year’s rate. Asian-Americans saw the second biggest increase, to 27.2 percent from 24.5 percent, which could be meaningful if a lawsuit accusing Harvard of systematically discriminating against Asian-Americans is taken up by the Supreme Court.

The problem with letting even more mediocre blacks into Harvard is you aren’t making them any smarter, you are just making them more entitled. So rather than be the call center manager or whatever they are cut out to be if they had gone to the U. of Arkansas, they feel they, as Harvard graduates, deserve to be Professors of Hair-Touching.