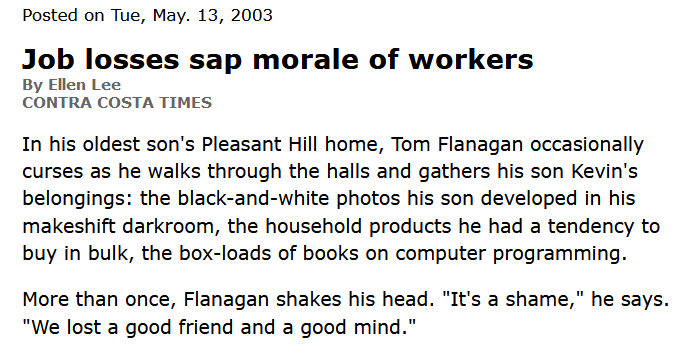 Today's Letter: A Reader Mourns An American Programmer Who Lost His Job –And Took His Life

FROM: Gene Nelson [email  him]

On May 13, The Contra Costa Times reported on an event that should trouble us all—the suicide of Kevin Flanagan, 41. (“Job losses sap morale of workers,” by Ellen Lee – elee@cctimes.com) Kevin was not a drug addict, a convict, or a ne'er-do-well; he was a trained computer programmer with years of experience whose job was sent overseas. The Contra Costa Times story reports that “led by the information-technology industry, 3.3 million service jobs and $136 billion in wages will move from the United States to such countries as India and Russia over the next decade or so.”

At the same time, the federal government is cooperating with hugely-profitable computer companies to relax H-1b visa restrictions, so thousands more programmers from India, Pakistan, and other impoverished countries can pour into the U.S.—to compete with American programmers like Kevin. In 2002, Nobel Prize-winning economist Milton Friedman characterized H-1B visas as a “government subsidy program.”

A month ago, Kevin Flanagan found out that he'd be losing his job at the Bank of America's Concord Technology Center. That same day, he took his life—in the parking lot of his former employer.

It wasn't that Flanagan was surprised to lose his job—he'd seen it coming for months, as his father told the paper. Flanagan had watched as veteran co-workers were forced to train newcomers from India—then fired and replaced by the immigrants. One former employee told the CC Times that employees at Concord feel like they're “on death row. Every day you think, 'Is this the day I'm gone?' he said.”

Typically, the Contra Costa Times story did not draw the connection between the loss of high-tech jobs and immigration. But one of the story's sources did; Peter Bennett, a refugee from the technology consulting industry, who founded a group called NoMoreH1B.com. On its site, Bennett estimates that “approximately 800,000 highly-skilled U.S. workers are now unemployed as a direct result of Congress' H-1B visa legislation.”

The story also gave the impression that the Bank of America was shifting jobs overseas and hiring immigrants to preserve its competitiveness. But the numbers tell a different story—that of a prosperous bank which has let greed trump any sense of patriotism or social responsibility.

The Bank of America (Chairman and CEO Kenneth D. Lewis) is a public company. According to its most recent report to Securities and Exchange Commission (10-Q), the company's first quarter revenues this year were $8.85 billion—up $0.3 billion from the same quarter last year. Data processing expenses consumed only 2.94 percent of revenue—hardly a drain on profits.

But that hasn't stopped Bank of America from using immigrants to undercut American workers. The U.S. Dept. of Labor H-1B website shows that in just two years, the company has imported about 200 technical professionals, mostly managers. Many received low pay for the work they perform—for instance, one “Securities Operations Analyst” who is paid only $38,100 annually.

This is just the tip of the iceberg, since most of the bank's newly imported employees are likely to be contractors who report to the imported managers.

How do I know this? I've read it in press releases from “outsourcing” firms, mostly based in India, with names like as Syntel, Cognizant, Tata (TCS), Exult, HCL Infosys, Wipro, and Satyam—all list Bank of America as a client. Between them, they employ thousands of Non Immigrant Visa (NIV) holders who don't appear in the above Federal tabulations.

In fact, many new Bank of America contractors fail to appear on California or Federal tax rolls at all, since they are paid by foreign firms with foreign currency via the L-1 program. (But they and their families use government services, so U.S. citizen taxpayers pay those bills.)

To learn more about the H1B program and how to fight it, see www.ZaZona.com and www.numbersusa.com.

[Gene Nelson is a U.S. citizen and a computer programmer, who has been seeking employment since 2001. His former employer still employs H1B immigrants. Nelson has testified before Congress on the H-1B program. His upcoming book is An American Scam - How Special Interests Undermine American Security with Endless "Techie" Gluts.  E-mail him for a 22 - page special Congressional Summary.]