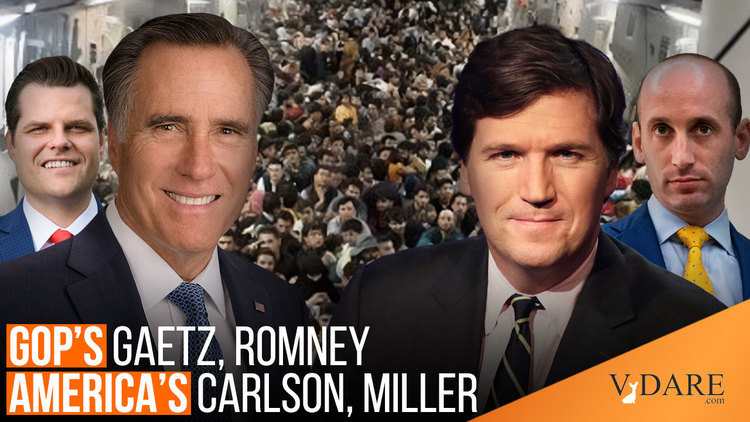 An Outraged VDARE.com Reader Condemns GOP Leaders Who Will Do More For Afghan "Refugees" Than For Their Own Constituents

From: An Outraged VDARE.com Reader [Email him]

I have never seen so many politicians...including Republicans...act in such a hasty and irresponsible manner in an attempt to bring hundreds of thousands of Afghans into the United States.  These politicians and other government official's proclamations about the need to "cut red tape" and bypass the existing, and already marginal security protocols, to expedite this high risk action, reeks of hysteria rather than of reasoned governance.

Ironically, these politicians never respond so quickly when the interests of their own constituents are at stake!

Yet, the interests of their constituents, and the corresponding national interest, are being compromised by the massive influx of these dysfunctional people who will be a burden to the communities, if not posing an actual threat to them given the violent and lawless nature of the Afghan culture that is evident in their own nation and their refugee populations in Europe.

It is blatantly obvious that our political leaders are being motivated by the secular religion of Western guilt that is both irrational and insatiable, even to the point of national suicide.  One would hope by this juncture in history, e.g., post 9/11 and other terrorist attacks, the dystopian effects of Third World migration to the Western nations, would lead them to be wiser and more cautious, but apparently this has not occurred.  As was said by Talleyrand of the Bourbon dynasty, who had a brief but failed restoration of power after the abdication of Napoleon, "They have learned nothing, and forgotten nothing."

James Fulford writes: It looks like we’ve used the “learned nothing and forgotten nothing” quote 18 times—mostly in reference to Republicans.