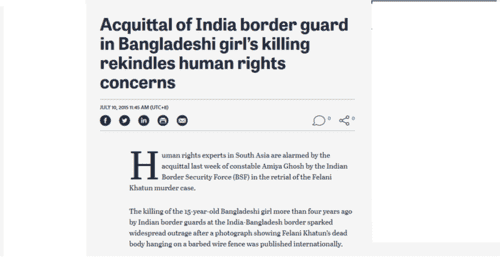 From: An Angry Californian [Email him]

India has had to deal with illegal migration from its poorer neighbor, Bangladesh, and has a long standing "shoot to kill" order for those who attempt to breach the fence.

Apart from the two grisly pictures in the link above, note the following quote from the same:

"On the dawn of January 7, 2011, Felani’s father and uncle managed to crossed the barbed-wire fence of the border by using a ladder. But Felani’s clothes were entangled in the wire and as she struggled to free herself, she was shot. Eyewitnesses had informed the media that the teenage girl was still alive while dangling on the barbed wire for nearly an hour. Even after she breathed her last, her dead body was left dangling for the next four hours."

The Border Between Bangladesh And India Has Become A Death Trap, By Rokeya Lita, Huffington Post, December 21, 2016

I am not recommending we descend to this level of brutality in protecting our borders from illegal immigration, but obviously we need to do better.