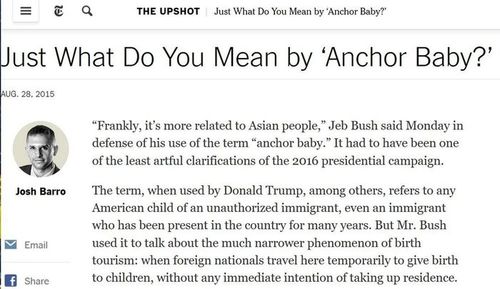 From: A Young Illinois Reader [Send Him Mail]

The NYT's Josh Barro [Email him] doesn't care for the term "anchor babies."

Personally, I too would like to see the term replaced by something more appropriate. Perhaps "garrison force for Occupied America" would work. I think that does more justice to the phenomenon.

Seriously, if liberals find the term "anchor baby" to be dehumanizing, they should have thought of that before creating—over the span of just a few decades—a "war of the cradle" for the cultural and ethnic future of an erstwhile nation-state. Given the magnitude of the Immivasion, the question of who people are as individuals must increasingly become subordinated to the question of what people are as members of a tribe. Dehumanization is the inevitable consequence of Balkanization. Ironically but not surprisingly, it is liberals and their "cuckservative" accomplices who are creating the conditions in which individualistic, universalist values must become untenable.

To put it differently, if liberals didn't want Americans thinking of pseudo-citizen anchor babies as ipso facto invaders, they shouldn't have allowed tens of millions of foreigners to initiate the process of national dispossession.

Numbers are of the essence!