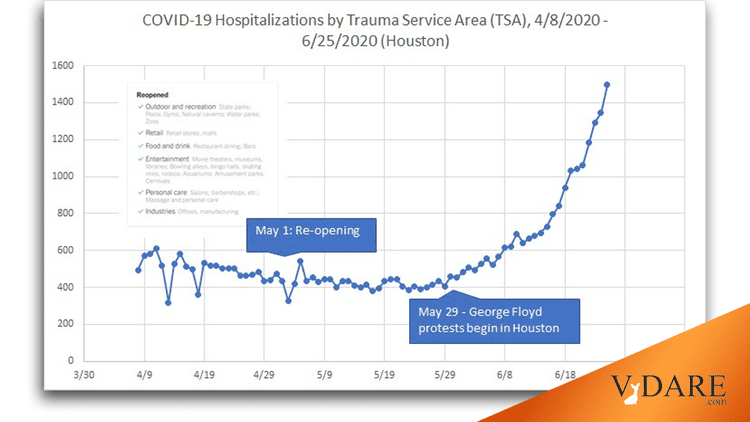 From: Anonymous Tim in Texas [Email him]

I've been a daily reader of VDARE.com for years. I greatly enjoy the content.

Anyways there is a lot of attention regarding corona (or whatever you'd like to call it) virus spikes in certain states such as Texas or Florida. The media, and even Governor Abbott, muse that the new cases have arisen from places like bars and beaches, and might've been a result of re-opening too soon. I decided to look at the hospitalizations data for Houston, since that is one of the hotspots. The major re-openings of beaches, bars and restaurants occurred on May 1. However hospitalizations did not start to increase appreciably until early June. So what did really cause the spike?

Well, on May 29 George Floyd protests began in Houston and notice the dramatic escalation in cases afterwards. (I made the chart myself with Excel from Texas State official data—source link is below.) 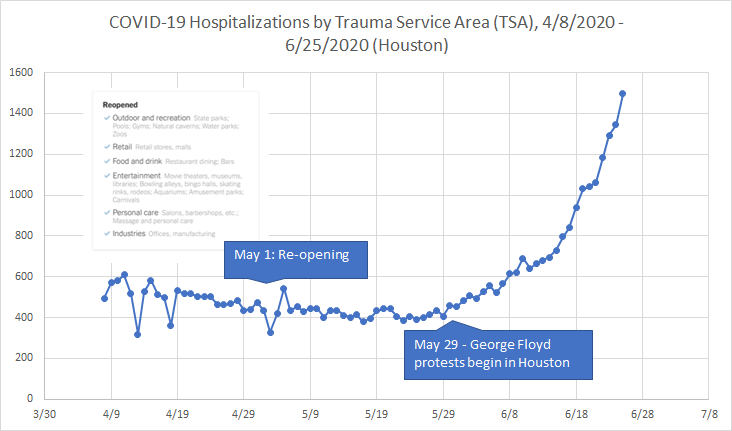 Correlation does not prove causation, as one could say the Memorial Day holiday could've caused the spike. And of course there is an incubation period. However at the least the data does raise the possibility it was the protests that were the more direct cause compared to the re-opening in general. There is anecdotal evidence of positive tests resulting from the protests; see Houston Protesters Begin to Fall Ill With Coronavirus After Marching for George Floyd, by Aila Slisco, Newsweek, June 16, 2020. All the data and information I've found is readily available but of course the "journalists" are too stupid, lazy, and/or biased to dig into it.

Protests took place in Northern cities, but it's my belief that southern and western states were more susceptible because of the warmer climate driving people indoors in close proximity.

And of course, Houston didn't have protests any more than any other city with a large minority population, it had riots: