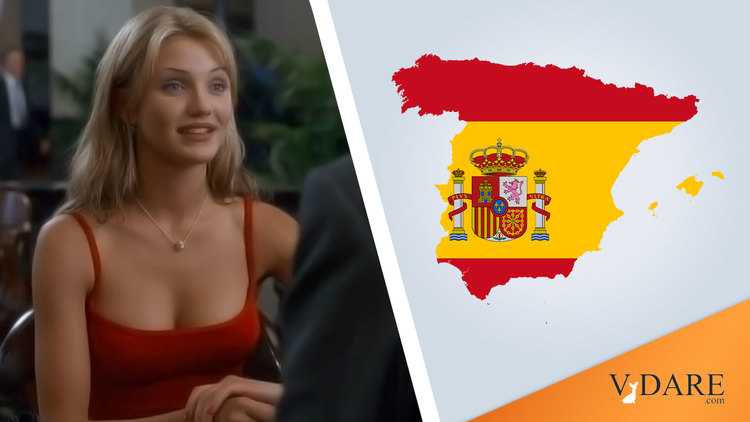 A Reader Wonders Why Some Celebrities Like Cameron Diaz Don't "Identify" As Hispanic. Answer: They're SPANISH, Not Mexican

Something which I find to be rather curious is how certain Spanish-surnamed celebrities (e.g. Cameron Diaz, Frankie Muniz, Bob Vila, Charlie Sheen (Real name Carlos Irwin Estevez) do not identify, nor are identified by the media as “Hispanic” or “Latino.” I wonder if this is due to the fact that they rose to prominence before those pseudoethnicities became established. However, I’d like to hear your thoughts on the matter.

I just had to pass on this outstanding piece from Claremont Review of Books, regarding the origin of those aforementioned appellations: The Invention of Hispanics—What it says about the politics of race, by Mike Gonzalez, Fall 2019. If I hadn’t known any better, I would have sworn that it was penned by James Fulford, or one of the other authors at VDARE.com.

James Fulford writes:  Well, the fairly obvious point is that “Hispanic” in American politics is in effect a euphemism for “of South American Indian descent.” The only reason Spanish-surnamed people can be considered a racial minority, rather than a national group like Poles, Irishmen, or Frenchmen is the fact that Mexico, right there on the American border, is mostly mestizo and Indian, and that  Mexican and Guatemalan immigrants tend to come from the lower classes, which means that illegal immigrants, and legal farmworkers are even more heavily minority than the Mexican nation as a whole.

I looked all these celebrities up on Wikipedia: Cameron Diaz’s father is Cuban, Charlie Sheen’s grandfather, a man named Francisco Estévez Martínez, came from Salceda de Caselas, Galicia, Spain  (his grandmother from Tipperary) and Charlie’s mother was a white American from Dayton. Bob Vila is also a Cuban-American, and Frankie Muniz’s mother is half Irish and half Italian,  while his father is Puerto Rican, but as Wikipedia notes, of Spanish descent from Asturias.

All of them are visibly very white. Because of the factors described in the Claremont Review of Books, there is sometimes money in claiming that your Hispanic surname makes you a minority for purposes of governmental classification, it’s embarrassing to a lot of white Spaniards to do so.