From: An Anti-Communist Reader [Email him]

One need not have the observational skills of Sherlock Holmes to see that the likely nomination of Donald Trump as the GOP standard-bearer has unhinged those Op-Ed writers whose columns are carried by The Washington Post, sometimes referred to as The Washington Compost.

George Will has openly and repeatedly stated that he will not vote for Trump; neither will Michael Gerson, the "Christian Evangelical" of the group, who served as a speech writer for Jack Kemp and adviser to President George W. Bush. Kathleen Parker adds a distaff name to the chorus of "No vote" for Trump, and these are the "conservative'' columnists.

Along with the untethered liberals who are the most often present in these pages, the paper has been a cauldron of anti-Trump rhetoric from the outset of his campaign, but a recent Op-Ed by "contributing columnist"  Robert Kagan,  [Email him] of the Brookings Institution, reminded me that Trump is not the first person to have faced this type criticism from the media, most of it ad hominem.

Entitled, "How Fascism Comes to America," (May 20, 2016) Kagan's first sentence tells it all: "The Republican Party's attempt to treat Donald Trump as a normal political candidate would be laughable were it not so perilous to the republic."

The lengthy column then begins with its shopping list of people who have warned voters about Trump-like figures, including De Tocqueville and Hamilton, then winding up with the comparison that Trump shares a lot in common with Putin, although il Duce and Hitler are also up for comparison. Rebutting Mr. Kagan would require a much longer letter, but let it be said that, to Robert Kagan, the candidacy of Donald Trump is a disaster in the making for the country, but rarely has such journalistic vitriol been in the form of personal attacks: "phoney billionaire," "television huckster," et cetera., all of which are not intended to damn with faint praise. Has this ever happened before? I believe it has, but in a different time.

For those of a certain age - mine - I can think of only one other figure in American political life who endured this form of deranged and irrational commentary. The following comments by another reporter may provide a clue: 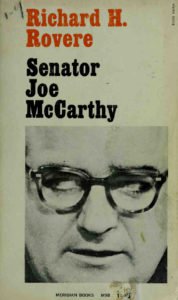 No bolder seditionist ever moved among us - nor any politician with a swifter, surer access to the dark places of the public mind...Like Hitler, (he) is a screamer, a political thug, a master of the mob, an exploiter of popular fears...He was a master of the scabrous and scatological; his talk was laced with obscenity. He was a vulgarian by method as well as probably by instinct. He made little pretense to religiosity or to any specials of moral rectitude. ..He was the prince of hate...and had become liberated from the morality that prevailed in his environment..."

The author of the words was Richard Rovere in a book [Senator Joe McCarthy ] published in 1959; the politician, was Sen. Joseph R. McCarthy, whose defamation was aided and abetted by the cartoons of Herbert Block, aka "Herblock," who was employed by The Washington Post.

James Fulford writes: You can find many comparisons of Trump to Senator McCarthy, mostly by neoconservatives.  An article of faith with neoconservatives is  that no matter how evil Communists were, McCarthy was worse.  For the truth about McCarthy, see Ann Coulter's Treason: Liberal Treachery from the Cold War to the War on Terrorism,  and M. Stanton Evans's Blacklisted by History: The Untold Story of Senator Joe McCarthy and His Fight Against America’s Enemies.

For some idea of what McCarthy was up against, see American Betrayal: The Secret Assault on Our Nation's Character by Diana West.