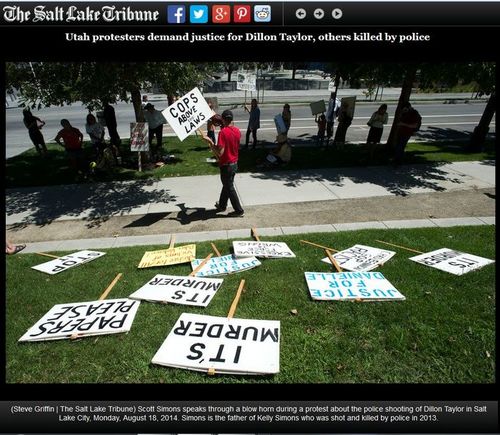 From: An Anonymous Reader (Not In Utah) [Email him]

The mainstream media alerts the nation and the world apparently every time a black person is shot by a white cop. Yet an incident that happened in Salt Lake City, Utah on Monday August 11 is not national news, certainly not international news. [ Man killed by police said he'd die before spending lots of time in jail (4 photos) Family says victim was not armed when officer shot him, By Morgan Jacobsen, Deseret News, August 12, 2014]

Dillon was white and he was UNARMED when he left the 7-11 at 7pm with his brother and his cousin, police suddenly arrived screamed that he should 'lay on the ground' and as he attempted to hitch up his pants preparatory to following the command he was shot dead by an African-American Salt Lake City policeman.

The media is only referring to the officer, as 'not white’. The officer's name is also being withheld. The officer was wearing a video cam on his vest. Both the video and the 911 call are being withheld from the public. The local media is playing it cute also as can be expected from the cultural Marxists.

This form of news reporting the choosing of what incidents to promote WORLDWIDE shows that there is group forming and molding public opinion.

James Fulford writes: As Ann Coulter wrote in No Facts, No Peace In Ferguson: “You Don’t Want To End Up Looking Like Rich Lowry…”, it's a mistake to take any of these "facts" at face value. I just want to note the size, shape and color of the possibly legitimate protest in Salt Lake City, pictured above. They have also had a candlelight vigil and moment of silence.