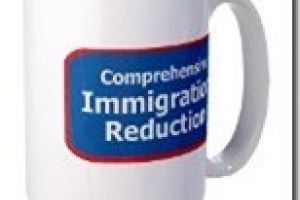 Some years ago, I suggested to Rep. Tancredo and other immigration reform leaders such as Roy Beck and Peter Brimelow that the movement needed a single slogan that all activists could support. I said that the slogan should evoke an immediate positive response from Americans, who would intuitively agree with its message.

Advertisers spend millions of dollars hiring advertising agencies to create a simple message that resonates with the public. The immigration reform movement ignores this at its peril.

The slogan that I suggested: “Comprehensive Immigration Reform”.

The reaction to this was endlessly quarrelsome. “We cannot say this because of that.” “It is too simple.”  “It is too complex.” etc etc.”

In short, the immigration leaders could not get their act together.

It is worth pointing out that the Left has a great ability to get on a theme and stick with it. It becomes their central talking point. For example, Sen. Chuck Schumer inadvertently revealed to an open mike that Democratic strategy was to bash the Tea Party as “extreme”. “I always use extreme,” Schumer said. “That is what the caucus instructed me to use.”

I further suggested that Tancredo and the Immigration Reform Caucus should create one omnibus immigration bill and that would encompass all the reforms that immigration activists sought.

This met with stiff resistance from Roy Beck and NumbersUSA.  It was Beck’s opinion that legislation should be introduced piecemeal.

Well, how far have any of those individual bills gone?

In contrast, amnesty supporters, including John McCain, were not hesitant in coming up with a “Comprehensive Immigration Reform” bill and trying to push it through the U.S. Congress. It failed, twice.  That showed the strength of the immigration control supporters (many hats off to Roy Beck and NumbersUSA). But it also showed their weaknesses in not countering with a “comprehensive” bill that addressed all the issues.

Rethinking the issue, I realized that “reform” is always used to denote progress and improvement, no matter how obnoxious the actual reforms might be. My new formulation: “Comprehensive Immigration Reduction”.

I went back to Roy Beck, Peter Brimelow and others and again encountered the same nebulous, unable-to-get-our-act-together objections.

The leaders of immigration restriction have floated “Time Out” and “Moratorium”.  Both of these imply that maybe for six months, two years, who knows how long, we can restrict immigration to some degree and then go back to what we have now.  Is that what anyone wants?

My question: Why is VDARE.com trumpeting its daring in examining a moratorium that nobody wants and something else that is only part of the problem? Nowhere does it say the total number of immigrants is too high. If VDARE.com has an overall endgame for immigration, I have yet to find it.

Why doesn't VDARE.com have a clear statement of purpose? Or does it feel that it is doing its duty by constantly reporting on the abuses, harm and negative impact of massive immigration without any discussion of a "comprehensive" solution.

NumbersUSA, asserts—rather weakly, for all its good deeds:

"Comprehensive" seems a word that is an anathema to NumbersUSA. This violates the basic rule of warfare, politics and football: "Concentrate your forces at a point of attack."

Note that nowhere does NumbersUSA state that the overall objective is immigration reduction. Further, one of their pages lists a Foreign Worker Time-out.  Apparently, when the time-out is over, we can go back to having continued massiveimmigration.

But if the chief difficulty of is “how many they (sic) are, doesn’t that automatically lead to wanting to limit, restrict and reduce the number of immigrants? NumbersUSA has no strategy whatsoever for actually improving the situation by reducing how many “there are.”

(Note: both FAIR and NumbersUSA use the “average” immigration for the United States, but that includes the extremely high numbers at the turn of the twentieth century, rather than the much lower numbers after the 1924 Immigration Act. At one time, NumbersUSA had the preferred number of 250,000 on its website, but I no longer see that, although maybe I was not thorough enough.)

Or, has Roy Beck, Dan Stein, Peter Brimelow turned into a gaggle of Immigration RINOs [Restriction In Name Only]?

That is, want to complain about the matter but are unwilling to endorse strong, comprehensive policies that would end all the abuses and drastically/extremely reduce the number of new arrivals?

To put this in football terms, VDare.com, NumbersUSA and FAIR only play defense. If any Congressman came to them and asked them for a wish list of what they want concerning immigration, they could not answer.

And that does not include all the categories.  As famous as Roy Beck is for his gumball presentation, neither he nor NumbersUSA nor the Center for Immigration Studies give any figures that tell us how many gumballs are coming into the United States.

So here is a number as best I can determine—my estimate!

Two million immigrants enter this country every year. This is a staggering number. Yet, neither VDARE.com, NumbersUSA, FAIR, nor any other organization communicates this to the public. Because they are not communicating it, the public is totally unaware.

Here is some mini-market research to determine the message for the immigration control movement. First, respondents were about split between Control and Restriction.

Which slogan do you favor to describe the Overall Goal of the Immigration Control Movement? (24 Respondents)

Second, when asked between messages that included enforcement, protection and reduction, they were evenly split.

In summary: the no-slogan, piecemeal approach has not been successful in reducing immigration into the United States.

Without a focus on COMPREHENSIVE IMMIGRATION REDUCTION, the movement is unlikely to have any positive impact in the future.

Much of the blame for this lies directly at the feet of the most prominent immigration activists. They have failed to create an effective immigration message and repeat it endlessly to the American public to gain support and generate the political will for action.

Paul Streitz (email him) was a founder of CT Citizens for Immigration Control. He was a Minuteman on the AZ border in 2005. He is the author of America First: Why Americans Must End Free Trade, Stop Outsourcing and Close Our Open Borders.

Peter Brimelow replies: Paul Streitz is a sometimes-irritating old friend. To focus on the nomenclature issue: I agree with him that choosing the right slogan can be critical—but it’s not as important as saying the right thing. The people Paul calls “prominent immigration activists” certainly deserve blame, but their not hammering on the need for an anti-unemployment immigration cut-off at all is more important than what name they call it.

I must admit I still prefer “moratorium” i.e. zero net immigration (which I don’t think necessarily implies a short duration), partly because FAIR had just come out for a moratorium when I wrote my 1992 National Review Time To Rethink Immigration cover story that got me into this mess.

But the great advantage of a zero net immigration goal is that it can be applied across the board—anything less than zero means arguments with the various racial groups who all (except for whites, of course) think their own group should be favored.

Other readers have suggested we need a clearer statement of purpose. I always think it’s pretty obvious, but I suppose I should get round to writing one.