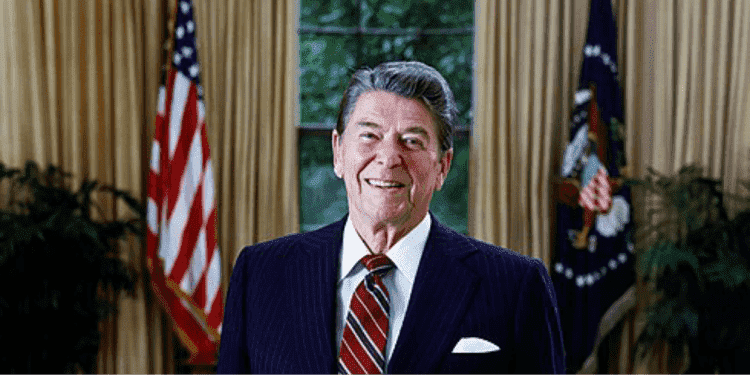 According to Bette Davis, in a May 22, 1986 guest appearance on The Tonight Show with Johnny Carson, his Hollywood peers were not surprised when Reagan was elected California governor in 1966 and, fourteen years later, United States president.

Like other Reagan admirers, I have read thousands of words about him this week.

But not one article mentioned the strange disconnect between Reagan, the California governor, and President Reagan, regarding the pitfalls of welfare.

As governor, Reagan identified and disapproved of welfare as a long-term crutch.

Yet Reagan as president ignored the inevitability of heavy welfare use by 3 million aliens legalized when he signed the Immigration Reform and Control Act of 1986 (IRCA).

Reforming welfare in California had been a long-standing pledge of Reagan's. When first elected governor, he was specifically alarmed by the costly Aid to Families with Dependant Children (AFDC) program. The AFDC caseload had increased nearly five fold from 375,000 cases in 1963 to 1.6 million in 1970.

By 1970, nearly one of every 13 Californians was collecting AFDC. The number of AFDC recipients increased by 40,000 every month.

In a December 16, 1970 interview with California Journal, Reagan said:

"The big villain that has kept virtually all of our savings from being returned to the people in reduced cost of government is the thirty-five year heritage of welfare programs that are out of control. We find ourselves in a position of cutting back on the types of things people should ask of government—parks and everything else—actually cutting those to feed this welfare monster."

Fearing that welfare would bust the budget, Reagan acted quickly by calling for 70 legislative and administrative changes. Through compromise with the Democratic-controlled legislature, the California Welfare Reform Act of 1971 was passed.

Although Reagan was frequently accused of being insensitive to the poor, the most needy California families received increases in their monthly stipends. Those who had been bilking the system were booted off.

By the time Reagan was elected to his second presidential term 1984, he had an expansive concept of America's role in the world.

Basking in America's triumph over Communism, Reagan backed the 1986 amnesty.

In debates leading up to IRCA, a significant minority in Congress questioned what the cost of legalizing such a large number of aliens would be. Their low levels of education, limited English ability and modest job skills presented major hurdles to economic independence.

As it developed, according to a report published by the Center for Immigration Studies and titled "Measuring the Fallout: the Cost of IRCA Amnesty after Ten Years," the Congressional minority was correct. Local and state governments were saddled with high welfare costs.

Ironically, California—where Reagan had vigorously opposed welfare— was one of the hardest hit. Nearly 53 percent of all legalized aliens and their growing families resided in California.

Fortunately for the states, buried in the IRCA fine print was the State Legalization Impact Assistance Grants (SLIAG) program that reimbursed state and local governments for a portion of their public assistance costs.

But, SLIAG paid out only a small percentage of the financial needs of the highly dependent population. Annual federal contributions for each eligible alien under SLIAG worked out to $167 a year — about 4 percent of the cost of educating just one alien child for one year in the public school system.

Although Reagan espoused smaller government throughout his two terms, his administration failed to accurately calculate the welfare costs related to IRCA.

But the financial burden was not Reagan's biggest error in judgment. Reagan idealistically assumed that the new prospective citizens would be anxious to assimilate into the America that he so loved.

As part of the green card acquisition process, the federal government mandated that all amnesty applicants spend 40 hours in English language, history and civics instruction.

The Lodi Adult School, where I teach, offered those classes. While some students were eager to blend into the American fabric, most were not.

I was disappointed that upon completion of the minimum 40 classroom hours, almost all the students to whom Reagan had given the priceless opportunity of becoming American citizens closed their notebooks and walked out of the school.

And, although they had so much more to learn, they never came back.

Reagan was a true American patriot. And I consider him one of the great presidents of the 20th Century. But he was wrong on amnesty—both on its costs and its results.

Today, the number of aliens is four fold what it was in 1986. And the US is grappling with the prospect of another amnesty—in large part because of the example set by Reagan.

JOENOTE to VDARE.com readers: note that this grudging analysis of IRCA posted by immigration lawyer Greg Siskind [email him] on his firm's site www.visalaw.com winks at the idea of continued (and profitable for him) illegal immigration.

"From an immigration point of view, Reagan will best be remembered for signing the Immigration Reform and Control Act of 1986 ('IRCA'). IRCA was a contradiction of idealism and pragmatism, as was the case with the President who signed the bill into law. It took the pragmatic view that the while the government frowned on illegal immigration, we could provide an amnesty to help normalize the lives of millions of American residents. Indeed, millions of American citizens were legalized under the program and owe a thanks to the President for proposing what was then a very controversial plan.

"IRCA also provided hardliners with something they too sought—the deputization of millions of American employers to assist the then Immigration and Naturalization Service. IRCA created the I-9 forms that every employer must check to ensure that an employee is authorized to work in the US.

"The theory of IRCA was that by legalizing the country's undocumented population and then creating a stronger enforcement system, we would end illegal immigration. That was, of course, a naïve proposition. Market forces would soon come into play and the flow of illegal immigrants has only intensified over the last 18 years. [JG: my italics] That has brought us to the current debate over what to do about our immigration system and the debate continues on whether we need a more open system where employers can simply petition to bring over an immigrant worker when it can show that Americans are not available to do the work at an acceptable salary.

"However one feels about immigration, Ronald Reagan deserves at least some credit for trying to address an issue that has been controversial since the country's founding. He attempted to craft a compromise and cashed in his 'political chips' to get the bill passed. Other Presidents have only offered rhetoric and hoped the immigration debate would not get too fierce. Whether IRCA was ultimately helpful or harmful is certainly subject to argument, but no one can say Reagan shirked his responsibilities to try and improve the system.

"Finally, as always, we remind readers that we're lawyers who make our living representing immigration clients and employers seeking to comply with immigration laws. We would love to discuss becoming your law firm. Just go to http://www.visalaw.com/intake.html to request an appointment or call us at 800-748-3819 or 901-682-6455."