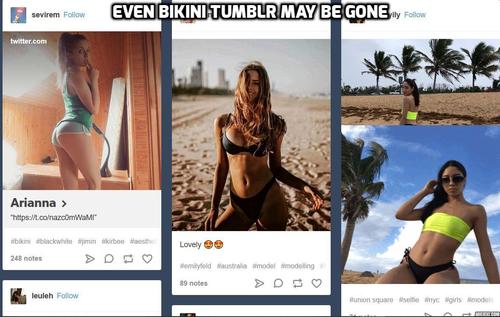 Then They Came For Tumblr: Yes, Tech Totalitarians Can Just Pull the Plug

Ever wonder what it would be like for a website or platform to suddenly just pull the plug on an enormous swath of its users? Not just one or two thought criminals (such as, to pick at random, American Renaissance), or even a few dozen or hundred users, but a massive purge? Well, you are about to see such an act, arguably for the first time.

On December 3, the micro-blogging platform Tumblr announced that in one fortnight, on December 17, all “adult content” will be permanently removed from its site.

Tumblr is like a cross between Wordpress and Twitter. You create your own account/site, which is yours, but is still on the Tumblr platform. The structure of site is such that it is best used for visuals (photos, videos, GIFs, memes) as opposed to longform writing (as in the case of Wordpress) or pithy quips and jokes (as in the case of Twitter). Founded in 2007, for a while it was the “it” platform to be on. I set one up in high school because, well, all the cool kids were doing it. During my first week of college, I mentioned to another freshman that though I was not on Facebook, I did have a Tumblr, to which he replied, “God, you are such a hipster.”

Over the years, Tumblr became best known for three things:

1) It was the original incubator for what we now call “Social Justice Warriors.” Back in 2011, if you wanted to find political opinions expressing outrage about how absolutely everything was unforgivably racist, Tumblr was the place to find it (Great example: “Yo, Is This Racist?”).

2) Fan blogs. Fan blogs are centered around one celebrity, TV show, or what have you, and they just post a lot of photos and GIFs related to the theme and blather on about how much they like it; similar to the teeny bopper magazines of yore.

Since its launch in 2007, the platform has been a popular host for explicit blogs, sex worker websites and porn-centered communities who relished having a safe, unrestricted space to call their own…

… not only was explicit content from that community a key driver of Tumblr’s initial success, it has been essential to the site’s longevity, as countless other more advanced social media networks and apps have saturated the market and chipped away at the company’s share. That Tumblr still exists is due, in no small part, to the loyalty of adult content creators who are now being told that their posts — the bulk of Tumblr’s content — are no longer welcome. (emphasis added)

There are hundreds of thousands, if not more, of loyal Tumblr users who have been running porn-centric blogs for years—some for more than a decade. They have built up voluminous archives to their liking, and in many cases amassed huge followings of folks with similar, shall we say, “tastes.”

Imagine if your Twitter were deleted not because you did anything that violated their terms of service, but simply because Twitter one day decided to change its rules for posting and found that essentially all of your tweets were in violation of their new rules, so gave you two weeks’ notice and then blew it all away. 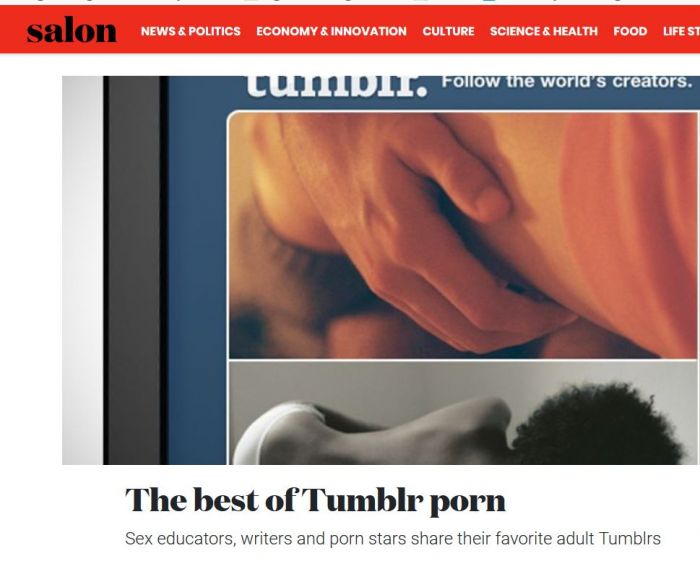 But other important factors were:

Corporations, regardless of size, are certainly prone to making sudden and dramatic changes in course—and this is one such example.

But what makes this so interesting, and noteworthy, is that there is essentially no chance this change will make Tumblr’s user base happy. Tumblr has, in effect, grown tired of one huge segment of its users and is purging them. You might even say they are abolishing this user base, and hoping to Elect A New—and better—one.

The two questions that arise are:

1) Where are all the pornographers going to go?

2) Will Tumblr find a new and equally sizeable user group to make up the difference, or will they shrink into irrelevance, or even fold?

In the case of the pornographers, I suspect that they will in time find a solution. As with Dissident Rightists, pornographers face all kinds of deplatforming and social stigma, and tend to find ways around it. (It helps that they, unlike us, have money to throw at problems).

For example, the pornography industry now has an equivalent to Patreon (OnlyFans.com), as they knew Patreon would give them the boot in no time. When individual pornographers are told by banks or realtors to take a hike, the pornography industry as a whole networks and helps each other out. When legislation is being considered that would clamp down or regulate pornography, the industry includes previews in their DVDs asking viewers to call their representatives to protest—and they tweet about it aggressively as well, to their typically huge armies of followers.

As for Tumblr, only time will tell.

Let us all hope, however, that things end badly for them. If Tumblr crashes and burns because of this, Silicon Valley will assuredly take note that summarily purging a huge set of users of a certain service—and out of the blue at that—can come with very bad consequences.

If Tumblr goes the way of MySpace because of this new move, Twitter will be much less likely to forever ban every troll and pepe on Twitter.

So, let us pray for hard times at Tumblr. And remember, no matter what, one day the powers that be really can just pull the plug—just ask BoobsAreCool.Tumblr.com.