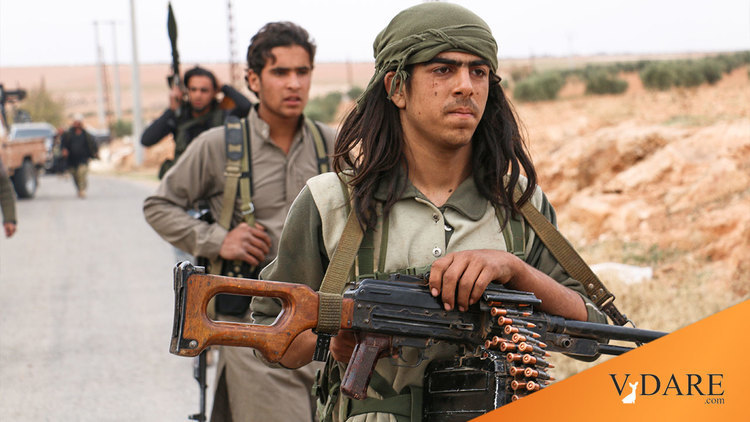 The war on terrorism has lost its focus. It has become a military campaign against the Taliban.

The Taliban are not terrorists. Defeating them will have very little effect on terrorism.

The Taliban are a group of Afghans focused on their own country, not on the West. Using the authority of Islam to create a national unity in place of tribal consciousness, the Taliban are engaged in what the Council of Foreign Relations, the State Department and the World Bank call "nation building."

The National Organization of Women and the Taliban do not look upon one another with equanimity, but the Taliban did not participate in the attacks on the World Trade Center and the Pentagon. The anthrax letters are postmarked in the U.S., not in Afghanistan.

The Taliban are in our bad books because they are "harboring" Bin Laden. Although true, this view is too simplistic to serve as a basis for U.S. policy.

Bin Laden, a Saudi, earned his welcome in Afghanistan by helping the tribes resist the 1979 Soviet invasion. A conduit for CIA money and munitions, Bin Laden recruited Muslims from other countries to fight in the decade-long struggle against the Soviet Army in Afghanistan.

Consequently, Bin Laden is an Islamic hero. As the Taliban are endeavoring to use Islam to unify Afghans, they cannot turn over Bin Laden to the infidel without undercutting their unity effort.

Demonizing the Taliban blinds us to the realities and dangers of the war on terrorism.

The realities are that Bin Laden or no Bin Laden, the U.S. cannot escape Muslim animosity. We are Israel's ally and are perceived as the power behind a corrupt Saudi royal family.

More fundamentally, for the better part of a century influential Muslims have viewed the West as the source of evil and degeneracy. Hassan al Banna, who founded the Muslim Brotherhood, taught that the materialistic West had nothing to offer but sin, sex, drink and showy attractions.

Sayyid Qutb, another influential 20th century Muslim, damned our permissive culture, which he equated to "animal freedom." He taught that the entire world, except for Muslims who resisted Western ideas, was in a state of pagan barbarity.

For decades Muslim schools have interpreted Western culture to students as a temptation to the faithful that, unless resisted, will destroy their religion and their souls.

Devout Muslims are turned off by the provocative attire and sexual promiscuity of Western women, by the West's social acceptance of sexual perversion and its self absorption and lack of discipline and honor. They regard our movies and music as agents of depravity. Muslims look with contempt upon our society as effete and feminized, where manliness is displayed only on sport fields.

President Bush says we are at war with terrorists, not with Islam. But the fact of the matter is that about 25 percent of Islam sees itself at war with us. We will bring a majority of Muslims to this view if our response to terrorism is seen as an attack on Muslim populations.

It will be a victory for Bin Laden if our attack on Afghanistan results in an Islamic revolution in Pakistan and Saudi Arabia.

The U.S. should reconsider its approach and take steps to stop the erosion of its own belief system and national identity. Multicultural immigration and education are far more dangerous to American unity than terrorist organizations in the Middle East.

Bin Laden's views of the U.S. are bland compared to the denunciations of the evils of the white race and hegemonic white civilization that are routinely heard in American classrooms. Bin Laden's anti-American rhetoric has a way to go before it catches up with the tenured America-bashers in our universities.

Muslim terrorists cannot harm us unless our lax immigration policy continues to import them. Barring Muslims from entering the U.S. will do far more to protect us than bombing the Taliban.

A sensible step would be to vet every Muslim or person of Middle Eastern extraction in the U.S. and monitor suspects.

Universities must be reminded that a purpose of education is enculturation, not the creation of hyphenated-ethnic interest groups. "Education" that breaks down the assimilation of citizens to their culture is not worthy of taxpayer and donor support.

If the U.S. intends to fight terrorism at the risk of igniting what Muslims will see as a religious war, we should focus on Iraq and Syria, terrorist-friendly regimes that possess weapons of mass destruction, not on Afghanistan, which has no scientific or technological capabilities.

If the U.S. becomes bogged down in an Afghan civil war between the Taliban and the Northern Alliance, we will achieve our own demoralization and embolden terrorists unimpaired by our efforts.