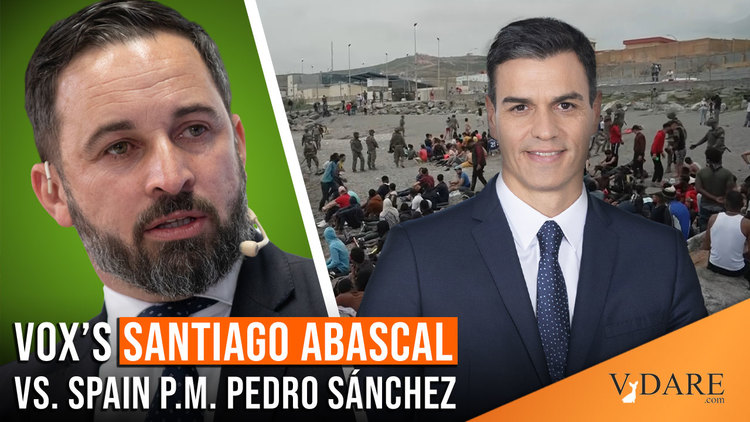 On May 17 and 18, about 8,000 Moroccans and black Africans stormed Spain’s North African enclave of Ceuta, off the northwest coast of Morocco—after Moroccan border guards allowed them through.

Some illegal aliens swam there, but however they arrived, Pedro Sanchez’s Leftist government successfully repulsed and/or captured the invaders and deported them, except for minors [Spain Deploys Military as Thousands of Illegals Invade Spanish Enclave in One Day, by Dan Lyman, InfoWars Europe, May 18, 2021].

Vox, the right-wing nationalist party, saw the chance to hammer the government of Pedro Sánchez for being weak on immigration. Ivan Espinosa de los Monteros, spokesman for Vox in Spain’s Congress of Deputies, delivered a scorching speech that attacked Sánchez—with Sánchez right there listening.

Sure enough, they held the rally.  In his speech Abascal said immigration should be based on 1) Spain's economic needs and 2)the adaptive capacity of the immigrants, pointing out his preference for Latin American immigrants if immigrants are needed. [Abascal, en la manifestación de Vox en Sevilla: «¿Alguien daría el pan a su vecino antes que a su hijo?» (Abascal in Seville Vox Rally: 'Would someone give bread to a neighbor before to his son?' ") by Borja Jimenez, OKDiario, May 24, 2021]

American nationalists could learn a few things from Vox. In less than a decade since its formation, it has grown into the third largest party in Congress.

Mexico’s Human Rights Commission, the CNDH, wants “justice” for Latinos in the United States, which clearly means we can expect more meddling in, and moaning about, U.S. affairs. Sleepy Joe, of course, will do nothing about it.

Rosario Piedra Ibarra, president of the CNDH, gave a call to join forces to eradicate discrimination, racist expressions and abuses of authority that hurt the dignity and rights of the migrants of Latino origin, especially Mexicans who reside in the United States. … [She] emphasized the importance of eliminating the segregation that provokes violence and denies the rights that migrants have.

[CNDH llama a sumar esfuerzos para proteger a migrantes mexicanos en EU  (“CNDH calls to Join Forces to Protect Mexican Migrants in the US”), by Sandra Rojas, Milenio, May 19, 2021]

Piedra didn’t explain what this “segregation” is or how it causes violence, so we must accept her word that it does. Also note her demand for the eradication of “racist expressions,” whatever they happen to be and whoever defines them. Perhaps Madame Piedra might recall that we have a federal Constitution in this country, the very First Amendment of which protects speech, including vaguely-defined “racist expressions.”

Piedra’s outfit is connected to the Georgia Latino Alliance for Human Rights, which will obviously provide the channel for Piedra’s meddling. But in any event, she apparently believes the United States is an awful place for Latinos to live, as Milenio’s Rojas reported:

[T]he president of the CNDH said that the promotion, protection and defense of human rights is fundamental to eradicate the discrimination of the girls and boys, women, indigenous persons and Afro-Mexicans who have migrated to the United States.

If life is so bad here, maybe she should tell Mexicans and other Latinos to stay where they feel more at home? Like ... at home!

Growing Resistance Towards Venezuelan Diaspora In Latin America—even from Left

Rejection of Venezuelans who have massively emigrated in recent years grows all over Latin America in the context of a weak economy and the COVID-19 pandemic.

Venezuelans have been leaving Venezuela for years, though the social class of the emigrés has changed:

All over Latin America, they're getting tired of Venezuelan migrants: "In Peru they are widely rejected by society which associates them with crime and a "plague."" https://t.co/NQkMJMbvoA

“In the beginning it was a migration of the upper middle class,” Venezuelan sociologist Claudia Vargas told AFP. “They traveled by air with their documents in order. But beginning in 2014, poorer classes started to leave the country.”

Now, nearly 60 percent of those who compose the 5.4 million souls in the Venezuelan diaspora are “undocumented.” In other words, they’re illegal aliens.

The largest Venezuelan cohort, 1.7 million, is in neighboring Colombia, followed by Peru with 1.2 million, then Chile and Ecuador.

Peru is now in the midst of presidential elections, with the final round scheduled for June 6. The two candidates are Pedro Castillo of the leftist Peru Party and Keiko Fujimori of the rightist Popular Force.

The Venezuelan question is an election issue, and Castillo, “a left-wing nationalist who leads the polls for the second round on June 6, has promised to deport all illegal migrants within 72 hours after taking power.”

And even the Left objects.

During The Past Three Years, More Than 700 Guatemalans Have Died Trying To Get Into The U.S.

“The U.S. continues as a powerful magnet attracting thousands of Guatemalans every year, seduced by the ‘American Dream',” which is nothing but a job for well-being for their loved ones, and opportunity not found in their country,” Sergio Morales Rodas of Prensa Libre reported [Más de 700 guatemaltecos han muerto en tres años en busca del “sueño americano (“More than 700 Guatemalans have died in three years in search of the ‘American Dream’”), May 21, 2021].

But here’s a statistic that should dissuade the trudging masses of Central America from heading for the U.S. border with Mexico, or at least make them think twice about the journey:

From 2018 to this past April, the Ministry of Foreign Relations (Minex) reports that 701 Guatemalans have perished on the route to the United States. … Of the total, 90 were women and 42 minors.

The majority of the deaths occurred in the U.S. where the conditions of desert crossing are very hostile and include long walks in the middle of the desert or uninhabited zones, and in extreme climatic conditions of cold or heat, according to the time of year.

The hottest time of the year is when the biggest share of deaths usually occur. In the past three years, in the Mexico-U.S. border desert, 343 migrants of various nationalities have perished … 41% between June and September, the hottest months in the northern hemisphere.

But many Guatemalan migrants have also disappeared on the trip, their families suffering and unable to get closure. Minex reports that 190 Guatemalans have been reported as missing in their journey to the U.S., among them 7 women. Humanitarian organizations have reported that kidnapping for human trafficking is one of the principal reasons for the disappearances.

Other dangers the piece reports are these:

Examples mentioned include a smuggler who tried to squeeze ransom from a kidnap victim’s cousin in Mexico, and a Guatemalan kid who was kidnapped and forced to be a transvestite prostitute in Tijuana.

Helpfully, Rodas told the truth: he explained that Joe Biden’s open invitation to everyone on the planet to seek refuge in the United States is the reason the Guatemalans won’t stay where they belong:

The exodus of Guatemalans has increased after the arrival in power of President Joe Biden … after 4 years of the Donald Trump administration.

Univision recently featured a photo essay about a 93-year old Biden Invitee from Honduras who crossed the Rio Grande [Con 93 años y en sillas de ruedas: una anciana cruza la frontera con su nieta hacia EEUU (“With 93 years and in a wheelchair, an elderly lady crosses the border with her granddaughter to the U.S.”) by Univision and AFP, April 30, 2021].

Traveling with her granddaughter and others, the nonagenarian was in a wheelchair. On the Mexican side of the border, fellow illegals took her out of the wheelchair and put her in the raft. Once across, she was back in the wheelchair.

Of course, Univision presented this as an inspiring tale. But should Biden and his pals in the Leftist Mainstream Media encourage Central Americans to drag 93-year-old grandmothers on these dangerous trips?

That’s more dangerous than dragging along 10-year-olds, which is bad enough!