Some immigration patriots were disappointed with President Trump’s first day. (Mind if I just pause here and say "President Trump" a couple of times? I just like saying it. President Trump, President Trump! Thank you.) But as his first week closes, he’s made a flurry of announcements and  it looks as though we shall get "extreme vetting" and a big reduction in settlement of so-called refugees. [Trump signs order to temporarily shut nation's door to most refugees and start 'extreme vetting' by Brian Bennett and Noah Bierman, LA Times, January 27, 2017]

Most of these refugees are of course bogus, as has been amply documented by the two Anns: Ann Corcoran over at Refugee Resettlement Watch, and the indispensable Ann Coulter. But, ever apprehensive that someone out there in listener-land might think I am being unnecessarily hard-hearted when I insert that qualifier "so-called," I feel the need to offer some justification. 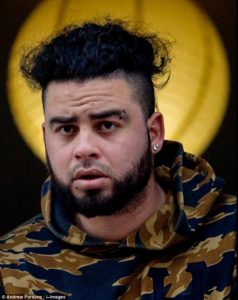 Who he? Well, he's a Syrian refugee, 27 years old, who worked as a translator for British volunteers in the illegal alien camp at Calais, near the English Channel. The so-called "Jungle," where thousands of so-called "refugees" were camped out waiting to be smuggled into Britain, was bulldozed by the French authorities last October, but there are still many illegals in the area, and some new makeshifts camps have sprung up.

So Syrian refugee Mohamed Bajjar was helping the British volunteers, including those who work for an outfit named Care4Calais, which gives food, clothing, and medical care to the illegals. Can you see where this is going?

Yep: before very long, Mohamed Bajjar was having the leg over with Mrs. Moseley. That's right, she's a Mrs. Her husband is a wealthy corporate tax accountant living in northwest England. 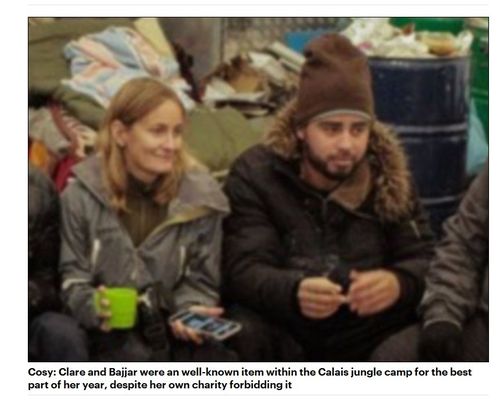 I'd assume Mrs. Moseley's husband was frowning more than most—although looking at her pictures, I might be mistaken on that.

Anyway, there was a big fuss.

As a result of the fuss, people started looking into Mohamed Bajjar's background. Guess what: he was not Syrian, and also not a refugee. He comes from Tunisia, where his family owns a souk—that's a sort of Third World mini-mall—in a prosperous resort city.

And guess what else: Mohamed is already married to a different British lady, 54-year-old Carol Hutchings.

When lovely woman stoops to folly

And finds too late that men betray..

He claimed asylum there by saying he was Syrian … but he had a job at a Coca-Cola factory in Poland and he flitted back to Germany each month so he could get his asylum-seeker's allowance.

Exposed: The lies of the ‘refugee’ who had an affair with a married charity chief. He wasn't Syrian, he came for a wealthy family, and, most staggering of all, he already had a BRITISH wife

The latest I have is that Mrs. Moseley, too has gotten wise to Mohamed—he'd been pestering her for money, too. They broke up earlier this month.

French police actually arrested Mohamed earlier this month on suspicion of stealing Mrs. Moseley's cellphone but he was released without charge, and is now living above a clothes shop in Calais.

There's a story for our times. Oh, I forgot to mention: Before the Jungle camp was dismantled in October, it came out that Mrs. Moseley was not alone in developing intimate bonds with one of the illegals—I beg your pardon, "refugees."  The Daily Mail says that

Several women volunteers had embarked on relationships within the camp and a row broke out over whether those involved were "sexually exploiting" the refugees.

I venture to suggest there is a link here, admittedly a tenuous and speculative one, between this story and the prominence of women like obscenity-spouting billionaires Madonna and last Saturday's million pussyhatted marchers, wearing $150 running shoes and holding $500 cell phones, with more life options than they know what to do with, in the anti-Trump movement. See if you can figure it out.

One possible option for American women who are as dissatisfied with their lot as last weekend's pussyhatted marchers would be to convert to Islam. Life for women under Sharia law is so much more enriching and fulfilling than is the case in the patriarchal oppression of Judeo-Christian society.

Two postulants have taken up that option this week, or at least indicated they are willing to.

On Wednesday, Madeleine Albright, former Clinton Secretary of State. Wednesday this week Ms. Albright tweeted that she would register herself a Muslim as an act of defiance against President Donald Trump's immigration plans:

I was raised Catholic, became Episcopalian & found out later my family was Jewish. I stand ready to register as Muslim in #solidarity.

Whether or not there is any fine print on the Statue of Liberty I cannot discover; but there is no Emma Lazarus poem on the statue. The poem is in the museum located inside the pedestal under the statue—which was a gift from the people of France to commemorate the centenary of our Declaration of Independence —nothing to do with immigration.

I don't think you should be allowed to serve as Secretary of State if you don't know elementary facts like that about our national symbols.

And then there’s Lindsay Lohan, who at this point I think everyone just feels sorry for. Ms. Lohan deleted all her photos on Instagram recently, leaving only her profile picture and the greeting "Alaikum salam," which is Arabic for "And unto you peace." 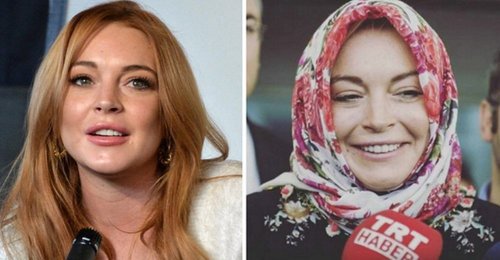 Possibly Ms. Lohan has been influenced by her recent residence in Turkey, where she has been working as a volunteer in refugee camps.

Er, wait a minute … as a volunteer in refugee camps?