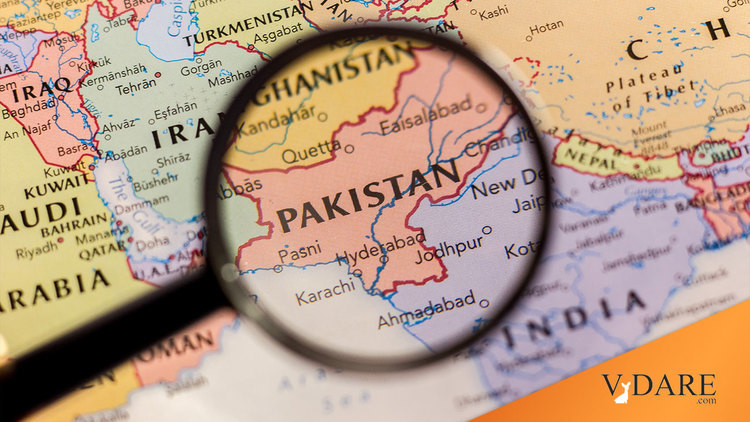 On September 10, 2008,the New York Times reported that, back in July, President Bush had authorized ground incursions and missile attacks to destroy Taliban and Al Qaeda sanctuaries in Pakistan's Federally Administered Tribal Areas.  As the Times noted, "It is unclear precisely what legal authorities the United States has invoked to conduct even limited ground raids in a friendly country."

After the first ground assault on September 3, which lasted several hours and involved two-dozen Navy Seals, the unanimous reaction of Pakistan's democratically elected parliament was to call on its government to repel future U.S. incursions with military force.  Pakistan's army chief, Gen. Ashfaq Kayani, agreed, declaring that his country's territorial integrity "will be defended at all costs."

Seeking to justify future incursions into Pakistan, President Bush announced on September 9 that Pakistan, Iraq, and Afghanistan were "all theaters in the same overall struggle."  But when the U.S. military attempted another ground attack on September 15, employing armed helicopters, it was forced to retreat after coming under sustained fire from Pakistan's army.  The next day, Pakistan's military issued a press release announcing its policy on U.S. incursions: "The orders are clear . . . open fire."

If war with a nonnuclear-armed Iran would be folly, war with a nuclear-armed Pakistan would be a disaster.  It would open a Pandora's box of instability, crises, and conflicts that could engulf neighboring states.  It would undermine U.S. strategic interests abroad and further erode American liberties at home.  Yet the Bush administration has been laying the foundation for such a war for months, and Barack Obama has raised eyebrows with his tough talk about invading Pakistan in hopes of killing Osama bin Laden.

On January 25 of last year, the Washington Post reported that the Bush administration was building eight bases along the Afghan-Pakistan border from which to attack Islamic militants in Pakistan's Northwest Frontier Province.  Defense Secretary Robert Gates stated that "The Pentagon is 'ready, willing and able' to send U.S. troops to conduct joint combat operations with Pakistan's military against al-Qaeda sanctuaries in Pakistan's tribal areas."

Secretary Gates' announcement was disingenuous, coming as it did after Pakistan had publicly rejected the idea of U.S. troops operating inside her borders.  This suggests that the Bush administration was considering unilateral military intervention despite warnings from the Pakistani government that "any unilateral action by the United States would be regarded as an invasion."

Where would the money come from for a war with Pakistan?  The proposed military budget of the Department of Defense grew from $396 billion in 2003 to $440 billion in 2007; an additional 40 percent is now off the books, and this figure does not include the cost of the wars in Iraq and Afghanistan, which the Center for Arms Control and Non-Proliferation estimates at $700 billion.  Meanwhile, the U.S. economy has been battered by rising oil prices, a falling dollar, the subprime mortgage crisis, a credit crunch, a deteriorating housing market, layoffs, a volatile stock market, a mounting national debt and deficit, and a meltdown in its financial sector.

Where would the U.S. government get the necessary troops for such a war?  The U.S. military is already stretched to the breaking point in Iraq and Afghanistan.  Enlistments are down, and reinstating the draft would be politically unpopular and socially divisive.  In Iraq, approximately 156,000 troops still have not been able to defeat the insurgents, and plans to reduce troop levels have been suspended.  Washington is attempting to lower the level of violence against U.S. troops by bribing Sunni tribes to attack foreign jihadists.  While these Sunnis oppose the American occupation of their country, they eagerly accept U.S. money and weapons so they can defeat their political rivals and prepare for a future showdown with their benefactors.  In Afghanistan, the base for the proposed intervention in Pakistan, the United States lacks sufficient troops to roll back a resurgent Taliban that effectively controls the southern half of the country, the homeland of the Pushtuns.  Washington has been forced to call on NATO members for several thousand additional troops—a request not likely to be met.

Both sides of the Afghan-Pakistan border are inhabited by Pushtuns whose combined population of over 38 million is larger than that of Iraq.  In contrast, the number of U.S. troops in Afghanistan is estimated at only 25,500.  Pushtuns in Afghanistan form the backbone of the Taliban and are bound to their brethren in Pakistan by ties of blood, 60 major tribes and over 400 clans, custom and law, the Pushtunwali, and now an Islamic and nationalistic anti-Americanism.  Will the eight U.S. military bases along the Afghan-Pakistan border become eight Dien Bien Phus?

U.S. diplomatic policy toward Pakistan has been self-defeating.  Washington persuaded the Musharraf government to attack alleged Al Qaeda and Taliban militants hiding in the Northwest Frontier Province.  That destabilized the region, radicalized the tribal population, and resulted in the establishment of an Islamic Emirate of Waziristan, which Islamabad was forced to recognize to end the disastrous war.

The February 18, 2008, election resulted in a victory for the secular anti-Musharraf opposition, comprising the Pakistan Peoples Party and the Pakistan Muslim League.  However, hostility to U.S. military intervention is found across Pakistan's political spectrum, government and opposition, Islamists and secularists, pro- and anti-American politicians.  Under these circumstances, how could Washington intervene without causing further damage to the international reputation and strategic interests of the United States?

Although Washington insists it wants a stable Pakistan free from Islamic radicalism, the policy it is pursuing in neighboring Iran is ensuring the opposite.  Endeavoring to promote "regime change" in Tehran, Washington is supporting ethnic secessionist groups in Iran.  Among them are the Baluch, who inhabit adjoining territory called Baluchistan, the largest province in Pakistan, accounting for 44 percent of the country's area.  The Bush administration has enlisted, funded, and armed the Baluch in a Sunni fundamentalist army called Jundullah (Army of God).  From bases in Pakistan, Jundullah is waging a guerrilla war attacking installations and personnel inside Iran.

The Baluch of Pakistan have been fighting for decades for their independence from Islamabad.  By arming them to fight Iran, Washington is giving them the means to resume fighting Pakistan.  Such a policy is undermining Pakistani authority and political stability in Baluchistan.  It is making it more likely that the Baluch of Pakistan, not Iran, will be the ones to achieve their independence.  If Baluchistan breaks away, Sind and the Northwest Frontier Province will eventually secede as well.  The impact of any balkanization of Pakistan on India, Islamic radicalism, and nuclear proliferation would adversely affect U.S. strategic interests in South Asia.

U.S. diplomatic policy toward Pakistan is schizophrenic.  The Bush administration has demanded that Pakistan suppress Islamic fundamentalists among the Pushtuns in the north, but support Islamic fundamentalists among the Baluch in the south.  By sponsoring Jundullah, Washington is, in many ways, recreating the Mujahideen of the 1980's from which Al Qaeda and the Taliban sprang.  This is potentially a greater threat to U.S. national security than the disintegration of Pakistan (though the two may go hand in hand).

The United Nations estimates Iraq's population at 29 million and Afghanistan's at 27 million.  Pakistan's population is more than five-and-a-half times larger.  Washington may wish to fight only Islamic militants in the Northwest Frontier Province, but for all practical purposes it would be at war with 162 million people.  U.S. military operations would also be severely hampered by rugged terrain; limited air, road, and rail transportation; and financial constraints.

An attack on Iran has been prevented, to date, by Defense Secretary Gates and Commander of CENTCOM Admiral Fallon.  The United States has neither the manpower nor the resources for the job, and any attack would endanger U.S. troops in Iraq.  But in September, Secretary Gates said that the United States could have 10,000 more troops in place to intervene in Pakistan "in the spring and summer of 2009."  Admiral Fallon has taken early retirement and has been replaced by David Petraeus, who had been commanding general of the Multi-National Force—Iraq.  Iran has a population of 71 million.  Pakistan's population is more than twice as large.  Iran has one of the world's largest paramilitaries, numbering over 11 million, but its active service strength is 420,000, with a reserve of 350,000.  Pakistan's active service strength is 619,000, with a reserve of 528,000.

The U.S. military would quickly defeat the Pakistanis in a conventional war, but there would be American casualties, and the victory would be hollow, since those Pakistani soldiers who were not killed or captured would likely join the guerrillas in attacking U.S. troops, supplies, and installations.

Then there is Pakistan's atomic bomb.  Would an intervention to eliminate Islamic militants in the Northwest Frontier Province require the U.S. military to seize Pakistan's nuclear warheads to prevent them from falling into the hands of Islamic militants or disaffected Pakistani military officers?  If the U.S. military did not seize those warheads, would the government of India exploit a U.S. intervention to launch a surgical strike to seize or destroy the nuclear weapons of its political rival?

In February 2003, the U.S. Navy Center for Contemporary Conflict estimated Pakistan already had between 35 and 95 nuclear bombs.  These warheads have not been placed on missiles but are kept separate in a secure facility.  Pakistan has modified F-16 fighter jets to carry warheads.  Unless all warheads and modified F-16s are secured, the threat of a suicide pilot dropping the bomb on U.S. forces would be very real.  And, should India join in the intervention, New Delhi could also be targeted.

Even if the Indian government takes no action, it will still be perceived by many Muslims in India as an accomplice in Washington's efforts to weaken and humiliate Pakistan.  India still has not recovered from the Muslim-Hindu bloodletting that occurred in Gujarat, an Indian state bordering Pakistan, in 2002.  A U.S. military intervention in Pakistan would mean an upsurge in radicalism among Muslims in India that would increase political volatility, outbreaks of communal violence, and economic difficulties for the country as a whole.

The U.S. military might be able to secure Pakistan's nuclear weapons, but even if Washington could redeploy all U.S. forces to Pakistan, it would still be unable to occupy a country of 162 million hostile people.  Yet it would have to occupy the country in order to have a realistic chance of extricating Islamic militants.  Thus, any intervention would result in American casualties but would not achieve any desirable political ends.  It would only win converts for the cause of radical Islam; destabilize the subcontinent and much of the Middle East; ensure that anti-Americanism dominates popular passions in Iraq, Iran, Afghanistan, and Pakistan for the foreseeable future; cripple the U.S. military; weaken an already feeble U.S. economy; and play havoc with international markets.