Obama's Voter Fraud Facilitation Policy: Does The GOP Have The Courage To Resist? 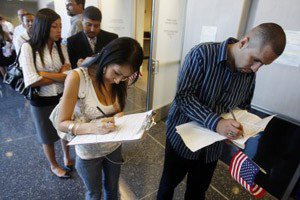 Voters - But are they Citizens?

At the end of last week, the Miami Herald was running stories gloating about the attack by the Department of Justice on Florida’s attempt to update its voter roll. I discussed them in Is Florida's Governor Scott Caving To Obamacrat Voter Fraud Facilitation? (My answer: Yes).

Apparently moved by a glimmer of fairness, the Herald subsequently published How Obama aided and abetted Scott’s voter purge mess, By Marc Caputo 06.03.12

First, Obama’s Department of Homeland Security stonewalled the state’s noncitizen voter hunt for almost nine months by refusing Florida access to an immigration database. Then, on Thursday, Obama’s Justice Department ordered the purge to halt, in part because time had run out.

One former DOJ lawyer and critic, conservative J. Christian Adams, blogged that the former Obama appointee in charge of the voting section announced early on that it would ignore Motor Voter’s purge obligation.

“We have no interest in enforcing this provision of the law,” he quoted Julie Fernandes as saying in 2009 when she was an assistant attorney general. “It has nothing to do with increasing turnout, and we are just not going to do it.”

…campaigned in 2010 for an Arizona-style immigration law that could require local police to start hunting illegal immigrants.

He did—and totally reneged. The Scott record on immigration policy is a Treason Lobby credential.)

Under the anti-white Eric Holder, Obama’s DOJ has been aggressively and systematically impeding any effort to confine voting to those truly entitled to vote. The conclusion is inescapable: the Obamacrats want to maximize the opportunity to cheat. The Washington Times recognized this yesterday in Editorial: Illegal voters: The winning edge Justice Department works to allow fraudulent votes June 4, 2012

Of the 1,600 registered illegals in Miami-Dade County thus far identified, around two-thirds have actually cast ballots…A study by the Pew Center on the States, released in February, found 24 million flawed voter registrations nationwide, or one in eight registrations….24 million is larger than the winning margins of the last five presidential races combined.

Voter fraud exists (H/T American Rattlesnake—no doubt it was ok to charge those Democrats since they are white). Our old friend John Fund has even written a book about it. And sloppy voter roll maintenance is rampant—RedState just came up with Top Colorado Democrat Currently Registered to Vote in Both D.C. and Colorado By Aaron Gardner June 4th 2012. The enterprising guys at Breitbart even managed to get offered Eric Holder’s ballot in the DC elections this spring!

The “arguments” the Left are mounting against ensuring valid voters are insultingly thin. No one is better positioned to produce proof of citizenship than a newly naturalized immigrant—he has just been to a great deal of trouble and knows how valuable those papers are. Native-born Americans may have a little more trouble locating Birth Certificates, but getting them is actually quite easy (if you want to). Furthermore, the great bulk of the less able are on social welfare programs of various sorts which need identification. And the argument that photo ID is an excessive requirement is just laughable for anyone who ever travels around America - they are demanded all the time. Mexico requires them to vote.

For every spaced-out individual Eric Holder & Co are pretending to protect, scores—perhaps hundreds—of illegitimate voters will be enabled.

And that of course is what the Obamacrats want.

The Left is expecting to pull off this scam because they are counting on Hitler's Revenge. They expect that the GOP leaders will lack the moral courage to say that Obama is not a nice Black Man and is planning to take advantage of his popularity with Hispanics and Blacks to cheat.

The Left may well be right—Kris Kobach being a heartening exception.