Superficially, April’s jobs numbers looked good for the Obama Administration, but the details are (again) so weird that even liberals seem worried: Rex Nutting, MarketWatch’s dogmatically Democrat commentary editor, warned The household survey is insane| Don’t believe the drop in the unemployment rate to 6.3% (May 2)

Businesses reported adding 288,000 jobs, the unemployment rate fell while the labor force participation rate, after edging up for a few months, revisited its 35-year low. But the “other” employment survey, of households rather than businesses—the only report where immigrant and native-born American employment figures are broken out separately—reported a job loss in April. Our analysis of household survey data finds that, very unusually, immigrants bore the entire brunt of this loss.

Over the long haul the two employment surveys will track close to one another. In any particular month, however, the two surveys often report wildly divergent job scenarios. April was one of those months.

But while we share Nutting’s skepticism, we have no choice but to use household survey numbers in our analysis of the April job market. Thus our New VDARE.com American Worker Displacement Index (NVDAWDI) shows a significant decline in April—falling to 108.2 from 109.4 in March.

Of course, over the entire Obama era—January 2009 to April 2014—the displacement of native-born American workers by immigrants is painfully evident in the NVDAWDI graphic: 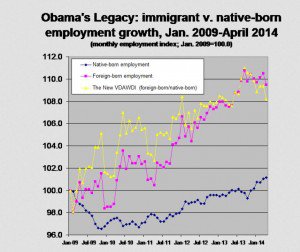 A more detailed picture of American worker displacement, April 2013 to April 2014, is seen in seasonally unadjusted data published in the BLS monthly job report: Over the past 12 months: According to the table, the foreign-born working-age population increased by 549,000 in the past year. This is far less than would be expected given the current legal influx of 90,000 per month.

Yet another reason to distrust the April Household Survey.