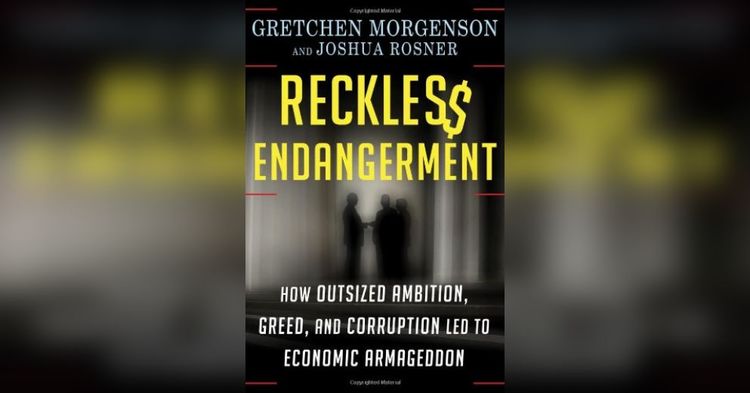 , an entertaining account of the through-going financial fraud that gave us the financial crisis. Taibbi shows that the US “superpower” can match any third world backwater in the magnitude of greed and fraud that is endemic in business and government. I would not be surprised if Taibbi’s book motivated the more aware participants of Occupy Wall Street.

Morgenson and Rosner tell the story again, but with less drama and provocation. Possibly, it might be more acceptable to those gullible Americans who wrap themselves in the flag and refuse to believe that their country could ever knowingly do anything that is wrong.

I am not suggesting that Morgenson and Rosner pull their punches. To the contrary, the authors deliver enough knockouts to be contenders with Taibbi as world champions in exposing the reckless fraud that the US financial sector and its regulators now epitomize.

The financial crisis, which is very much still with us, did not result from accident or miscalculation; neither did it result because of a flaw in Alan Greenspan’s theory, as he told Congress when a feeble effort was made to hold him accountable. It was the intentional result of people motivated by short-term profits who wanted to get theirs and get out.

As Reckless Endangerment shows, fraud characterized every stage of the process from the fraudulent borrower incomes and credit scores that mortgage issuers gave to unqualified buyers, through the securitization of the mortgages and their triple-A investment grade ratings by the rating agencies (Standard & Poor’s especially, but also Moody’s and Fitch) to the investment banks that sold what the banks knew was junk to investors around the world as investment grade securities. Indeed, Goldman Sachs was simultaneously betting against the mortgage derivatives that it was selling to clients.

Investment banks, such as Goldman Sachs, which once considered it a matter of honor to represent the interests of customers, took advantage of the trust that had been built up in the past to commit fraud against customers in order to advance the banks’ short-term profits and the out-sized multi-million dollar managerial bonuses that these fraudulent profits produced.

Morgenson and Rosner provide a number of unique accounts of how those benefitting from fraud were able to defeat laws that were passed that would have held them to account. For example, the state of Georgia passed perfect legislation that held predatory lending to account. William J. Brennan Jr. and Georgia Governor Roy E. Barnes got the Georgia Fair Lending Act through the state legislature. It was a model for other states. As the federal regulators had thrown in the towel, the state laws would have prevent the worst part of the financial crisis, it not prevented the crisis altogether.

The Georgia law only lasted a few months, because the rating agencies saw that their enormous profits from issuing fraudulent investment grade ratings were threatened by the law. The corrupt rating agencies mischaracterized the consumer protection act as a jihad by regulators. Standard & Poor’s declared that it would no longer allow Georgia mortgages to be placed in mortgage securities that it rated.

These kind of mafia strong-armed tactics in order to protect at all costs the short-term mega-bonuses that drove the totally fraudulent system have never been held accountable or punished. Totally innocent people are held indefinitely and tortured by the US government for no other reason than to convince the gullible public that they are endangered by terrorists, but those who wiped out the home ownership and retirement pensions of millions of Americans now hold high and honorable positions on corporate boards and US regulatory agencies.

Federal regulatory agencies totally failed. Brooksley Born tried to use her statutory authority to regulate over-the-counter derivatives, but she was blocked by the Federal Reserve chairman, the US Treasure secretary, and the SEC chairman and forced to resign. As University of Chicago Nobel economist George Stigler predicted, regulatory agencies are captured by those who are intended to be regulated. This was the case.

Regulators turned a blind eye to obvious criminal fraud, and were rewarded with lucrative positions in the financial community. The same for the US senators and representatives who repealed Glass-Steagal and other financial regulations.

For example, former US senator Phil Gramm who spearheaded the repeal of the Glass-Steagall Act, which separated commercial from investment banking, the repeal of which set up the financial crisis, was rewarded by being made vice chairman of the mega-bank UBS, a Swiss global financial services company.

What Taibbi, Morgenson and Rosner make clear is that while monster criminals continue to collect their multi-million dollar annual incomes, depressed single mothers, deserted by the men who fathered their child, are sent to prison for having small quantities of illegal drugs to boost their depressed spirits, and their children are put out to adoption.

This is “justice” in America where there is “freedom and democracy.”