I don't know whether Trump Derangement Syndrome has reached Peak Hysteria yet, but this week it definitely attained what we math geeks call a "local maximum." That means, while it may not be the tallest peak in the mountain range, it's taller than anything in its immediate vicinity.

This week our President decided that FBI Director James Comey had been doing somewhat too much inward micturition and not enough of the outward kind, so he fired him.

That is perfectly constitutional. Comey was head of a federal agency reporting to the Executive Branch; the President is chief of that branch; there is no impropriety or unconstitutionality.

You'd never know that from the Establishment's reaction. Politicians and pundits were weeping and rending their garments everywhere you looked. One major New York tabloid, the Daily News, ran a cover saying, in the largest type they could fit on the page, Coup de Trump.

That's a metropolitan subeditor's notion of a clever play on words, in this case the words coup d'état, an overthrow of the state by force. Since d'état means "of the state" while de Trump means "of Trump," the actual implication of the Daily News headline to an educated reader (assuming the Daily News has one) would be that Trump had been overthrown by force.

That is not what happened, except in the fever dreams of our Trump-derangement-syndrome-affected elites. They couldn't help but verbalize their wishful thinking, though. The coup motif was a common one, by no means restricted to the Daily News. "Donald Trump Is Attempting a Coup," gasped Bill Moyers on his website. "A coup in real time?" asked Yale Professor of History Timothy Snyder [Email him]rhetorically at the CultMarx website Salon.com. The firing of Comey was, said this Ivy League professor, quote: "an open admission of collusion with Russia." [A coup in real time? by Chauncey DeVega, May 12, 2017]

Atlantic editor David Frum called it "a coup against the FBI "  on Twitter. That one left me really confused. What, the FBI should be running the country, but Trump's overthrown them?

As I said, probably not peak hysteria yet—that will have arrived when Yale professors and Atlantic editors run screaming naked through the streets while tearing their flesh with billhooks; but definitely a local maximum.

Thoughtful commentary on the firing—I mean, the small percentage of commentary that contained something other than shrieking and sputtering—concentrated on Trump's timing, wisdom, and motivation. Here's my take on those three aspects, taking them in turn:

If it was a right thing to do, the timing of the doing is secondary. Sooner would have been better; but better late than never. Back in March I noted  North Korean dictator Kim Jong-un's purge of his secret police chief Kim Won-hong. I said how remarkable it was that the top cop was still alive, when senior officials who run afoul of Kim Jong-un are usually executed by some imaginatively gruesome method. How odd, I said, that the secret-police chief had merely been placed under house arrest. (He has since been sent to a camp for "re-education".)

But that's the thing with relations between a national leader and his secret-police boss, as LBJ understood. The secret-police boss knows far more about what's going on, at a much greater depth of detail, than the leader does. He doesn't just know where the bodies are buried: he knows how deep they are buried, and what was buried with them, and what was done to them that made it necessary at last to bury them, and who did it.

From the leader's point of view, the secret-police chief is a cargo of dynamite, to be handled with extreme care. 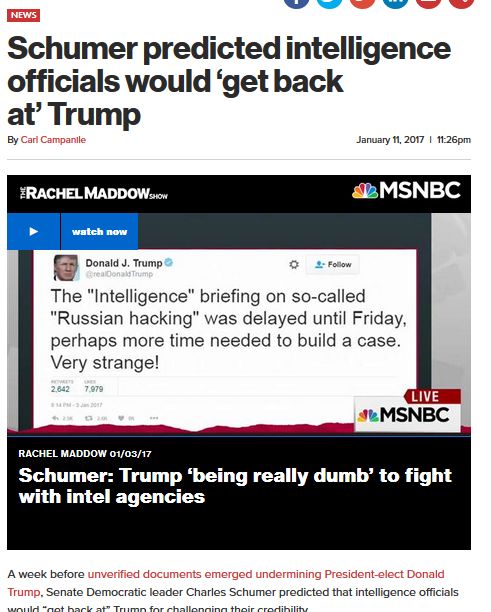 The money quote here is one I retailed back in January, from Senator Chuck Schumer. Schumer is, as I noted at the time, a repulsive creep, but he nailed this one in a TV interview when asked about unkind things candidate Trump had said about the spooks:

Let me tell you, you take on the intelligence community, they have six ways from Sunday to get back at you. So, even for a practical, supposedly hard-nosed businessman, he [that is, Trump] is being really dumb to do this.

Schumer predicted intelligence officials would ‘get back at’ Trump, By Carl Campanile, NY Post, January 11, 2017

So on the wisdom point, I'm shaking my head. Donald Trump may, and I hope will, go down in history as a successful President, but I doubt he will be regarded as one of the wisest. I'm sticking with my LBJ analogy. Comey just wasn't sufficiently on-side; or the President thought he wasn't, which is functionally the same thing.

Other opinions were on offer from the commentariat. Ann Coulter told her Twitter followers, perhaps not entirely seriously: "Comey firing is a red herring to distract from the fact that Trump hasn't started building the wall.” Sorry, Ann, and I want that wall as much as you do, babe, or very nearly as much; but that's a stretch. I'm sticking with LBJ.

Out on the foam-flecked Left—which is to say, well-nigh all the Main Stream Media pundits and political Establishment—that Yale professor's opinion was the default: Comey was getting too close to the truth about candidate Trump's collaboration with the Russians to rig last November's election.

This business about the Russians is by now a psychiatric-level obsession with our elites, a King Charles's head. That's in spite of the fact that after months of furious digging there is not a shard or fragment of evidence for it, not a jot nor a tittle. And in spite of the further fact that it makes no strategic sense whatsoever from the Russians' point of view—a Clinton presidency would have suited them better. And in spite of the yet further fact that, according to me, it wouldn't have mattered a damn if there had been Russian attempts to interfere in our election. Mexico interferes in our elections all the time and no-one except VDARE.com’s Allan Wall ever complains.

I suggested back in March that the President throw this Russia stuff right back in the elites' smug weasel faces by making the Russian ambassador an honored guest at all cabinet meetings. In the same spirit of defiance, I now tender a further suggestion.

Mr. President, you are in need of a new FBI Director. Please consider appointing Russian ambassador Sergey Ivanovich Kislyak to this position.

Ambassador Kislyak is a genial and worldly fellow you should have no trouble getting along with. As a former diplomatic functionary of the U.S.S.R., I'm sure he is well acquainted with intelligence procedures and protocols. An ideal candidate!

You'd probably have to grant him U.S. citizenship; but I believe that can be done on an expedited basis by a simple Act of Congress.

The upside for you would be that it would drive the opposition into shrieking, moon-howling madness. The downside for our country would be … nothing at all.

On any reasonable scale of badness, though, its badness fades to insignificance, to nothing at all, by comparison with really really bad ideas: ideas like continuing mass Third World immigration, or restarting the Cold War with Russia.

A nation can survive having a foreigner of doubtful loyalty in charge of one of its law-enforcement agencies, but it can't survive having its population replaced by alien peoples.

If that happens, the country is no longer what it was. It's a different country.