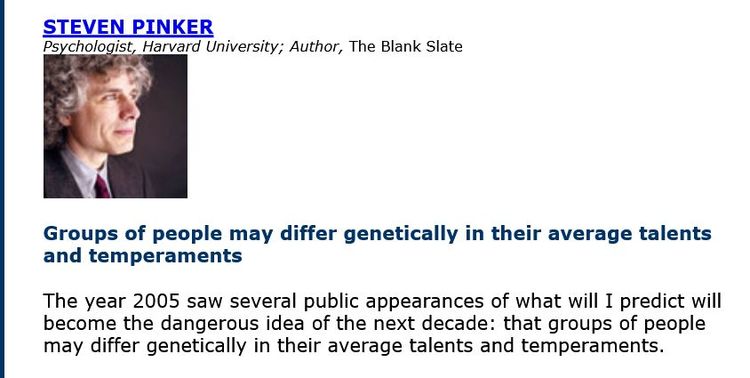 "It's The End Of The World As We Know It"

John Brockman, the leading literary agent for science writers, runs an interesting website to promote his clients called Edge.org. Each year, he asks a question and posts over 100 responses from prominent researchers and authors.

For 2006, Brockman asked, at the suggestion of one of the superstars in his stable, Harvard professor Steven Pinker, author of the bestsellers How the Mind Works and The Blank Slate:

"WHAT IS YOUR DANGEROUS IDEA?

"The history of science is replete with discoveries that were considered socially, morally, or emotionally dangerous in their time; the Copernican and Darwinian revolutions are the most obvious. What is your dangerous idea? An idea you think about (not necessarily one you originated) that is dangerous not because it is assumed to be false, but because it might be true?"

Probably Pinker has been mulling this question over since the Larry Summers brouhaha a year ago.

Summers, the Harvard president and former Treasury Secretary, had helped recruit Pinker away from MIT in 2003 so that he could move from studying the evolution of language to all of human nature, in the tradition of Harvard's grand old man of the life sciences, Edward O. Wilson.

Later, not surprisingly, Pinker emerged as the leading defender of Summers after the Harvard President got into $50 million worth of trouble for daring to suggest that discrimination isn't the only reason men dominate the science, engineering, and mathematics faculty at Harvard.

So, here is Pinker's answer to his own question:

Perhaps Pinker read in a 2004 VDARE.com article what one of his most distinguished predecessors in the Harvard Psychology department, the late Richard Herrnstein (co-author of The Bell Curve), said upon being granted tenure at Harvard. According to Charles Murray's obituary:

"For Dick, being a tenured professor at Harvard was not just the perfect job, but the perfect way to live his life.

"It was too good to be true; there had to be a catch. What's my part of the bargain? he had asked himself.

"'And I figured it out,' he said, looking at me with that benign, gentle half-smile of his. 'You have to tell the truth.'

Pinker cites four examples from 2005, each of which we've devoted one or more articles to here at VDARE.com:

"Advances in genetics and genomics will soon provide the ability to test hypotheses about group differences rigorously."

Pinker concludes that this prospect

"… is one that the current intellectual community is ill-equipped to deal with."

For the purveyors of the reigning dogmas, who have devoted decades to demonizing anyone who points out the impact of genetic diversity on modern life as a threat to civilization, the onrushing tidal wave of DNA evidence must seem apocalyptic.

In the words of R.E.M's hit 1987 song, to the predominant intellectuals, "It's the end of the world as we know it."

"Whether or not these hypotheses hold up (the evidence for gender differences is reasonably good, for ethnic and racial differences much less so), they are widely perceived to be dangerous. Summers was subjected to months of vilification, and proponents of ethnic and racial differences in the past have been targets of censorship, violence, and comparisons to Nazis. Large swaths of the intellectual landscape have been reengineered to try to rule these hypotheses out a priori (race does not exist, intelligence does not exist, the mind is a blank slate inscribed by parents)."

These assertions might strike you or me as potentially contradictory. But logical consistency is not much valued in today's media marketplace. According to his widow's malpractice suit against his doctor, Gould

"earned $300,000 a year from speaking engagements alone, that 'a seven-figure income was his norm,' and that when he died he was about to enter into a book contract for more than $2 million."

One of Gould's most prominent successors at telling the intelligentsia what they want to hear about human evolution is UCLA geographer and physiologist Jared Diamond. He is "the epitome of the celebrity scientist" according to his lecture agent.

Before attaining that exalted status, Diamond developed many interesting and useful ideas. But the notion that made his fortune was, predictably, among his weakest.

In his 1997 Pulitzer Prize-winner Guns, Germs, and Steel (which he modestly subtitled The Fates of Human Societies), Diamond set out to disprove what he defined as "racism." Ruling out a priori the concept that genetic differences might contribute to say, the wealth of Europe versus the poverty of New Guinea as too "loathsome" to consider, he attempted to affirm the empirical equality of humanity by showing the environmental inequality of the continents.

Diamond laboriously demonstrated how divergent the continents are. But, as I pointed out in 1997, this merely raised an obvious question that he had no answer for: If the continents are so disparate, wouldn't the various families of humans naturally become genetically adapted to their wildly differing homelands through natural selection?

Unfortunately for the old guard, there are numerous ambitious young scientists out there who view smashing the prevailing prevarications as great fun. One of them told me last week how lucky he is to be working in the field of genetics in 2006—when new data is pouring in every week, and major discoveries are lying around waiting to be picked up, like gold nuggets in the Sierra Nevada streams in 1849.

And will all this mean, as the conventional wisdom retailers darkly warn, Armageddon, the end of the world as we know it?

"People are surely better off with the truth. Oddly enough, everyone agrees with this when it comes to the arts. Sophisticated people sneer at feel-good comedies and saccharine romances in which everyone lives happily ever after. But when it comes to science, these same people say, 'Give us schmaltz!' They expect the science of human beings to be a source of emotional uplift and inspirational sermonizing."

What the researchers are uncovering as they scrape away the blather of the Goulds and Diamonds is a world we already more or less know, the one we all live in every day.

The human race has its flaws. But the truth about ourselves is not so horrible that we must be shielded from it by self-appointed sages who get rich fabricating falsehoods.