Garett Jones’ HIVE MIND: How Third-World Immigration Into The West Threatens Prosperity And Progress For The Whole World IQ matters. And it doesn’t just matter for individuals—the IQ of your country is even more important than your own IQ when predicting your level of wealth. This obviously has massive implications when it comes to immigration, because intelligence differences exist between groups and so the kinds of groups admitted have a huge impact on the quality of life in that country. And the case for why this is so is ably made in Garett Jones’s Hive Mind: How Your Nation’s IQ Matters So Much More Than Your Own.

The highest IQ countries are on average eight times more prosperous than those with the lowest scores. The chart below from the book illustrates that point. 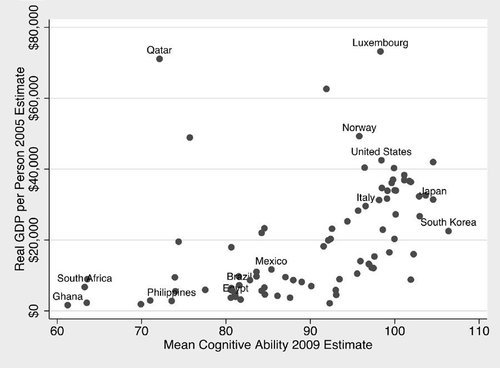 Jones (right) an economist at George Mason University, succeeds in explaining why this is the case. Relying on previous studies using laboratory experiments and other kinds of data, he shows that smarter groups of people are more cooperative, more patient, and more likely to choose rational economic policies through the political process. All of these facts have important economic implications.

Jones also discusses the “O-ring” theory of productivity, the idea developed by that groups are often only as strong as their weakest link. (The name comes from the 1986 Challenger disaster—the space shuttle exploded because one of the components, a single O-ring).

Imagine a company making vases. It takes two people to make a vase in one hour. If either worker drops the vase, it is ruined. Now imagine that a company has four workers, two of them high quality individuals (Hi) that never drop a vase, and the other two are low quality workers (Lo) that drop a vase 50 percent of the time. How should you split up the teams to maximize efficiency?

In an O-ring industry, society as a whole gains when the highest quality workers are on the same team. Societies with lower IQs are those where a higher percentage of the workforce is likely to be of low quality, which implies that many of their industries will be exceedingly inefficient.

The O-ring is one of those economic theories that, once you understand it, you start to see everywhere. When considering how to combat crime, society must take into account the capabilities and intentions of its most dangerous members. Public schools dedicated to educating all children must dumb the curriculum down so as not to leave behind the dullest students. And, as can be seen today in many universities, the level of discourse of a community is sometimes held hostage to the most disruptive, and often mentally ill, activists.

The worst people have a wildly disproportionate effect on the overall standard of living. The lower a country’s average IQ, the more people you have on the extreme left end of the bell curve.  Furthermore, Jones argues that higher IQ groups, by having individuals that are better behaved, create conformity norms that create positive externalities for the rest of society.

Jones explicitly tells us that he has not set out to explain why some nations have higher IQs than others. The closest he comes toeing the PC line is when at several points in the book he expresses his hope that eventually all nations of the world will raise their IQs to the level of East Asia. But considering that it would have been much less risky for Jones to pretend that there are good reasons to believe that IQ differences between groups are completely environmental in origin, he deserves credit for not explicitly doing so.

In fact, the way he lays out the evidence should lead most rational observers to the conclusion that genetics are a major driving force behind group differences in IQ. The discussion on sub-Sahara Africa is particularly illuminating. Richard Lynn and others have argued that the average IQ of that region of the world is about 67. Although critics contend that Lynn relies on flawed studies, when Dutch psychologist Jelte Wicherts and his coauthors went back and eliminated the studies that they thought were of low quality, they came up with an estimate of 82.[ A systematic literature review of the average IQ of sub-Saharan Africans. Intelligence, 2010PDF] As Jones points out, that means that at best the average sub-Saharan African is at about the 12th percentile relative to Western populations.

While it may seem reasonable to think that poverty is the reason that African IQs are so low, Jones notes that already by the 1960s scholars were struck that residents of Taiwan and Hong Kong, despite living in extreme poverty, had IQ scores that were higher than the European average. China remains poor by Western standards, yet outscores all non-East Asian countries that are at a similar level of development. The hypothesis that wealth is the primary reason behind group differences cannot account for these facts, while a theory that genetics cause such disparities can.

The implications of all this for the immigration debate seem pretty straightforward. Yet after about 160 pages arguing that low IQ individuals make their society worse, Jones ends his book by calling for more immigration from poorer countries! His argument: moving people to richer countries is a surefire way to improve their income. To be fair, Jones does also go on to say that in the long run this can degrade the institutions of the receiving countries, but he appears to on balance think that wide scale immigration to the developed world does more good than harm.

So do immigration patriots have any ways to answer this kind of case for immigration, made in universalist terms? After all, many who examine Jones’s evidence will arrive at the opposite of his conclusions.

And indeed, it seems even Jones may have changed his mind in the time since he wrote the book. He is now arguing that if immigrants cause the slightest decline in the institutions of First World countries and if this reduces research and innovation, that alone may pretty quickly wipe out the gains to the immigrants themselves. [Are the global benefits of open borders a fallacy of composition? Three examples, by  Garett Jones June 2017]

Jones’ Twitter feed also suggests much greater openness towards restrictionist arguments than his book does, for example , this:

The answer seems obvious: Humanity owes practically all of its scientific, moral, and technological progress to a small fraction of countries. While large scale immigration from poorer to richer states may bring benefits that are real to the migrants themselves, it threatens to disrupt the social arrangements that have over the last century more than doubled human life expectancy and created a level of peace and prosperity that would have been unimaginable a few generations ago.

Even those who believe that it is immoral to prioritize the well-being of one’s fellow citizens should consider how mass migration might threaten the values and progress that all reasonable people hold dear.

Jeremy Cooper is a specialist in international politics and an observer of global trends. Follow him at @NeoNeoLiberal.