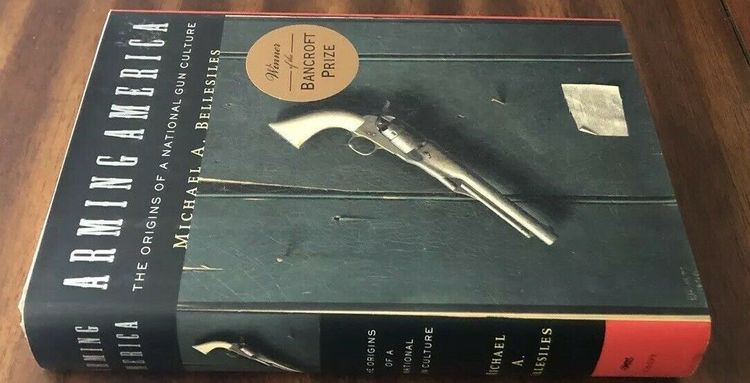 One by one, the superstitions of liberalism are crumbling into the sea like the towers of lost Atlantis. Last month anthropologist Franz Boas, a patron saint of the liberal view of race, bit the deep waters when one of his major studies turned out to be a fraud. So did Margaret Mead, one of Boas's major disciples and also a pillar of liberal views of sexual liberation. Then there are all the apologists for characters like Alger Hiss, the Rosenbergs, J. Robert Oppenheimer, and others, all of whom are now known to have been secret communists and spies to boot, despite decades of yelling and screaming by their defenders that they were just saintly progressives hounded by McCarthyite fascists.

Now, just last week, yet another liberal myth, one barely a couple of years old, as well as the mythologist who fabricated it gurgled down into the oceanic depths.

The latest liberal fraud was the claim of Emory University "historian" Michael A. Bellesiles in his 2000 book, Arming America: The Origins of a National Gun Culture, that most people in early American history really didn't own many guns. The reason the left swallowed this claim—dismissed as preposterous on its face by real experts on firearms history—was that it appeared to bolster the enemies of the right to keep and bear arms. If gun ownership is a fairly recent habit in our culture, then it could not have been considered necessary to a free republic by the Founding Fathers and the authors of the Second Amendment.

Mr. Bellesiles' book at once became a holy relic in the temples of the left. Columbia University awarded it the Bancroft Prize, probably the country's most prestigious award for historical scholarship, and such bigwig academics and writers as Edmund S. Morgan and Garry Wills hailed the book as a marvel of learning.

But to anyone with a balanced mind, there was something fishy. When critics clobbered Mr. Bellesiles' book, it turned out that the Emory professor was unable to substantiate several of the major claims his "research" was supposed to have proved. Unable to identify the sources for some of his conclusions, he claimed his data had been destroyed in a flood in his office. Scholars couldn't locate records on which he was supposed to have relied. It turned out they had been destroyed decades before he claimed to have examined them.

Aside from hostile reviews by skeptical scholars, [See James Lindgren's Yale Law Review piece here.] the William and Mary Quarterly in January published a symposium that cast even further doubt, not just on the truth of Mr. Bellesiles' conclusions but on his very honesty as a historian.

Finally last week the last remaining pillar crumbled. A committee of scholars composed of three major academics from Harvard, Princeton, and the University of Chicago reported that the Bellesiles book showed "evidence of falsification," "egregious misrepresentation," and "exaggeration of data." The Emory professor's "scholarly integrity is seriously in question," they concluded. Mr. Bellesiles submitted his resignation from the university faculty the next day. [Full report in PDF format]

Yet die-hard defenders of the frauds of the left were still swinging in Mr. Bellesiles' defense. The Nation magazine, which defended the innocence of convicted perjurer Alger Hiss for decades after two trials and a mass of new scholarship showed him to be guilty, carried an article by editor Jon Wiener that tried to make out that Mr. Bellesiles was merely the innocent victim of the omnipotent and mysterious "gun lobby"—mainly because NRA president Charlton Heston was outraged by the book's foolish claims when he first read about them.

Presumably, Mr. Wiener will soon try to prove the NRA bribed the three scholars at Harvard, Princeton and Chicago to issue their damning report.

As for Mr. Bellesiles, he has shown himself more than willing to play the role of martyr as what Mr. Wiener calls "the target of a campaign to destroy your work." In his defiant statement last week,[PDF] he compared himself to those attacked by "Holocaust deniers."

When you've got the entire establishment on your side, why shouldn't you be defiant?

Mr. Wiener points put that Mr. Bellesiles is preparing a second edition of his worthless book for Vintage, the prestigious paperback arm of Random House.

And so far there's no breath of retraction or apology from the reviewers whose shameless trumpeting raised the book to glory in the first place.

Nor is there any suggestion from Columbia that it plans to reconsider the Bancroft Prize.

[VDARE.COM note: Email Lee Bollinger, president of Columbia University, bollinger@columbia.edu, and ask him if he's planning to rescind the Bancroft prize awarded to Michael Bellesiles.  Bollinger has previously featured in VDARE.COM as a Christmas-abolishing P.C.  Grinch. Random House at this moment has this blurb on its website:

"Painstakingly examining the historical record, Bellesiles shatters the myth of our gun-toting forefathers. Most early settlers were indifferent or hostile toward guns, which until the middle of the nineteenth..".

That's what happens when the dominant ideology of the nation is nothing more than a gigantic tissue of deceit and fraud.

But sooner or later, despite all the cover-ups and denials by the elite that relies on the big lies liberalism pushes, the truth will out, and the powers and policies that liberal lies support will crash with them.